Callers Weigh in on “The Flight 93 Election”

RUSH: We are gonna start on the phones at Columbus, Ohio, with J.R.  Great to have you, sir.  You’re up first.  Hi.

CALLER:  Hello.  Huge thrill, Rush.  Honor to speak to you.  After listening to this for the last 20 minutes, a great, great interview, I don’t think conservatives will have a call to arms until there is a major meltdown that affects their own life and literally comes right to their door, and I find myself (unintelligible) and I’m just trying to provide for my family.

RUSH: How old are you?

CALLER:  No, I have a huge sense of crisis, huge, and my wife gets sick of me saying it sometimes.  My closest friends around me agree with me, but even I don’t find myself, you know, other than my little world around me, I’m not affecting anything outside of my little universe.

RUSH:  Well, but I thought I heard you say that there are people who don’t think there’s a crisis.  Did I misunderstand you?

CALLER:  Oh, yeah, I think you misunderstood.  No.  No.  The people around me believe there is a crisis, Rush.

RUSH:  The people around you believe there is?

RUSH:  Okay, you need to start at the beginning. I’m totally confused.  It’s not your fault.

RUSH:  Okay.  So you don’t think — the meltdown has yet to happen, we’re in a crisis but there’s no meltdown yet?

CALLER:  Yes.  That is correct.

RUSH:  Okay.  The mistake I was making was assuming you meant they mean the same thing, that crisis equals meltdown.

RUSH:  Well, why do you think we’re in a crisis?

CALLER:  Well, I just see what’s going on. I’ll start with my kids’ school.  They’re 12 and 14.  I see the stuff that they’re coming home with in their history books — by the way, I love Rush Revere — but that is one small thing.  The other thing is I’m self-employed. I’m on now my third health insurance company in four years, and I just got my letter from Aetna saying that I am now gonna be dropped from Aetna here in Ohio.

RUSH:  Okay.  Well, let me once again repeat the focus of this piece, because I think it may have been lost, even though I mentioned it two or three times.  The piece that I was quoting here is directly aimed at Never Trumpers, and it is chastising them for not seeing the crisis that they acknowledge exists.  I mean, all these conservative intellectuals, and that’s the target, it’s this writer’s target, not mine, by the way, I’m just reading what they guy says to you and analyzing it.

His point is you’ve got all these conservatives that just can’t stomach voting for Trump because Trump is so obscene, Trump’s so barbaric, Trump’s so beneath us, and yet Trump is the only hope out there for stopping the total destruction and transformation of America as you and I understand it and want it to be.  And, therefore, he’s chastising them for acknowledging there is a crisis but not being willing to do anything about it, because voting for Hillary Clinton is just the last nail in the coffin, which many of them are claiming to do, or at least will facilitate happening if they don’t actively vote against her.

CALLER:  We need to start naming Never Trumpers’ names one by one and I’m gonna get you started right now.  Trump won the Arizona primary with almost twice as many votes as Cruz and Kasich combined.  We got a Senator out there from Arizona that’s appearing on the Sunday shows, actively and clearly stating his opposition to Trump.  We need to hold these people accountable name by name.  You can’t say the Never Trumpers like that article that you’re reading says.  It’s name by name.  We have got to hold them accountable.  And, if we do get a President Hillary and all the disasters that come with it, Senator Flake and all those other names I hope other people start naming name by name should have no —

RUSH:  Okay, look, wait a second.  I’m just playing devil’s advocate.  What good is that gonna do naming the names other than to make you feel better by calling them out?

CALLER:  Let me ask you a question.  If somebody in the Democrat Party starts speaking out against Hillary, what’s gonna happen to them?  They’re gonna be shunned.  They’re gonna be laughed at. They’re not gonna do it because they won’t get anything.  Why are we not doing the same thing here to people that are gonna end up electing President Clinton and destroy this country?  We gotta do the same thing.

RUSH:  Now, that question sort of illustrates where we are.  I mean, Trump is not perceived as the leader of the Republican Party.  They’re not gonna let that be perceived.  Trump is still an outsider to many of the Republicans, elected Republicans, he’s just, “No, no, no, he’s an oddball, he’s a quirk of fate, he’s not one of us, and, as such, there’s no loyalty demanded, there’s no loyalty required here.”

RUSH: This is Maria in Swansboro, North Carolina.  Maria, great to have you on the program.  Hi.

CALLER:  Hi.  Thank you for taking my call, Rush.  You know, I’ve been watching this whole election process taking out, and after watching the conservative establishment, the Never Trumpers and how they’re treating him and the types of things that they’re saying about his candidacy has really — I’ve kind of had a come-to-Jesus moment when it comes to these people because it’s pretty clear to me now that they will never, ever, ever fight for conservatism.  Because, if you listen to what they say about Trump and his candidacy, what are the kinds of things that they’re saying?

It’s nasty, it’s ugly, it’s dirty, it’s confrontational, it’s angry.  And these are all the things, all these qualities are the kinds of things that you actually have to engage in in order to fight for something where you’re going to get so much blowback and so much push-back.  These guys, you know, I call them the lofty perch conservatives because that’s where they are.  They’d much rather be up there where it’s safe and they can look down at the rest of us and talk and talk and talk and complain, but as soon as they have to get their feet dirty, as soon as they have to get in the mud, that’s when they turn tail and run because they just can’t stand the ugliness and the messiness of it.

And after listening to you read that article — and that’s when it hit home to me.  I said, “Oh, my God, that’s exactly what’s going on here.”  These guys — and I don’t mean to imply that they won’t fight for anything.  I know some of them have fought in wars and I appreciate what they’ve done, but it’s conservatism that they will never, ever fight for because of all of the — like remember that lady, who was the woman who complained that Trump looked angry, she was a congresswoman or I think she spoke after the State of the Union speech.

RUSH:  Dime a dozen.  I don’t remember who it might have been.

CALLER:  What is it.

CALLER:  I thought the whole thing was pretty good, but maybe you can pick out one particular thing.

RUSH:  You can’t these take issues on without getting down in the mud because that’s where everything is happening.  You can’t do this as Mr. Polite, Mr. Nonfactor, Mr. Invisible.  If you’re gonna take these things on and fight for what is being lost, it is not pretty.  No fight ever is.  And what we have, I think, are some people — you talk about people that don’t fight for conservatism.  I would disagree with you, in this sense:  If you’re talking about the Never Trumpers, I think they are fighting for what they believe is conservatism.

They think a Trump victory is going to obliterate conservatism as an ideology, and that ideology, conservatism, is where they live, it’s where they earn their living, it’s where their notoriety is and all that.  So they’re very, very intent on conservatism remaining intact.  And the complaint in this article is that they’re even willing to lose in order to maintain what they think is conservatism, and the writer’s point is, we can’t lose.  If we lose, it doesn’t matter what we are after we lose, ’cause we’re not gonna exist in any significance.  It’s that dire right now. 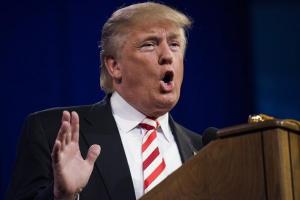 So I think you have a lot of people actually doing what they think is fighting to preserve conservatism on the basis that they think Trump’s gonna destroy it and they think, ‘We gotta stay conservative! Gotta protect it! We’ve gotta make sure it remains pure so we are here to fight another day.” And his point is, “What do you mean, ‘fight another day’?  If on the one hand you agree we’re spiraling down so fast that we don’t even have the ability to keep track of it — we’re losing the culture, we’re losing morality, we’re losing virtue, we’re losing our politics — what do you mean ‘fight another day’?  We have got to win now,” and these people are afraid that Trump is gonna destroy conservatism in the process, and that might not be good for them in whatever ways.  So I actually think you have people who, in their minds, are fighting for conservatism, in opposing Trump.

CALLER:  I think it’s kind of ironic, because Trump — because he is a fighter and because he is willing to get dirty — will actually end up manifesting more conservative policy being less conservative than these lofty perch conservatives could ever hope to implement.  So I think that they’re gonna get a lot more conservatism out of Donald Trump than they would out of, like you said, any of the other 16 candidates.

RUSH:  Well, I’ll tell you what: If you listen to that speech that Trump gave today, I think the Never Trumpers would be applauding it if somebody like Ronald Reagan gave it.  Can I tell you?  I never heard McCain or Romney spell out American foreign policy this effectively, and this is not a cut.  I’m not trying to be critical here.  It’s not my point.  But this was right on point, and it was clearly America first.

It was clearly America as the solution to the world’s problems.  It was clearly… It was conservative in much of its identification.  So you may be right about your ultimate point here that the Trump victory promotes conservatism down the road, but it’s not the kind that the Never Trumpers want it to be.  ‘Cause they don’t think Trump is a conservative, and so Trump as the face of conservatism (as they see it) is something they just can’t stomach.