RUSH: I have just been watching Trump do his speech at the Economic Club of New York, and there’s a guy sitting to his left. He’s at the podium, and there’s obviously a dais behind him, and there’s two people that you can see, and it looks like Kudlow is to Trump’s right.  That would be screen left.  And there’s another guy — I don’t know who it is — screen right, on Trump’s left. This guy would not stop chewing.  It was driving me crazy.In fact, it was so distracting and so bad, I ordered Koko to run some videotape on it so that you could see what I’m talking about. Just a little. If we could make a gif out of it, it would be a great way to do it.  The guy wouldn’t stop chewing.  I never saw him put any food in his mouth. He just kept chomping.  I said, ‘Somebody’s gotta get hold of this because this guy is distracting everybody.” Then it became funny.

Then the guy took a sip of water and still kept chewing, and I never saw a fork.  So I don’t know if he was chewing his cud or what in the world was going on.  But I felt like trying to get hold of somebody and say, “Look, you know, at the event, wherever it is, you’ve gotta get this guy. You gotta get a message to this guy to stop chewing because it’s distracting everybody.”  When you see it, you’ll see what I’m talking about.  I don’t know how much we’re gonna put up.  I don’t want to put up 10 minutes of video.

This went on for five minutes.  We’re gonna put enough of it up. I wouldn’t dare mention things like this and tease you with your inability to see it. So Koko will let me know.  Trump’s said a couple of interesting things here. It’s a good economic speech.  One of the things he said was this: “It used to be you couldn’t drink the water in Mexico and cars were built in Flint.  Now cars are made in Mexico and you can’t drink the water in Flint,” and it got a round of applause.

He also had an interesting economic stat.  I think this is a great way of illustrating differences in economic belief, policy, philosophy.  You know, we always try to tell people about the Reagan economics, the period of economics the Reagan presidency.  It’s been maligned  as supply side, trickle-down — and, of course, all economic activity is trickle-down. But the left has done their best to malign it and to say that all it was was tax cuts for the rich.

“And since the rich didn’t give their money away, since the rich weren’t sharing it, there wasn’t any trickle-down, and therefore trickle-down doesn’t work.”  It’s one of the greatest distortions in the history of ideology, the history of the news, and the history of politics.  Trump said, “Our economic growth under Barack Obama has been pathetic.  Had economic growth under Obama been as fast as it was under Reagan, we would have created 10 million jobs in the last eight years.”  Now, that’s the way to explain the difference.

If we had economic growth like we can have and like we have had — and we had economic growth specifically due to specific policies: Supply-side, trickle-down, whatever you want to call it. It was basically get the government out of everybody’s life and get the government out of everybody’s way, or as much as you can. We had job growth creation out the wazoo. Interest rates were coming down. Inflation was coming down. A bunch of things economic gurus said were not possible.

I thought that was a great way of illustrating.  Obama’s quarterly growth rate, we haven’t had anything over a point and a half.  We haven’t had any more 1.5%, 2% growth in any quarter for eight years now, or seven and a half.  So it was a great way to put it, and I was unable to gauge the response that Trump was getting.  Remember, it’s the Economic Club of New York.  But I wanted to mention those two things, plus the guy chewing there.  It ended up getting funny.

But I’m not kidding, I was getting mad, it was distracting.  You couldn’t miss the guy.  Plus, it didn’t look like he was listening to anything.  Have you ever known these people? Have you ever known these people that when they’re eating, they’re out of it? They’re not even connected. It’s like they’re totally so absorbed in it. You ask ’em something and they say, “Yeah, yeah. (eating sounds) Mmm-hmm. Mmm-hmm. (eating) Yeah, of course.” They’re just not there.  So that’s what this guy looked like. He wasn’t even listening; just kept chewing! 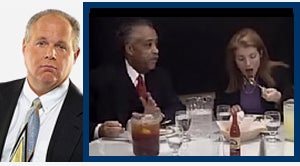 I have warned everybody: “When you’re on television, there are two things you don’t do. You don’t eat.  You do not eat on TV, particularly if you are a candidate.  Then what you don’t do, is you do not smack your lips.” They do this on purpose in television shows and movies because it does attract your attention, but you don’t do it.  Remember Caroline Kennedy?  She was running for, what, the Senate? She was gonna be the Senator before Hillary was, right, or was she…? Maybe when Hillary’s gonna quit, she was gonna become Senator.

Anyway, she’s running around meeting all the people you have to meet and then paying homage to all the people you have to pay homage to.  When it came time for Caroline Kennedy to do a sit-down with Reverend Sharpton, they went to Sylvia’s soul food in Harlem and she actually ate.  Sharpton knows enough not to.  They had a big spread on the table, and she was eating with her mouth wide open and talking at the same time.

And I said, “That’s it.  Her campaign is over.”  You just don’t do it.  You don’t eat in public. You don’t eat when the cameras are rolling, and the least of the reasons why is something might drop and stain your shirt or your clothes or what have you.  It just… Nobody looks good eating, and the only time it’s scripted is when it’s intended to be a distraction.