RUSH: We have with us, for just a few moments, the vice presidential nominee — the governor of Indiana, Mike Pence — on the phone with us. Governor, welcome, and great to have you back.

PENCE: Thank you, Rush. Good to be with you from Mason City, Iowa.

RUSH: But I want to run a couple things by you. President Obama is funding terrorism — i.e., with Iran — to the tune now maybe $33 billion, leaving our borders unprotected. We are importing unvetted refugees, and the Democrat nominee wants to increase the number. I never would have thought that to be part of the responsibilities and obligations of an American commander-in-chief. But I also never would have thought that we would have had a candidate like Mrs. Clinton endorsing all of that. This is… We have bombing attacks, we have stabbings, and immediately Donald Trump becomes the target and the blame for it. How are you all reacting to this today?

PENCE: Well, it just is extraordinary. You know, first I would just say, you know, how our hearts do go out and our prayers to those that are recovering from injuries from Minnesota to New York, and also how grateful we are to the brave first responders who moved forward. Even in Linden, New Jersey, in the last few hours apprehended a suspect in the case. So we’re… It is truly a miracle that no one lost their life this weekend over these series of terrorist attacks on our shores.

But I take your point, Rush, that it is remarkable that while Hillary Clinton and Barack Obama continue to refuse to name our enemy — which is radical Islamic terrorism — that Hillary Clinton used a press conference today to attack my running mate, Donald Trump, saying that in fact his rhetoric was, quote, “giving comfort to our adversaries,” in her words. Well, the only thing that gives comfort to our adversaries is weakness. The only thing that will alarm or put fear in the hearts of our adversaries is the absolute assurance that we will have an American president who will rebuild our military, marshal our resources, rebuild our alliances, and confront and hunt down and destroy those who would bring violence to our citizens or inspire violence here at home.

RUSH: You know, it’s incredible. We have the Benghazi attack, for example, which was clearly a planned terrorism attack, and what do they do? Blame some hapless guy who made a video that nobody’d ever seen. Now we have these events here — and San Bernardino, previous events like this — and these same people, every one of these perpetrators ends up a victim somehow in their world. Well, they’re justified. They’re discriminated against as Muslims in this horribly racist country. “We have got to empathize with them,” Hillary once said. That’s “smart power.” Mr. Vice Presidential Nominee, they don’t seem to be doing anything. They don’t seem to be oriented toward solving any of this. None of the actions they want to take or say they’re gonna take will do anything other than perpetuate this.

PENCE: Well, I’m not sure that Hillary Clinton and Barack Obama know that we’re at war. The White House spokesman today actually said that we were in a quote, “narrative fight,” in a “narrative battle.”

PENCE: I don’t even know what that is! To be honest with you, I was just mystified by it. I know that we’ve got American military personnel in the region, in Iraq, fighting ISIS, on the ground in Syria. I mean, we’re at war with the ISIS caliphate that sprang up because Hillary Clinton and Barack Obama precipitously withdrew all American forces from Iraq and created a vacuum of power, that ISIS was able to overrun vast territories that our soldiers had won in Operation Iraqi Freedom. And yet from the beginning all the way through yesterday, Hillary Clinton and her running mate… I mean, the president in January 2014 called ISIS “the JV team” and yesterday, Hillary Clinton’s running mate, Senator Tim Kaine, said we had, quote, “dramatically improved” in the battle against ISIS in the last year. That was the morning after a soldier of the Islamic State stabbed nine Americans in Minnesota in a mall. It just strikes me that the American people see through all this. 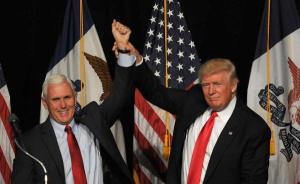 PENCE: I’ll take your interpretation of it, Rush. I really don’t understand what a “narrative fight” or a “narrative battle” is. I mean, we need new leadership in this country that will name our enemy. Donald Trump laid out that brilliant speech in Youngstown, Ohio, to confront —

PENCE: — and defeat radical Islamic terrorism by rebuilding our military, renewing our alliances — including with moderated Arab nations — hunting down and destroying ISIS, and also setting aside this cultural of political correctness that is tying the hands of law enforcement here at home. We’ve got a law enforcement officer who was shot today in New Jersey taking down this terrorist suspect, and he’s in our hearts and in our prayers as we speak. But the truth is that this culture of political correctness has tied the hands of law enforcement around this country.

Who are constantly walking on eggshells and not wanting to give offense to anyone, and all the while we see these terrorists in our midst. I think Donald Trump knows the kind of leadership that we need at home and abroad. I think the reason why you see this campaign developing such tremendous momentum is the American people know that we need — America needs — to be strong for the world to be safe and for the American people to be safe, and that will happen when Donald Trump becomes president of the United States.

RUSH: You have a lot of people who really are angry over Trump being blamed for this by Hillary. I’ve had a couple calls today from people with their own ideas about how you ought to respond to this. There is a palpable thirst on the part of many of your supporters for you guys just to launch back at Hillary and Obama when they try to blame you for this. What is the strategy that you have dealing with this? Because you know that the media is on their side, and if they say, “Trump did this! Trump is responsible for it with his rhetoric,” they’re going to carry that ball. How do you guys plan to react to it if at all?

PENCE: Well, I’m gonna be doing a series of events in Iowa here today. Donald Trump is traveling to Florida later today. Look, we recognize weakness arouses evil. The American people know this, and we’re gonna call ’em out. Seven-and-a-half years of the weak and feckless foreign policy of Hillary Clinton and Barack Obama has weakened America’s place in the world and it has emboldened the enemies of our freedom. Our enemies will respond only to American strength. But I want to tell you, I’m gonna, at our events here in Iowa and going forward…

I just think that the fact that Hillary Clinton today said that my running mate’s rhetoric is, quote, being “seized on by terrorists, in particular ISIS, because they’re looking to make this into a war against Islam.” To me, once again, this is “ready, fire, aim” by the Democrats. They just simply… They don’t know that this is not a “narrative fight,” this is not a “narrative battle.” We are at war with radical Islamic terrorism. We are at war with the ISIS caliphate, and what we need is a commander-in-chief who knows that, who understands that, who will give our military the resources they need to make that fight, pull our allies together — including moderate Arab nations — and hunt down and destroy ISIS and other terrorist organizations at their source.

RUSH: Well, Governor, thanks very much. We’ve reached the time that you have to go. You have a hard out today ’cause your schedule is so busy. Thank you for being able to squeeze us in today.

PENCE: Thank you, Rush. It’s an honor to be with you.

RUSH: Governor, Mike Pence, Indiana, who is the, of course, vice presidential nominee.