It Wasn’t Supposed to Be This Way

RUSH: Here’s another story.  This is actually a column, I guess, by Chris Stirewalt, the political director at Fox News.  And he starts his piece today… How many times…? How many times have I said to you — in fact, even on today’s broadcast when talking about Hillary and her campaign — it wasn’t supposed to be this way? They were supposed to have this wrapped up.

Never, ever think it’s over until it is.

Never, ever cop an arrogant attitude, because it’s always likely to come back and bite you.  And this is Stirewalt in his piece today has… Let me give you two pull quotes from it.  “The possibility…” He has to write this stuff.  I mean, this is Journalism 101. You have your premise and then you allow that you could be wrong.  “The possibility still exists for the kind of election that Clinton expected.  But with five days until the first debate, that’s not how it’s shaping up.

“She’s not gonna have to campaign every day to beat this guy, ’cause this guy is gonna defeat himself.  This guy’s gonna implode. He may not even be in the race by the time we get to Election Day.”  So they were probably breathing a huge sigh of relief, and with every one of these episodes — and I’m gonna tell you something, folks. The media is down playing this — as they, of course, would.  How many of you…? Let me just ask you this: How many of you are old enough to have remembered or have seen it perhaps replayed that moment when John Hinckley attempted to assassinate Ronaldus Magnus?

There was chaos, and they hustled him into the limousine. I mean, they literally shoved him in the limousine, the Secret Service did, and that limousine took out of there at full speed. You remember the…? If you were around then, it would be the early eighties when you saw this. That’s a powerful image; your president just got shot, and you have no idea.  And the first reports were that it wasn’t serious, that the shot may have even missed the president, that James Brady took the brunt of it. 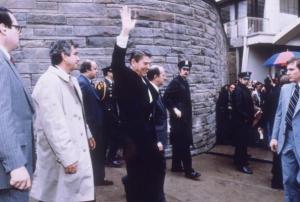 People who have seen that — and that thing has been recycled and replayed on YouTube gazillions of times.  And this is one of these things… The Drive-Bys, they’re not sure about  playing that video. They’re fooling themselves into believing, “There’s no impact in that! We’re not playing that video. Nobody really saw that.  Besides, we’ve explained it.  She just lost a shoe!  She was fine an hour and a half later.  It was no big deal.” But it was and remains so.  The person is running for president.

Forget who it is.  Anybody in that video, that’s a two- or three-gulper when you see that, and you don’t forget it.  And then every day following when Mrs. Clinton can’t make a campaign appearance? She canceled a campaign appearance yesterday.  And now the Clinton campaign says, “Well, yes, she’s resting up for the debates.”  Well, the debates are what, 10 days, five days away? I forget.  It’s at least a number of days.  I mean, you don’t rest that long for a single event.  But she is.  She has to.

Then there was another video yesterday.  And I didn’t put much stock in this at first, but then last night I looking at it a little bit. Have you seen this one, Mr. Snerdley? Mr. Snerdley just got back from a very important conference.  Hillary was speaking someplace, I forget where, but her eyes appeared to be darting independent of coordination.  It’s the strangest… You might not even notice it unless you’re told to look for it, and then after you’re told to look for it, you can’t miss it.

The left eye and the right eye are going in different directions at the same time a couple or three times, and the eyes are darting left and right while the head is not.  And then you start remembering, “Yeah, I remember the other episode where all of the she’s talking to reporters and she starts nodding her head up and down uh-uh-uh and laughing and so forth.” They said, “She was just telling a joke!” Oh, okay. So you promptly forget.

But when you see all these things, all these other things come to mind again. You remember what you’ve seen.  My point here is, they are worried about all of this.  This stuff has a cumulative effect.  And Mrs. Clinton is not running a campaign that looks like somebody filled with energy and desire and really, really wants this.  This is looking more and more like somebody who feels entitled like it is a coronation, like it’s expected and doesn’t really have to do that much for it.  Or it looks like somebody who’s just not up to it.

Yeah, that picture of her on the plane where she… I could not believe that her handlers allowed her to walk to the back of the airplane looking like that.  The same thing as I couldn’t believe her handlers allowed her to continue that four-minute coughing spasm without… You know, Tim Kaine should have stood up there and grabbed the microphone and taken over; been a little chivalrous instead of standing there clapping and laughing like she’s cracking jokes.  Yeah, they sent her back to talk to the little press gaggle there on Hillary Force One, Hildebeast One, and I forget even what she was talking about.

She tried to look somber and everything, but, man, it didn’t work.  So, “Rather than contemplating her cabinet, Clinton is instead working desperately to prevent panic in Democratic quarters as weeks of poor performance leave her with only a whisker of a lead in the national contest and trailing in some key states.” Remember where this was supposed to be a blowout.  There was supposed to be an obliteration of Donald Trump. I’m glad other people are catching up on this.  This is not how it was supposed to be.  And it just means that there’s panic out there in the Democrat sectors.  And you’re not gonna see it.  You just have to know it.

RUSH:  Look, lest anybody misunderstand in the heat of battle and the pitch of emotion, when I sit here and chronicle the at-the-moment problems of Hillary and her campaign, I don’t want anybody thinking I think this is over by any stretch.  I don’t.  I have no idea what’s gonna happen here, and I don’t think the pollsters do, either.  And the polling, as we’ve demonstrated, can be interpreted in any number of ways.

All we know is for certain that this is not the way the Democrats thought this was gonna go.  It’s not anywhere near where they thought Hillary was gonna be, and all these other negatives that were attaching to Hillary are things that were unexpected and maybe not accounted for or planned for.

I don’t want anybody to infer from what I’m saying here that I’m predicting a Hillary loss and Trump win.  I’m not at the point of doing that on either side here.  But I have a sound bite coming up, you’re gonna hear it.  Well here, let’s just play it.  I got time to squeeze it in.  This is another thing they didn’t have to plan on.  This is Wolf Blitzer’s show this afternoon.  He’s talking with Washington Post reporter Abby Phillip about the African-American vote and how it’s not energized behind Hillary and, oh, no, what are they going to do? The turnout in general is gonna be important and how are they going to fix this for Hillary?

PHILLIP:  When I talk to people who are close to the White House, they say the president and the first lady are pretty sure at this point that they’re gonna have to take this on themselves. They’re be gonna have to be out there in Philadelphia and in the suburbs and in North Carolina and in other places where she really needs African-American turnout to be close to the levels that he had them at in 2012 in order to compensate for what is likely to be a loss among white voters going into this election.  So the president, we saw that from him in the last week.  He is really fired up about this because he knows that his entire legacy is on Hillary Clinton’s shoulders right now.

RUSH:  Right.  Now, stop and think of that.  That cannot be a comforting thing.  If you’re Barack Hussein O and you’re sitting there with your wife telling you what-for about your legacy, and you realize it’s on Hillary Clinton’s shoulders, you’re not going to leave it at that.  So this is a Washington Post reporter saying, look, the Obamas know that in order to save their legacy, they’re gonna have to go out and get the black vote for Hillary ’cause she can’t do it.  I don’t think this was part of the original plan, if you ask me, but Obama will be happy to do it.  He loves to go out on the campaign trail and make it all about him.  Just saying.