RUSH: We now have some people that are on hold and on the phones and have been cleared to appear on the program.  We’re gonna start with Tom who is in Charlotte.  I’m glad you made it through today, Tom.  How are you doing?

CALLER:  Oh, Rush, I can’t tell you how glad I am I made it through, too.  This is amazing.  Talking to you is just amazing.  So I just needed — your listeners have got to hear what happened here in Charlotte yesterday.  City officials in the afternoon sent out an email to all the city employees, and I think it was on the local news, too. They basically announced that there was gonna be a scheduled protest at Marshall Park at seven p.m. and that they expected it to become violent.  And then they basically ordered everybody to go home, not just city employees, but like all the banks sent out mass emails to everybody and said, “Everybody go home at four o’clock.”

CALLER:  And set the stage for all this to happen.

RUSH:  What they ended up doing was clearing a path for these people.  Look at all the hotels and the businesses that likely will now suffer because of this.  You add to whatever damage that bathroom law has done and the NBA piling on, and what did you guys do to deserve any of this?

CALLER:  Well, we’re just the next stop in the Obama world tour, Rush.  I mean, this is the same stage show that they put on in Baltimore.

RUSH:  Charlotte is the next city which must suffer in order to generate African-American turnout in November for Hillary.

CALLER:  Well, I mean, I think that maybe it’s just a way to divide the country.  I mean, yeah, I agree, you’re right, they’re trying to get the voters to turn out.

CALLER:  They bring in the national media. They let the national media come in and cover this.  They set the stage for violence.  Now they just sit back and wait.  They film it when it happens, they put it on the national media, and then they stir it up and say, “Look, look, we got a race war going on. Everybody’s gotta get out there.”

RUSH:  No, no, you’re right, but I tell you, the national media is not all there yet.  There are planeloads of Drive-By Media en route even now.  I know flight attendants all over the country.  I’m getting private notes about all the Drive-Bys on the planes.

RUSH: John in Indianapolis.  We’ll squeeze a call in in our remaining moments of this busy broadcast segment.  How you doing, John?

CALLER:  I’m doing fantastic.  Hey, right off the bat, I’d just like to tell you that Trump had my vote when he caused Lindsey Graham to get his golf club out and destroy his own cell phone.  Thank you very much.

RUSH:  You’re welcome, my friend.  I remember that.  Yes.

CALLER:  Anyway, I think the Democrats and Hillary needed Charlotte, because it’s like, 2016, famously said, “Never let a crisis go to waste.”

CALLER:  If you notice, the Jersey bombing, the thing that happened in Minnesota, the thing of cargo jets full of cash and Iran, Hillary’s health, Hillary’s emails have all gone away.  And I think the optics of Hillary on 9/11, that was over.  I think it’s a done deal.

RUSH:  Okay, now, wait.  Wait, wait.  I hear all this.  And I’m gonna admit something.  I take a little of it personally.  You don’t mean it that way.  But I have people… The reason I do is ’cause I have people who email me accusing me of falling for the latest Democrat trick, of getting soaked up into this story and not covering the email scandal, not covering her illness.

“You’re falling for it, too, Rush.” I say, “I’m not falling for anything here!  Whatever they do, there’s an opportunity to explain it.”  But let me ask you this.  If you think this was largely engineered to distract people from Hillary’s illnesses and the Iranian payoff and all these other things you mentioned, what started this?  Remember, there was a shooting in Charlotte.  A cop shot somebody.  Was that part of the plan, too?

CALLER:  Well, they could have picked any other story nationally.  But, you know, we’ve already experienced Baltimore and Ferguson.  And I think if the TV people pack up their cameras and load up their trucks and skedaddle out of there, you know, it’s all gonna go away after the debates on Monday.  Charlotte will be forgotten.  Don’t you think?

RUSH:  Oh, yeah.  Well, forgotten in the sense that it’s no longer a front page or lead item on cable news, yeah.  But it’s not gonna be forgotten as a reference point.  It’s gonna join a long list of supposed examples of how racist and discriminatory and mean America and the cops are.  But, my only point is, look, I understand people think that this whole thing is a gigantic distraction so that Hillary’s emails and her health problems are swept away and nobody’s talking about them anymore.  Some people even go so far as saying, yeah, this is a conspiracy. 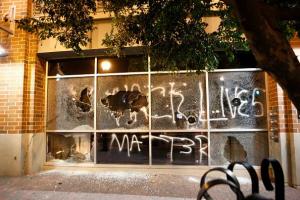 What you’re really saying is, this happened and they’re fully willing to take advantage of it because it’s a crisis that they’re not gonna let go to waste.  I understand your standpoint, or your point of view on this.

RUSH: This is Linda in Atlanta as we stay on the phones.  Greetings, and welcome to the program.  Hi.

CALLER:  Good.  Good.  First of all, I just want to give you a big thank-you for everything from your radio show to your books and all that you do to educate and inform the public. It’s tremendously important and you keep us up-to-date on everything and your opinions and I want to thank you for that.

RUSH:  Thank you.  I appreciate that very, very much.

CALLER:  Okay.  Protests are nothing new, okay?  They’ve been going on since the beginning of time.  We read about ’em in the Bible and everything moving forward.  And protests, just like anything, have rules.  And what I can’t really figure out is why people don’t follow the rules.  When the police say, “Put your hands in the air,” when the police say “do not get into your car,” when the police say, “Stay still, get down, be quiet,” whatever they say — I’ve had a pet care business for 16 years and I train animals.  It’s probably easier sometimes to train an animal that it is a human being, but when it comes to life, when it comes to a bullet, when it comes to anyone losing their family, their environment, their jobs, losing everything — 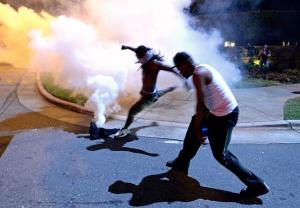 There are procedures that are taught in police academies.  Everything is rooted around safety for everybody involved.  And if the cops tell you walk away, put your hands up or put your hands behind your head, get down on your knees, the vast majority of people have respect for this kind of authority and will abide by it.

But Linda, the answer to your question is, in many neighborhoods, in many parts of this country people do not trust the cops and do not want to give an inch.  It is an automatic confrontational, adversarial relationship.  Whenever a cop himself in any aspect — could be a traffic stop, could be an accident, anything — when a cop’s involved, some people instinctively, because of either the way they’ve been raised or their life experiences, it becomes adversarial, and it becomes a game of stare-down and you have people who will refuse to give an inch.

They will refuse to be put on the defensive, by a cop especially. It’s manly to stand up to the cop.  It’s manly to call the cop a name.  A lot of it is cultural.  The answers to this question are deep and the solutions to it are even deeper than that.  But that’s the surface answer for you.  And I would delve deeper.  Clearly capable, but I’m out of time.