RUSH: A story from yesterday I didn’t have a chance to get to.  Sunday at the Men’s Day program hosted at Union Temple Baptist church in Washington, DC, the Nation of Islam grand pooh-bah, Minister Louis Farrakhan, said to President Obama, “Your people are suffering and dying in the streets of Chicago, so you failed to do what should have been done.”  Farrakhan continued by saying it’s time to let Donald Trump do what he wants to, because he’s not destroying your legacy.

“To show you how hateful the enemy is, he hates that you achieve what you did achieve. So he said I’m going to tear it up when I get in. So he don’t want his legacy destroyed. Mr. President, let the man do, if he get in, what he wants to because he is not destroying your legacy. If your legacy is bound up in an Affordable Care Act that only effects a few million people and they are trying to make it really difficult for those of us who signed up, that’s not your legacy.

The Legacy of President Obama with Black people

Minister Farrakhan to President Barack Obama: "You didn’t earn your legacy with Black people. You fought for the rights of gay people. You fight for Israel. Your people are suffering and dying in the streets!"

“But I just want to tell you, Mr. President, you’re  from Chicago and so am I. I go out in the streets with the people. I visited the worst neighborhoods. I talked to the gangs. And while I was out there talking to them they said ‘You know, Farrakhan, the president ain’t never come. Could you get him to come and look after us?’  There’s your legacy, Mr. President, it’s in the streets with your suffering people, Mr. President. And If you can’t go and see about them, then don’t worry about your legacy.”

So Calypso Louie just unloaded to Obama on Sunday, essentially charging his priorities are all out of whack.  What legacy?  You ain’t gonna have no legacy if all you think it is, is health care.  Your people are dying.  Your people are getting killed.  You don’t care.  And then Douglas Wilder of the noted Wilder Effect, the former governor of Virginia, has come out and trashed Hillary, claiming she takes the black vote for granted.

RUSH:  Okay.  So Calypso Louie goes after Obama for essentially abandoning the African-American community in favor of his legacy.  And, by the way, folks, this gets to exactly the point that I have been making the past two days.  We have riots now, the expected the norm, the new norm in the second term of the first presidency of an African-American. We have the first African-American president, and what’s the legacy?  What’s the expected norm?  Riots.  When law enforcement uses its weapons, bam! Automatic.

Everybody just assumes we’re gonna have riots.  Doesn’t matter why. Doesn’t matter the specifics.  The facts in each instance don’t matter.  It’s a license to riot, sanctioned by the highest levels of our government because they make no effort to stop it, as evidenced by Loretta Lynch’s most recent press conference.  As I say earlier, if I were African-American, and living in an inner city or part of an inner city like Charlotte or wherever, I’d be mad, too, folks.  So would you.  Their anger just misdirected.

But remember, the leaders of this movement are not really the same people who live in these inner city neighborhoods.  They are purely, 100% political.  This is not about “living conditions.”  It’s not about any of these things they bellyache about.  This is about advancing liberalism, globalism.  This is about transforming the United States away from what it was founded to be.  This is about defeating Republicans and conservatives, disguised as an effort to ratchet up the quality of black lives.

The whole thing is misdirection, and the proof of that in this case is there’s not a white cop anywhere involved in any of this, and it doesn’t matter.  Farrakhan, he sees what’s going on.  “Hey, man, your people in Chicago, your people in Charlotte, they’re dying to the streets you’re not doing a damn thing about it! You are worried about your legacy on health care, and you go out and make a speech and you beg us to show up and vote for Hillary for your legacy?”

I hate to say it, but that’s a common-sensical reaction to what Obama’s doing.  The fact that it comes from Calypso Louie doesn’t disqualify it as far as I’m concerned.  It’s a very common-sense reaction.  I mean, I would think… You know, I’m not African-American. I’m not suggesting that I am in any way, shape, manner, or form. But I think about this. If I’m African-American, there’s Obama up there begging me to go out and vote for him and to save him and his legacy and help Hillary?

“We’re in the second term of the Obama administration, and economic circumstances for African-Americans — in real income, median income, wage increases, unemployment — it’s a disaster.”  And over here Donald Trump’s the one guy running around trying to literally make unification inroads with black leaders and black churches.  “The first elected black governor, Douglas Wilder,” this is from TheHill.com (summarized), “says that Hillary Clinton assumes she has unwavering support from African-Americans, and it isn’t true.”

So Farrakhan trashes Obama yesterday and Wilder trashes Hillary today.  He said, Doug Wilder… “‘For her to go out and say to the African-American community, “I want you to elect me so that we can continue the legacy of Barack Obama,” what exactly is it that you want to continue?’ former Democratic Virginia Gov. Douglas Wilder asked in a Washington Post interview Thursday.  ‘You cannot win this election without the African-American vote,’ added Wilder. 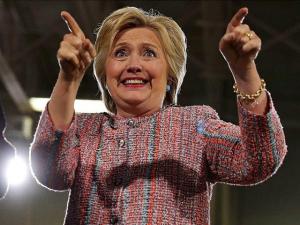 And Wilder is saying (paraphrased), “You really think that African-Americans all over this country care about Obama’s legacy, that the most important thing to them is the historical legacy of the first African-American president?”  Well, let me tell you something. (chuckles) That’s exactly how they do think.  Hillary specifically thinks that the black vote is automatic, or the Democrat, 92, 93% every presidential year, and I’m telling you this, too, folks — and don’t doubt me.  It’s gonna be hard, but don’t doubt me.

The Democrats consider the African-American vote automatic. They, I am convinced, really do believe that the African-American vote is focused on the preservation of Democrat leaders.  I think they’re that far gone.  I think they really think there is hero worship in all these constituency groups, and they vote for the Democrat to help the Democrat, and the voters are looking at it the other way around.  They’re voting for people thinking and hoping there’s gonna be something come back to ’em, and that doesn’t happen.

See, 50 years. That’s why I’ve been asking, “What have you gotten for all this?”  Nothing.  And that’s what… Trump’s been making the same point.  “What do you have to lose voting for me?  I don’t see it working all that great for you right now,” and then you can tell by the catcall reactions of Democrats and media people what a home run that comment is ’cause they act like stuck pigs squealing around.  So it’s not hunky-dory out there, and there’s resentment seeping in, and the Black Lives Matter protests and all this sort of stuff?

What it’s really about, from the leadership level — not the people in the streets doing the rioting and the burning, but the people promoting that and encouraging that, the leaders of it. The strictly partisan political operatives are being funded by partisan political donors like George Soros for the express purpose of advancing the Democrat Party, all the while making it look like the people joining the riots, all of this is ultimately gonna benefit them.  It’s not about them.  They’re just made to think that it is.