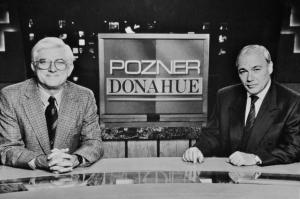 DONAHUE:  Nothing bothers the press more than bad press, like Matt Lauer got.  A lot of pompous press went around saying, “Wasn’t it awful, wasn’t it awful,” and they really hit hard, I think harder than is necessary, a little bit self-righteously.  I’m saying let’s relax a little bit and I feel for Lester Holt.  I think now he feels obliged to push back.  And the result is gonna be verbal arm wrestling.  I think if you just let ’em go, their real souls will manifest, will become more clear, and if they’re bawdy and disrespectful and pushy, they will fall of their own weight.  Let’s just trust the audience for once.

So then Donahue expanded on what he said, “Just let ’em be themselves, because the people will figure it out.” And, by the way, when he says, “If they’re bawdy and disrespectful and pushy,” who do you think he’s talking about?  He’s talking about Trump. If Trump is gonna act like Trump, let Trump act like Trump. People will figure it out.  I would associate bawdy and disrespectful and pushy with Nurse Ratched.  Anyway, here’s how Donahue wrapped it up.

DONAHUE:  Media’s played a more central role in this election than any of the past elections, although it certainly was important in past elections.  You know, Donald Trump is like a guy in a top hat who just jumped out of the cake and hurray for Hollywood, and we’re attracted to that.  If I had a show I’d put him on.  The coin of the realm is the size of the audience.  And he draws an audience.  There’s just no doubt about it.  I don’t have to tell you.  If nobody’s watching, we’re all gonna be parking cars, and he ensures a bigger audience.

RUSH:  Phil, he’s been using that line since the first time I ever saw his show. If nobody’s watching, we’re gonna be parking cars.  But Trump is great TV.  He knows.  And he said so.