If Nurse Ratched Sounds Shrill to You, Then You’re a Sexist Pig

RUSH: Now, since Mrs. Clinton is a woman, the female Drive-Bys have decided that it’s necessary here to prepublicize these debates and precharacterize the ways Mrs. Clinton will be treated that demonstrate sexism.  Lesley Stahl of CBS 60 Minutes decided to delve into this.  She was guest hosting Charlie Rose on PBS last night, and she had as her guest a professor of linguistics from Georgetown University by the name of Deborah Tannen.  I know who this Deborah Tannen is.  I haven’t seen this, but if I saw her, I would recognize her.  She’s a well-known PBS guest.  Linguistics professor.  And so, Lesley Stahl, we’ve got two sound bites.  Here’s the first one.  The question is contained on the bite.

TANNEN:  The one we hear all the time is, “Why does she yell?” And I have heard people say, “This has nothing but sexism, I just wish she’d stop yelling.”  Well, if you listen to any public speaker who is addressing a crowd of thousands who are yelling back, they have to raise their voices, they have to yell, and all candidates yell because they’re talking over a crowd.  But it doesn’t sit right when it’s a woman.  The worst thing for women is we’re expected to be emotional, but the emotion must not be anger.

RUSH:  Just doesn’t sit right when it’s a woman.  A woman just can’t yell.  It’s just so unfair. These crowds are big and you have to yell over them to hear.  All the candidates yell, it just doesn’t sit right with a woman, it’s the worst thing for a woman. We’re expected to be emotional, but emotion can’t be anger.

So you see what they’re doing.  They’re setting it up so that when Hillary becomes the shrill Nurse Ratched she is, you’re not supposed to think it’s anything other than sexism because Hillary has to yell ’cause women have to yell to be heard over the noise and the racket created by men in the audience.  All these candidates yell, but only when Hillary yells do they talk about it and call it out and make it sound like it’s shrill.

Trump doesn’t yell. I’ve never heard Trump yell.  Hillary doesn’t yell.  She says, “I ain’t no ways tired,” and then she goes on these shouting sprees.  But you see what they’re doing.  She can’t help but yell.  It’s her natural predisposition, and when it happens we’re now supposed think it’s sexism if you think so.  If you think you’re hearing her yell and be shrill, you’re being sexist.  So Lesley Stahl then continues this line of commentary.

RUSH:  When was the last time you heard the world shrill applied to a man.  So here we have Lesley Stahl and this Deborah Tannen, linguistics professor, you see they’ve got chips on their shoulder. It just can’t be fair, it can’t be fair, because Hillary, she’s gonna sound like your mom.  No, it’s like your ex-wife.  Could you people get this straight?  People do not hear their mother when Hillary Clinton starts talking, believe me on this.  Let’s review, shall we, let’s go back to the Grooveyard of Forgotten Sound Bites.  This is a video conference with the Laborers’ International Union of North America, and Mrs. Clinton. It’s just three seconds, but here you go.

HILLARY:  Why aren’t I 50 points ahead, you might ask.

RUSH:  Why aren’t I 50 points ahead, you might ask.  There was no audience that was shouting there.  She’s on video.  Nobody’s making any noise, and even if they had been, he couldn’t hear them, it’s a one way video feed.  She wasn’t even in the room.  April 18th, 2003, Hartford, Connecticut, the annual Jefferson-Jackson-Bailey dinner.  This is when Hillary was a Senator.

Remember Nigel Farage, the Brexit guy?  He was on Lou Dobbs last night, Fox Business Network.  And Lou Dobbs said, “Your mind has to wander a bit at what you’re witnessing across the pond,” meaning watching the presidential campaign here in this country.

FARAGE:  What I’m witnessing across the pond is exactly what I saw here during the Brexit referendum.  I see what’s happening in the States very much as a mirror reflection of the kind of thing that happened here a few months ago.  It’s perfectly clear to me his campaign has got momentum.  He’s got the big M now going with him, and you will get dire predictions that awful things will happen to ordinary Americans if Trump becomes president and I would just say to people, “Don’t listen to the so-called experts.  Look at the two candidates that you’ve got in this election and ask yourself a question.  Do you want things to say exactly as they are, or do you want change?”

RUSH:  Well, they’re not gonna stay exactly as they are, they’re gonna get worse.  We’re gonna get more of the same, which is destructive.  These last eight years have been destructive and it’s gonna continue if she wins.  But listen to what the guy says about Hillary.  Lou Dobbs says to Nigel Farage, “You caught Mrs. Clinton’s attention when Trump introduced you.  I haven’t heard your assessment of her as a candidate.”

FARAGE:  I was always told that it was a very good thing in life to be judged by your enemies.  And if Mrs. Clinton is now my avowed, sworn enemy, I must be getting something right.  Look, she represents so much that has gone wrong over the course of the last couple of decades.  She represents the kind of privileged elites that pretends at election time that it represents ordinary folk and their aspirations, but actually is about self.  So I think that Hillary Clinton is a truly awful candidate.  Frankly, I think the worst I’ve ever seen.  And if she were to win, all the same bad old things would just continue.

RUSH:  That’s not pulling any punches, calling her an awful candidate.  You know, folks, in one sense, she is.  She can’t last long on the campaign trail.  The more she’s out there, the more unlikable she becomes, and the greater her poll numbers decline.  The longer she’s out there, the greater the risk she’s gonna have a medical episode.  When she is out there and the things she says and does, they’re not lighting anything up. 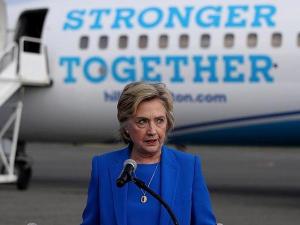 In their minds, this campaign is not relevant.  She’s gonna win no matter what.  So having to do any of it is just a pain in the royal butt is her attitude about it.  As such, she comes across as uninterested and even above all of this.  She’s not a good candidate, no matter how you slice it.  She doesn’t engender excitement.  She doesn’t have anything infectious about her.  There’s nothing about Hillary Clinton that makes you want to join her, that makes you want to join whatever she’s doing.  There’s nothing she makes you want to be part of what she’s doing unless you are a donor who wants a payback for all the money you’re giving.

But I’m talking strict human emotional terms, there’s no magnetism, there’s no charisma.  And she’s an awful candidate because she resents even having to do it.  Don’t doubt me on this.  If that doesn’t appear obvious to you — and it may not.  It’s just you haven’t studied these people as I have for all of these years.  When they talk about a coronation, they’re only half laughing about it, and it was supposed to be that back in 2008.

RUSH:  I take it back.  Trump did yell in his acceptance speech at the Republican National Convention.  Did you think it was shrill when Trump yelled at the Republican National Convention?  I didn’t associate it with the kind of yelling Hillary yells.  But he did yell.  I mean, I can’t deny, he raised his voice, and he was being emphatic.  There’s no question about it.