RUSH: It’s Open Line Friday.  I know what you want to talk about, but I just want to remind you that since it is Friday, you can talk about anything.  It doesn’t have to be about race riots, conflict resolution — by the way, speaking of the race riots, have you noticed there aren’t any race riots, riots period, in Oklahoma?  In Oklahoma you actually had a white female cop shoot an African-American perpetrator, and there’s literally nothing.

In North Carolina, in Charlotte — by the way, the game will go on, the Charlotte Panthers are gonna host the Minnesota Vikings. Or, as Brent Musburger used say, the “Via-kings,” the Minnesota Via-kings.  Anyway, the game’s gonna go on.  In Charlotte, where you had an African-American cop, who, you look at this guy’s resume, this guy’s awesome, by the way. And you had an African-American perp, and immediately the Nation of Islam guy comes out and says, “We need to boycott all white businesses and all white stores.”  Wait a minute, no whites involved here, and yet two nights of terror and one night of peace and calm.

But nothing in Oklahoma, nothing, where there actually is a racial component to what happened.  Now, the cop has been charged, what, manslaughter?  Yeah, first degree manslaughter, but in past incidents that hasn’t appeased anybody.  So Mr. Snerdley, pop quiz.  Why are the civil rights crowds and the Black Lives Matter groups and the people loyal to the Reverend Jackson, why aren’t they in Oklahoma?  Why aren’t they raising hell in Oklahoma and why are they raising hell in North Carolina, where there isn’t a racial component?

Right.  Exactly right.  Oklahoma is gone.  Oklahoma is in the Trump camp.  There’s no reason to spend any time or money there.  North Carolina, Hillary’s in trouble, they need the black turnout, proving all of this is — you know, I’m gonna tell you something.  I’m gonna be accused of insensitivity.  From the moment this started, I felt a lot of it was — well, I know it’s ginned up because there isn’t a racial component here. 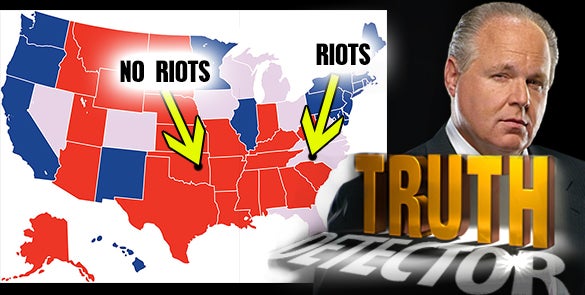 I mean, Black Lives Matter and civil rights coalition, if you don’t think this is political, then you’ve got to learn how to see these things because everything the Democrat Party and the left are involved in becomes politicized and thus becomes corrupted.

RUSH:  Yeah, yeah, yeah, I saw that, what is it, 70% of the people arrested last night North Carolina are from out of state, just like Ferguson, just like Baltimore, 70% out of state.  Remember, in Tulsa we had a white female cop shoot a black suspect, now being charged with first-degree manslaughter, and there’s not a single Black Lives Matter protest that’s gone on in Tulsa.  Not one.

In Charlotte we had a black cop shoot a black suspect, circumstances are still cloudy.  And Black Lives Matter, they’re all over North Carolina.  There’s not even a racial component.  And yet three nights of protest, two of them pretty raucous, curfews, fires, looting, all of this stuff, why nothing in Oklahoma?  If this doesn’t prove to you that all of this is political.  It’s about the African-American turnout in North Carolina.  Oklahoma’s gone.  It’s in the Trump camp.  They vote Republican; there’s no hope.  North Carolina still up for grabs.  Seventy percent of the people arrested from out of state in Charlotte, North Carolina.

CALLER:  Hi, Rush.  I wanted to make a couple of points.  The first one about the debate.  I agree with your previous caller.  I don’t think Hillary’s gonna fall down, but if she has a coughing attack, I don’t think that Trump should really do anything except maybe ask the moderator if someone can assist her.

RUSH:  Okay.  He should not offer personal assistance at all, you don’t think?

CALLER:  I do not think he should do that.  Can I go to my second point?

CALLER:  It’s about all the rioting.  You know, I just wish that this administration would give law enforcement as much leeway as they give the Islamic terrorists.

RUSH:  (laughing)  Exactly right!  You know, they do.  They look the other way. They tell us we need to understand the rage and understand this or that and the other thing.  It’s a good point.  Since you bring that up, I got a sound bite from Obama here that may illustrate what you’re talking about.  Grab sound bite number one.  We’re up to Robin Roberts, Good Morning America, and she is interviewing Obama, interview taped at the new Smithsonian Museum of African American History and Culture.

She said, “What we’ve seen recently in Charlotte, young people rising up, showing their frustration in a different way –” she doesn’t tell him that 70% of them are bused in from out of town, therefore paid to show up.  She doesn’t tell him. He probably knows. He’s probably behind the whole movement to bus ’em in.  It’s what a community organizer does.  You don’t leave things to chance.  If you’re gonna plan a riot, there damn well better be a riot and you better make sure there are rioters there. And if you gotta bus them in from out of town, you do it.  So she says to him, “When you and the rest of the world see what’s going on in Charlotte, what goes through your mind?”

RUSH:  It didn’t sound very impassioned to me.  It doesn’t sound like he’s that interested to me when you get right down to it. (imitating Obama) “I hope they come together. There’s right ways, there’s wrong ways.  There’s perversion, there’s not perversion. There’s pervasiveness, there’s not pervasiveness and it all boils down to how you separate it out.  Yeah, I hope they come together.”  Really?  That’s it?  You want to hear him get animated?  She says, “You said it would benefit Trump to come here to this new African-American museum.  Why do you think that?”

OBAMA:  This was in response to an assertion that he then repeated after my remarks, that this is the worst time ever to be black.  I think even most eight-year-olds will tell you that whole slavery wasn’t very good for black people.  Jim Crow wasn’t very good for black people.  What we have to do is use our history to propel us to make even more progress in the future.

RUSH:  Right.  So he got a little fired up there with Trump’s comments that it’s the worst time to be black.  That did set ’em off.  This is one of those no wins, but this gets to my point that they’ve been voting Democrat for 50 years, a little longer than that, and they’re complaining about the same thing.  Everybody that votes Democrat is complaining, especially minorities.  They been voting Democrat for 50 years, they’ve got same complaints.  Nothing gets improved, nothing gets done.  And the Democrats keep telling ’em how bad it is.  Obama and his buddies continue to tell ’em how bad it is.  They make it sound like it’s as bad as it’s ever been, that we haven’t gained any ground.  I think that’s all attributable to what the Democrats say in the campaign.