RUSH:  Great to have you on the program, sir.

CALLER:  Thank you.  Well, I think it’s pretty clear to anybody that’s paying attention that it’s desperation time in the Hillary campaign, and she’s got all of her sycophants out in the mainstream media trying to do her job. And along the way, it’s in my mind, playing the race card against Lester Holt, telling him how to do his job, patronizing him and implicit with that is the implicit threat if he doesn’t toe the line.  I don’t hear them doing that to Chris Wallace or any other moderator, so — 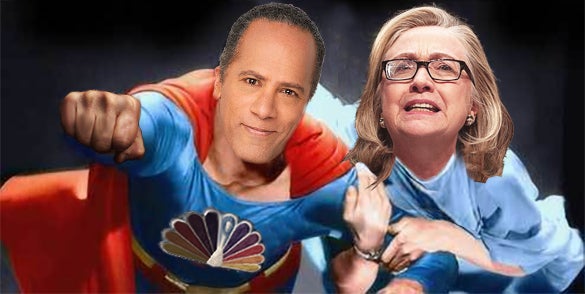 I went over there to appear on it, and Lester was doing news or something at MSNBC or CNBC, and I ran into him in the bathroom. He was washing his hands.  And he said, “Hey, I recognize you. I have friends that listen to you,” blah, blah. He was a very nice guy, and I had time, maybe five minutes of chatting with him.  It’s the only time I’ve ever seen him.  But he’s in the news media.  He’s obviously a card-carrying liberal and leftist.  I mean, you can’t get the jobs he’s had without being.  But can you imagine nevertheless how the guy — I don’t know.  Maybe he’s not bothered by it because maybe this is what he would do anyway.

But to have the entire news media telling you what to do and how to do what you do, and then I like old Gary here throwing the race card down on this.  I hadn’t thought of that.  Lester is African-American.  And here’s a bunch of leftists basically acting like he can’t do this on his own. He can’t do this without being told how.  He can’t do it without be given guidance, demands, or what have you.  And I’m telling you, I feel for Lester, because we all know what happened to Matt Lauer and to a lesser extent Jimmy Fallon.  They are still dumping on Matt Lauer over that presidential forum that he did with both Hillary and Trump where he was fair with Trump and demanded answers from her on her email server.

I don’t know what it’s like to be Lester today.  It would be a tough job to moderate one of these debates anyway if the outside influences are at a minimum.  But with this, I mean, to me it’s close to being threats.  It’s almost like Lester is being threatened here.  He’s gotta fact check Trump.  And Hillary’s got seven lies, seven lies that Trump tells that she wants Lester to go after.  The media’s picked all seven.

It was a concerted, focused 24/7 effort to destroy everything about Bush’s Iraq war and Iraq war policy.  And because they spent so much time on it, they really did work all of their supporters into a frothy frenzy over it, to the point that to this day it remains one of the most mobilizing, motivating issues to turn Democrats out at the polls and to get ’em worked up and angry.  It’s really a fascinating study in group psychology.  I don’t think this was the purpose.  I think the purpose was to destroy Bush.

But in the process, they created this issue called Iraq that has become a defining issue for Democrats and leftists.  And they believe it is still an issue on which they can win, because they believe that every American’s residue opinion on Iraq is equal to theirs.  Most Americans have moved on.  Most Americans, in fact, when you think of Iraq, you now think ISIS.  Most Americans, when you think of Iraq, you think of the Middle East, you think about how ineffective Obama has been.  But to the left, all of this in the Middle East is because of Bush and because we went to Iraq in the first place.  If we had never done that there wouldn’t be an ISIS, there wouldn’t be a civil war in Syria, there wouldn’t have been Benghazi, that’s what they believe and this is what the left has had made them believe.  And so it’s a seminal, number one issue for them.  And it is paralyzing. 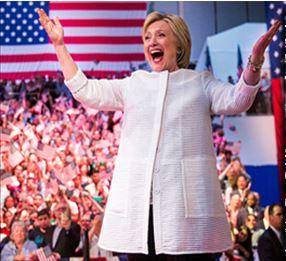 Robby Mook was on This Week.  He said, “All we’re asking is that if Trump lies, that it’s pointed out.  It’s unfair to ask for Hillary both to play traffic cop while with Trump, make sure that his lies are corrected, and also to present her vision for what she wants to do for the American people.”

And Stephanopoulos said to Mook, “But isn’t that what a debater is supposed to do?”

And Mook said, her campaign manager, “Well, I think Donald Trump’s special. We haven’t seen anything like this�So we’re saying this is a special circumstance, a special debate, and Hillary should be given some time to actually talk about what she wants to do to make a difference in people’s lives. She shouldn’t have to spend the whole debate correcting the record.”

Does that not sound like a bunch of babies?  It sounds like a bunch of trophy people.  You know, people get trophies just for showing up, not for winning anything.  “Yeah, it not fair. Everything Trump says is a lie. He lies all the time. It’s all he does, and if that’s all Hillary does is correct his lies she won’t have time for her vision. So Lester, Lester, it’s so special because Trump’s so bad.  Lester has to point out how Trump’s lying, because Hillary doesn’t have time to do it.”

Man, they’re scared.  “Donald Trump’s special.  We haven’t seen anything like this.”  That is for sure.  And then this:  “And what kind of lies should Holt factcheck? In its email announcing the conference call –” the conference call with the media to give them their talking points, guidelines on trying to persuade Lester to actually debate Trump along with Hillary, “– the Clinton campaign provided a handy list of ‘Trump’s Seven Deadly Lies.’ Number one on the list was the Trump claim that seems to anger Democrats most — that he opposed the war in Iraq.”  So that’s what they’re fit to be tied over.

Here’s Mark in Houston.  Mark, thank you for calling.  You’re next on the EIB Network.  Hello.

CALLER:  Yes.  Rush, the media hype that I’m listening to today about this being the greatest show on the face of the earth, the hundred million viewers of all time, it puts the same gut feeling in my stomach when I started hearing about the professional integrity and the straightforwardness of Mr. James Comey before he had to get up there and testify.  I had a bad feeling about that then, and I kind of have one now.  I hope you’re wrong, but I do believe they’re very confident that they have something.

All of a sudden now these guys want a million viewers watching this.  They want millions of viewers watching this debate tonight, where a month and a half ago when they were prepping it they said, “No, let’s do it on Monday Night Football when nobody’s gonna watch. Now all of a sudden they’re hyping it like it’s gonna be the greatest thing.  I think they have something, and it’s not just Les Holt. It’s the research battalion of the media that’s gonna come up with something and lambaste him on something.  But who am I?

RUSH:  Well, look, this is common.  I was talking about this with Kathryn last night.  It’s like the Super Bowl and you think your team, if your team’s in it, is gonna blow it.  I’m sure there are Trump supporters that are biting their nails today saying, “They got something. They’re gonna unload something and Trump’s not gonna be able to deal with it and we’re gonna lose it all tonight!”  You got people thinking that.  You got people worried, “Oh, my God, oh, my God, a hundred million people, Trump’s gonna say something. Oh, my God, he’s gonna blow it, I can’t watch, I can’t watch, I just know Trump’s gonna –”

Or you have people saying what you just said.  “They’ve got a big secret. Hillary’s gonna come out and she’s gonna announce that she’s gonna give away student loans and Trump’s not gonna have an answer, oh, no, it’s gonna end, and oh, my God, oh my God.” It’s a natural fear that people have since they’re so invested in it.  What I think is going on here, you’re taking the original statement they wanted this debate up against Monday Night Football hoping nobody would watch, just like Hillary had no audience for her debates with Crazy Bernie.  But now you’re thinking since the media’s drumming up an audience for this, that they’ve got something.

Well, there’s no question the media is hoping they take Donald Trump out tonight.  But I think what all of this is adding up to, what did Robby Mook just say?  Well, Hillary can’t be expected to do it all.  This is only the smartest woman in the world, folks.  This is the woman Barack Obama said at the convention is more qualified to be president than anybody who ever has been, including him and George Washington and Abraham Lincoln and Bill Clinton.  Obama said that (imitating Obama), “Bill, you and I, we both have to agree with it, but she’s so much more qualified than you and I ever have been in our dreams, Bill, and she’s more qualified than anybody, ever.”

Okay.  Smartest woman in the world, more qualified to be president than anybody who’s ever been president, but all of a sudden she needs a moderator to point out Trump’s lies because she doesn’t have time to do that because if that’s all she did she wouldn’t have time to spell out her vision for America.  The smartest woman in the world.  I think they are lowering expectations for her.  And I think they are — how do I say this politically?  How do I say this?  I really think their main objective is keeping her vertical for 90 minutes.

RUSH:  Look, folks, cutting to the chase here.  Hillary is pathetic at this.  If you watched her debates with Crazy Bernie, you know that.  If you watched her debates with Obama, she’s not good at this.  She’s looking for cover.  You know in a debate, and we all find ourselves in debates constantly.  Now, maybe not formal debates like will be tonight, but we all run into confrontations with people, within our families, and so many people don’t like it, some do.  Some people avoid confrontation. It makes ’em nervous and uncomfortable, don’t like being critical of people. But people that like it, people who excel at it, know how to use somebody who lies frequently or infrequently.  You know how to turn a lie into something positive for yourself.  You know how to challenge it.

What’s being made obvious here, Mook, the campaign manager, himself is making it clear.  I can’t believe he’s out there saying Lester needs to do it because if Hillary had to challenge Trump’s lies, that’s all she would have time for, and she wouldn’t have the opportunity to present her vision for the country.  She can say whatever she wants when her allotted time comes up.  She can use it to refute Trump and use the refutation as a transition into whatever she wants to say about how she wants to destroy the country or she can ignore Trump’s lies.  She can kind of nod, grimace, as though it’s painful to hear this stuff.