RUSH: I’ve got a bunch of stories in the Stack that are the same thing as this sound bite.  This is ABC News Good Morning America, Amy Robach is the news infobabe, the anchorette.  She spoke with a group of undecided voters about last night’s debate, and during the segment, Amy Robach and an unidentified voter had this little exchange. 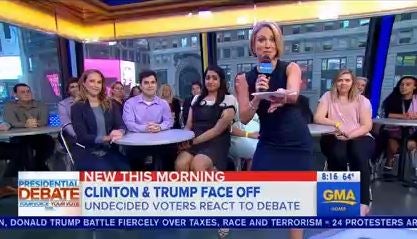 MAN:  Less celebrity, less Kardashian out of Trump. And less Bernie, less liberalism out of Hillary.

RUSH:  What she was amazed at is the debate didn’t change anybody’s mind.  Remember, now, the Drive-Bys are looking at this as Hillary hitting a grand slam, she took Trump out last night.  They’re hoping largely, and many of them think it actually happened, may take some time to show, but she demonstrated that she is so good at this, he’s a rank amateur and so forth, and they think that he just embarrassed himself.  And I’ve got a couple stories in the Stack, focus groups that thought Trump won.

There’s only one snap poll that shows Hillary won.  All of the other snap polls, internet polls, professional, whatever, every one of them after the debate last night shows Trump the victor, big time.  Only CNN’s poll shows Hillary a big winner.  And the Drive-Bys can’t figure it out.  Amy Robach here was stunned that only two people changed their minds last night in their focus group at ABC.  I’m telling you, the disconnect is big, and the gap of understanding between the people in Washington, in news media, the New York/Boston/Washington corridor and the rest of the country, that gap is widening.

RUSH: Rick in Cedarville, Michigan, you’re next.  Welcome to the program, sir.

RUSH:  Wow.  Thank you very much.  I appreciate that.

CALLER:  And I appreciate you.  I really did feel that Donald Trump was playing rope-a-dope with Hillary, that he came out strong.  And really, he doesn’t want to peak too early.  He’s got a couple more debates to go, and I thought during that debate that she was starting to lead with her chin.  I started yelling at the TV saying, “Come on! Get her.”  And he wasn’t taking it.  But I really think that she’s gonna offer it up again, and he’s gonna get stronger as things go on.

Well, now, Colorado’s back in play, and she has pulled out of Ohio.  She suspended her advertising in Ohio.  So they were in Panic City.  Of course Hillary had the medical incidents, the seizures, the near collapse, the coughing spasms, which could erupt at any time in the future.  So last night they think, ’cause they’ll listen to the Drive-Bys — it’s an incestuous group of people, and they’re listening to what they say — and she’s gonna conclude that, “Okay, we’re back to normal.  This guy can’t keep up with me.

So there may be some Trump supporters unhappy that he wasn’t a little bit quicker off the draw with what they think are hanging curveballs that could have been just knocked out of the ballpark.  But you’re right: There are two more debates. Remember the first debate between Romney and Obama? Let’s revisit it for a second.  It’s interesting to note the way the Drive-Bys played it.  The first Romney-Obama debate, there was real concern after that debate that Obama didn’t show up.

I mean, he was there, but he was detached. He didn’t look interested in what was going on. Romney was smoking him, and the Drive-Bys were all in atwitter and in a panic after that first debate between Romney and Obama four years ago.  But instead of reflecting that, you know what the Drive-Bys said?  They said, “You know what?  Maybe Obama is smarter than the rest of us, and maybe Obama just decided to look like he’s not taking it seriously because who is this Romney guy anyway? 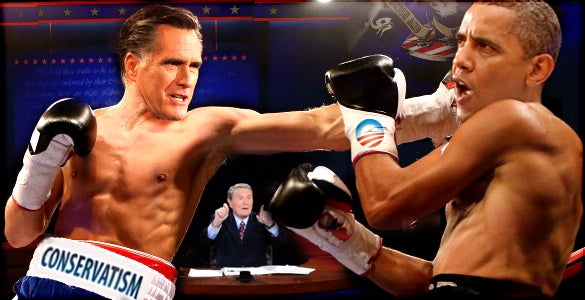 “He wasn’t over-prepared; he wasn’t prepared at all!  He wasn’t scripted,” and they found every which way they could to praise Obama.  And if you remember, folks, that first debate, it was bad because if you remember and you were a Romney supporter, remember how up you were after that debate? And then remember in the next two debates when Benghazi came up and a couple of other items, Romney didn’t touch them?  Remember how mad you got?  You didn’t think Romney didn’t know it.  You didn’t think Romney was prepared.

You just figured, “Why the hell isn’t he going there?” and people concluded that Romney thought he did so well in the first debate that the strategy then became to play it safe in the next two.  Basically go into what they call in football the prevent defense.  “Go ahead and let the other team gain whatever ground they want, but don’t give up a score,” and that’s when they thought Romney was doing, and they got mad because he wasn’t taking it seriously, didn’t go in for the kill.

Now we have somewhat of a reversal of that, and the Drive-Bys are not saying of Trump what they said of Obama.  They’re not finding ways to praise Trump.  They’re not finding ways to find anything positive about Trump.  We knew this is a rigged game.  We knew that the referee is on the side of the Democrats because the referee, whoever the referee is, is a Democrat first and a so-called journalist second.  I mean, we know that Lester Holt did not challenge Hillary once last night.

He did challenge Trump six or seven times, got him to argue about the Iraq War. Did I not tell you yesterday, too, on this that the Iraq War is one of the most important, biggest deals to these Democrats? I’m sitting there listening to this last night… Can I share this with you? I’m watching Hillary go after Trump by accusing him of supporting the Iraq War, and he didn’t.  Now, as an aside, I thought Trump went just… He got way too much time saying, “Go talk to Neil Cavuto. Go talk to Sean Hannity. Nobody called Hannity!”

The two reasons that Bernie Sanders gave her fits was the Iraq War and her association with Wall Street.  Wall Street owns Hillary Clinton.  Wall Street has bought Hillary Clinton and whatever policy considerations she can give them if she gets elected.  They have bought her already.  That’s what all the speech income is really all about.  And she sits up there running against Wall Street, as though she’s trying to convince her supporters that the big banks are evil, and she knows it.  Then she went on the…

What caused the economic collapse 2008? It was the subprime mortgage crisis.  Trump didn’t mention that.  I mean, there are, like I say, two or three examples where he just had a… If you don’t like “hanging curveball,” he had a giant softball.  He could swat a beach ball thrown his way. He could have swatted it out of there. But that was then, and this is now.  But I just… I know what these people are gonna do and how they’re gonna do it, and Trump ought to, too.  He ought to know Lester’s gonna be biased; he ought to know Lester’s gonna argue with him, or whoever the debate moderator is next time.

With possible exception of Chris Wallace, who’s going to moderate one of these things.  But other than that, it’s gonna be what we got last night.  Anyway, there are two more of these things.  And as was demonstrated back in 2012, Obama was thought to be in big trouble after that first debate, and he wasn’t, was he?  That first debate didn’t end up hurting Barack Obama at all, did it?  I know he had incumbancy on his side, but still.  He was horrible that first debate.  It didn’t matter because there were two more, and there are two more here.