The “Fact Checkers” Are Full of It

RUSH: I’m just going through my Stack of Stuff here to see what I have left that I haven’t touched on that still fascinates me.  Not all of it does each and… It’s show prep. By the time I get to it and the program starts, I lose interest in some of it.  Well, a couple stories here on Lester Holt.  It was predictable what Lester was… Look, folks, if you didn’t think… If you were hoping that Lester Holt was gonna somehow be fair-minded, you don’t remember what happened to Matt Lauer. 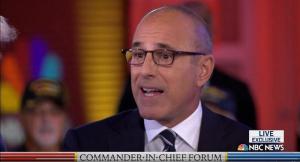 “[B]owing to pressure from the Hillary Clinton campaign and the liberal media by ‘fact-checking’ Republican nominee Donald Trump…” By the way, this whole fact-checking business? It’s not what it is.  You know what fact-checking is?  Fact-checking is nothing more than an opportunity for the Drive-Bys to opinionate in the news by calling it fact-checking.  Now, here’s a piece from Kelly Riddell.  I didn’t print where this comes from.  This might be McClatchy. It’s not McClatchy.  It might be Breitbart.  I don’t think it’s Breitbart.

I’m sorry, I didn’t print out the website. (interruption) They say it’s a popular one. I know that. I just don’t remember what it is.  But there are “Eight Examples Where ‘Fact-Checking’ Became Opinion Journalism.” This is the whole point.  In fact, James Taranto — who is a great blogger, The Best of the Web blog, part of the Wall Street Journal empire. James Taranto actually tweeted that fact-checking “is opinion journalism pretending to be some sort of heightened objectivity.”

That’s even better because that’s exactly right.  The Drive-Bys do their fact-checking under the guise that they have no bias whatsoever, that they’re totally objective and they’re looking at these claims and they’re being the final arbiter with no bias whatsoever, and it’s patent BS.  And so what Kelly Riddell has done here is give eight examples of supposed fact-checking which are really nothing more than attempts at opinion journalism.  The first one is from the New York Times.

Trump made this assertion in speeches in September. “Fact check: ‘An aide told the FBI of only two occasions in which phones were destroyed by a hammer.'” Oh, so Trump is lying. Trump is saying that Mrs. Clinton destroyed 13 smartphones, and the fact check says, “No, no, no. She only destroyed two.” The next “Trump quote: ‘We have cities that are far more dangerous than Afghanistan.’ Fact check: ‘No American city resembles a war zone, though crime has risen lately in some, like Chicago. Urban violence has fallen precipitously over the past 25 years.'”

There’s are not fact checks.  These are bogus, opinion-oriented assertions.  But of course the low-information voters that read this stuff and even some, well, relatively intelligent people think that what we’re getting here is legitimate fact-checking.  They point out that “the New York Times wrote on Sept. 9 that ‘murder rates rose in a quarter of the nation’s 100 largest cities, and that ‘the number of cities where rates rose significantly was the largest since the height of violent crime in the early 1990s.'”

So while the New York Times is fact-checking Trump and his claim that cities are far more dangerous than Afghanistan… They fact check says (paraphrased), “There’s no such thing! We don’t have any cities that look like war-torn areas, strife with war and so forth,” and the proof is that the New York Times has been worse in describing American cities than even Trump.  The next “Trump quote: ‘We’re presiding over something the world has not seen. The level of evil is unbelievable.’

“(September 19, Fort Myers, Florida, rally) Politico fact check: ‘Judging one “level of evil” against another is subjective, but other groups in recent history have without any question engaged in as widespread killing of civilians as ISIS.'” So Trump is attacking ISIS, and the Politco does a fact check and says, “No, no! There’s some just-as-bad groups.”  It’s insane.  It’s not fact-checking.  I’ll telling you, it’s not fact-checking.  It’s… Well, it’s opinion journalism.  It’s worse than that.  The next “Trump quote: ‘Hillary Clinton is raising your taxes, it’s a very substantial tax increase.’

“(September 20 High Point, North Carolina, rally…). Politico Fact check: ‘Clinton has not released the full details of her tax plan, but she has sworn off tax hikes for households earning less than $250,000 a year. The vast majority of tax increases she proposes … affect the highest earners.'”   Well, the fact check says that Hillary’s gonna raise taxes.  That’s what Trump said.  Hillary Clinton’s raising your taxes, a very substantial tax increase.  They want a fact check and say that Trump’s wrong and in fact-checking they admit that Trump is right.

And then in December, when “George Stephanopoulos asked her ‘Is that a rock-solid promise?’ (on not raising taxes on households earning less than $250,000) she hedged. ‘Well,’ she said, ‘it certainly is my goal.'” And then the Trans-Pacific Partnership.  That came up last night, and Trump nailed her on that.  She was trying to go back and forth, change her mind, originally for it, then decided she was against it and so forth.  Anyway, I just wanted to share with you the examples of these “fact checks” because this has become a campaign plank.

Salena Zito.  I’ve mentioned her today a couple times, and I quoted from her columns in recent days and weeks. The Pittsburgh Tribune-Review is doing an in-depth study of the voting population of Pennsylvania and how so much of it seems to be moving toward Trump.  She had a piece, a column recently in The Atlantic that I think a really pithy, if you will, line to try to explain to people how Trump is covered and perceived.  And it’s this.  Very simple. “The press takes [Trump] literally, but not seriously; his supporters take him seriously, but not literally.”

They do.  They think every liberal is Mensa. Every liberal in the world is as smart as any other liberal.  That’s what makes liberalism what it is.  Liberalism is the ideology of the intellectual.  It’s the ideology of the super smart.  And by the same token they think that anybody who’s Republican or conservative is an absolute Deliverance-type hayseed, hick.  And so they are totally incapable of understanding.  They take Trump literally, but not seriously.  And they think everybody else does on their side.

It’s just another example of the great divide and the disconnect that exists.  And I think these people, this whole campaign season, this entire year of this campaign has been noteworthy for illustrating this divide.  How the establishment of both parties to this day still doesn’t really understand the Trump phenomenon.  The closest they can get to it is it to insult Trump supporters and say they’re a bunch of angry racist bigots who finally have found a Svengali who’s willing to say what they believe, and it’s total contempt, it’s total condescension, and they don’t get it.  And, as such, they are continually surprised when Trump doesn’t away, when Trump continues to grow, his popularity expands.  They literally are clueless.

RUSH:  Look at this. Look at this. We’ve got a fact check from Politico. Here’s the headline: “Trump Is Exaggerating Clinton’s ’30 Years’ in National Policy — Trump has said at least three times that Hillary Clinton has been working on trade issues, and other national policy issues, for 30 years. But as Clinton said, it hasn’t been ‘quite that long.’

“In 1986, [she] was Arkansas first lady, and her involvement on trade policy would have been limited at best.” Okay, make it 26 years.  This is exactly the point.  This is a so-called fact check: “Trump lied! Trump got it wrong!” Okay, 25 years, then.  Ten years. I don’t care what it is.  The woman hasn’t advanced the ball at all.  She’s continuing to complain about the things she complained about when she first showed up.  Nothing’s any better.  What more needs to be said?