In 30 Years of Public Life, Hillary Clinton Has Never Made Anyone Feel Good

RUSH: If you establishment types really, really want to understand how Trump supporters look at this — if you really do — let me remind you of something. By the way, I’m proud of how often I’m seeing this pop up in columns and opinion pieces. It is something I have been reminding people over the past month. You guys in the Drive-Bys in analyzing Hillary’s debate, you’re judging rhetoric. You’re judging the spoken word.

That’s how you define intelligence (muttering), “It’s intellectualspeak. You communicate (muttering) so you’re really, really smart, really… Obama does intellectualspeak. It’s a specific pattern of speech to make everybody think the person is very smart.” People don’t remember that. Like today. People don’t remember what anybody said in that debate, and, by the end of the day today, they really won’t. But they’re not gonna forget how they felt during that debate.

You know, I’m one of these guys that I lament the role feelings plays in so much of our culture, but I can’t deny it, and this is unalterably true. Unless you have a particularly advanced power of communication skill like I do, people do remember what I say. Most people do not. But they never forget how you make ’em feel. And I’m telling you: Hillary didn’t make anybody feel special that night. She came across as robotic, a witch with a capital “B.” Trump inspired feelings among his supporters that they enjoyed and wanted more of. It’s how you have to look at this in part.

RUSH: Okay. I have a little more polling data here taken during and after the debate. Now, sadly, I don’t know whose poll this is because of the quirks in how things are formatted to send in email, sometimes the link is left off. So it looks like a Politico morning greeting email that they blast out to everybody, or maybe it’s from Hotline. I don’t know where this is from. But it really doesn’t matter because the details in it are true.

They want Trump to say it was a disaster. Of course they do! I maintain to you… Again, everybody saw the same debate; it’s just that they see it different ways. They’re looking for different things. And, as I say, I’m really proud. I must tell you this. A little bromide of mine is being picked up in countless places. I can’t tell you how many times I’ve seen this just in the last week. It’s this. It’s real simple. People will not remember what you say, what you tell them. But they’ll never forget how you make ’em feel. And Hillary is never going to win that one.

She’s never gonna be the clear winner in how she makes people feel. The facial expressions, the Nurse Ratched looks, the plastered and robotic smile to try to cover that up. I guarantee you, the Drive-Bys didn’t even see it. These great analysts in the media on the Democrat side, they didn’t even see it. They see a totally different Hillary from the one that we saw. They saw one that was just brilliant and on point and didn’t stutter and had all of other talking points down, who just nailed Trump left and right. 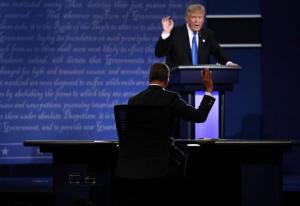 He’s being treated as though he matters and is a factor, and he doesn’t have his fingerprints on anything that they talk about. Donald Trump doesn’t have a tax policy yet. Donald Trump, whatever he thinks about things, it cannot be said to be a problem in the country today because he hasn’t done anything. That’s why Trump keeps focusing on his business success. That’s his record. You know, people say, “Why does he keep bragging about it?” He’s not bragging about it. He’s informing people.

Hillary brags about her record, lying about it left and right. Lester doesn’t even bring up the scandals at Benghazi, the scandals with her email, the scandal of the Clinton Foundation. Those things don’t even come up. But it’s Trump’s job to bring them up. The moderator isn’t gonna do that. The moderator is not gonna expose Hillary to any problems. Trump’s gonna have to do it. I predict to you he will in upcoming debates. Trump’s gotta talk about his record, and the fact that he knows how to run successful businesses.

Hillary says, “Well, running a business is not the same as politics.” I venture to say that there are a hell of a lot more people in business and handling money and generating profit and creating jobs, than anybody in government. Government doesn’t create jobs, for crying out loud, and Hillary Clinton doesn’t know the first thing about it anyway. Neither does Barack Obama. Hillary Clinton doesn’t know the first thing about health care other than theory, sitting around discussing it with a bunch of other liberals in the faculty lounge.

Obama has demonstrated he doesn’t know diddly-squat about health care, about websites, about the World Wide Web that he wants to give away to the UN. They don’t know. They have no practical experience in these areas they want to take over and are taking over. Hillary Clinton has nothing. She knows nothing about the energy business, but she thinks she does. And what she believes, this climate change hoax, putting those beliefs into popular practice is a disaster for the United States energy economy.

Barack Obama doesn’t know anything about climate science. He doesn’t know anything about energy. They have never been in that world. They’ve spent their lives resenting it. They’ve spent their lives trying to punish people, in fact, who are successful in various elements of corporate life. You talk about arrogance or hubris? I mean, the idea that a bunch of rhetoricians and theoreticians know better how to build buildings, housing areas, developments and so forth? Pharmaceutical companies, energy companies? They know?

You can track the incompetence, you can track many times, and you can also track something else. Thirty years, and no successful track record. Hillary Clinton after 30 years or 25, whatever it is, is still pushing the same things that she came into public life pushing: Hate trickle-down, hate Reagan, tax the rich, the rich aren’t paying their fair share. That’s the starting point, and nothing has changed. Hillary Clinton and her husband have been in business for 30, 25 years, and she is still promising to do the same things!

So they point us to great success stories, like Hillary Clinton. Right. I’m telling you, the American people are wise enough, enough of them are, to not fall for this. Mrs. Clinton can’t point to anything but caring. They say nobody’s done more for children than Hillary. Where? What? I’m serious. What has she done? “Well, she spent all that time with Marian Wright Edelman, Children’s Defense Fund.” Yeah, but what happened there? “Well, you know, they cared about kids.” Yeah, but what did they do caring about kids? “Well, you know, they protected them from their abusive fathers.” Oh, is that what they did? Yeah, yeah, they protected children from their abusive fathers.

But where is this endless parade of people who one time were children that Hillary Clinton took under her broomstick and shepherded to adulthood to now a happy, productive life, where are these people, where is the walking evidence of all of Hillary’s caring? They can’t do that. So what do they do? They turn fire on Trump and tell you that he’s all sorts of bad, all sorts of mean, all sorts of evil. And they’d be doing the same thing if the nominee were Ted Cruz.

In fact, it would even be worse if it were Cruz ’cause they would be zeroing in on all kinds of conservative issues that they just despise and are scared to death of. So, in addition to what they’re trying to do to Trump, and same if it had been Marco Rubio. Even if it had been Kasich, it’d be the same thing ’cause that’s all they’ve got. They don’t have a candidate in Mrs. Clinton that they can ballyhoo, that they can promote, that they can cite a record experience of great achievement and accomplishment, unity, can’t do it.

And so while doing all that, they then try to plug Trump into this same system because that’s the only way they can really disqualify him. If they treat Trump as the person he really is, the outsider who represents a whole new way of trying to do things since this country’s on the wrong track and the people who’ve been telling us they are our betters and they know more and they care more are making a disaster of things.

Well, look now what they’ve done to the college degree. They have essentially turned it into an albatross. Each graduate leaves college with an amount of debt, or the vast majority with so much debt in student loans that they’re behind the eight ball for years, if they can then find jobs in their majors that qualify as careers featuring advancement.

So all these brilliant people, the best and brightest, people in the establishment, smarter than we are, better than we are, more caring and all this, and the college education as an institution for Americans to climb the ladder of success, they’ve done great damage to it as well as a lot of other institutions and traditions.

Trump represents an alternative way. So his supporters are not judging him on debate points. They’re disappointed he didn’t destroy her when he had the chance. I mean, I think that’s the big deal. Trump supporters think that he had a chance to really inflict major political harm and didn’t because he either missed it, too busy thinking about himself, making everything personal, or just wasn’t prepared or whatever.

But that anger is not the kind of anger that is gonna make ’em leave him. It’s the kind of anger that makes ’em frustrated and hell-bent on him doing better. One other stat. Forty-five percent of people who watched the debate said they did not watch the whole thing. That was a number I was waiting for, I was curious. I don’t know how long they watched, I don’t have that data yet. Forty-five percent said they didn’t watch the whole thing, and 55% lied and said that they did.