RUSH: To Hayward, California. This is Bob. Bob, it’s great to have you with us. Welcome, sir, to the EIB Network. Hi.

CALLER: Thank you, Rush. It’s an honor to speak with you. A little earlier you were speaking about the decline in the NFL’s numbers. And just about the same time I was on my ESPN app looking at the stories there, and there’s a story from Sunday’s game about Antonio Brown, wide receiver for the Pittsburgh Steelers, that he got told by the ref he’s gonna be benched if he didn’t take off the blue spikes he had with pictures of his children on them. And the fines are justified by the NFL in this article because they make, quote, a personal statement, which is not allowed, yet we have the Colin Kaepernicks and whatnot out there with their personal statement. And I just think it speaks to the hypocrisy and the blindness —

CALLER: — that these people have.

RUSH: Here’s the deal on that. This is the deal. The way the NFL would explain this to you, just a wild guess, but this is what they’d tell you. There are two things going on. Kaepernick is pregame, not on the field, and is not violating any uniform code. Antonio Brown is. The NFL, they have a guy. Well, multiple people. Merton Hanks, former cornerback for the 49ers, used to be this guy, but he got a promotion in the NFL office. They have a guy who is in charge of this.

There is an NFL representative that goes to every game, and during the pregame and game this guy studies what players are wearing, looking for uniform violations, including whether or not shirttails are tucked in or not, whether or not both pairs of socks are being worn at the right height, if shoes meet league and individual team standards. They have a legitimate uniform police in the NFL, and it’s done because of marketing. 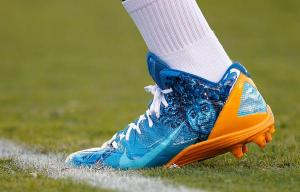 And these players get fined — you just don’t hear about it — they get fined for shirttails untucked. They get fined if the stripes on the jersey are not seen sufficiently. You wouldn’t believe how the NFL polices the uniform. It’s a marketing thing. It’s related to sales and loyalty to sponsors.

I saw the story, Antonio Brown showed up with a pair of shoes, and each shoe was partially blue, which is not a Steelers color. Steelers shoes are either all white or white and gold. But you can’t wear black. Frankly, I prefer white. I think white makes players look faster. I hate these teams like the Colts and the Bears with dark jerseys wearing these dark shoes, I just think it looks — look at the Raiders, the Raiders have these dark jerseys and they’re wearing white shoes. It just looks better. But that’s me. I wish teams would change that color combo. But they police this stuff like you can’t believe.

And so Brown came out, I didn’t know that it was his kids’ pictures on the shoes. I just knew that half the shoe was blue and there was some blue, like a powder blue or a dark blue along with the gold, and they made him change. It would not have been the referees. Well, I guess it could have been. It would have been these league police officers. And if he didn’t, they weren’t gonna let him go on the field in the second half. If he didn’t change that pair of shoes, he was not gonna be allowed to play. It wasn’t, “Okay, go ahead and wear ’em and we’re gonna fine you, dude.” He wasn’t gonna be allowed to play.

And then over here you got Kaepernick — see, this is my point. We got the league and coaches telling these guys what they can’t do hundreds of times a day. But when it comes to trashing the flag, “I can’t tell a guy what he can’t do, I can’t.” We’ve got some Kaepernick sound bites, by the way, that are not gonna help things. We’ll get to ’em here when I have time coming up.

RUSH: Colin Kaepernick.  We just had a lengthy discussion here about the NFL and this uniform police.  I don’t know how many of you people were not aware of that, by the way.  I gather from my email that I checked during the break that a lot of people were not aware of how strictly the NFL polices the uniform and its proper display, but they do.  I mean, they ride herd on this.  They fine players and threaten them.  And the story is Antonio Brown, number 84, the Pittsburgh Steelers, was told he can’t play the second half if he didn’t change shoes.

So a caller said, “Imagine that, here we got ’em telling a player for the Steelers he can’t play if he doesn’t change his shoes and then when Kaepernick comes out, does whatever he does, nobody says he can’t do it.”  Well, one of them is a pregame thing that doesn’t involve the field of play and the game, and the other one does.  That’s probably how the NFL would explain it. 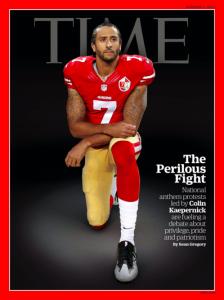 But when it comes to what some people think is trashing the country, “Oh, we can’t interfere.”  So, Kaepernick, the second-string quarterback for the San Francisco 49ers,  got all this started, as you know, and he’s on the cover of TIME magazine.  Well, once that happens to you, you gotta stay on a roll.  He’s the second string quarterback, he’s still not starting.  It hasn’t helped him move up the depth chart on the 49ers, but now he’s gotta keep it going, and here is how.  This was yesterday at the 49er practice facility in Santa Clara.  Kaepernick spoke with reporters about the debate.  Here is Kaepernick sound bite number one.

So here now, the second string quarterback for the San Francisco 49ers ripping Trump who says let’s make America great again. (imitating Kaepernick) “Well, America’s never been great, never been great for black people. We gotta start on that.”  People of color, he said, never been great.  You think that’s disgraceful?  It denigrates the memory and the achievement of every black person who has ever achieved anything.

KAEPERNICK:  To me it was embarrassing to watch, that these are our two candidates.  Both are proven liars and, you know, it almost seems like they’re trying to debate who’s less racist.  And, you know, at this point, talking with one of my friends, you have to pick the lesser of two evils, but in the end it’s still evil.

RUSH:  So there you have it, Colin Kaepernick of the San Francisco 49ers, the latest expert on American culture, now analyzing.  “Hey, you can’t be critical of him, the First Amendment, he can think whatever he wants to think about the debate, and he can say whatever he wants.”

Nobody’s saying he can’t.  People, I’m sure — in fact, I saw this comment, I first saw this on a sports blog. I decided I’m gonna read the comments here, I’m gonna go to the sewer, ’cause that’s what the comment section at websites is, a sewer.  So I went there.  And there were a surprising number of people in the comments of this particular website, it was NBC Sports Talk, I think, saying, “Hey, you know, this is the smartest thing the guy’s said yet.  That neither one of these two are worth anything, Trump, Hillary, they’re both lacking.”  He had a lot of support for that statement in the comments section of the blog.

More and more teams have started doing their own versions of what Kaepernick did, taking a knee, sitting.  On the Monday night game that nobody saw because of the debate, it was the Atlanta Falcons and the New Orleans Saints, and after the anthem both teams went on the field and formed a giant circle, linked arm in arm.  They didn’t take a knee.  They weren’t sitting.  It was supposedly a unified display of something.  But now it’s happening in high schools, junior high schools.  I read that it’s even happening in a 12-year-old football league, that players are deciding to do this.  Well, we shall see.