The Many Reasons Behind the NFL Ratings Decline

RUSH: Here’s Mark in Harrisburg, Pennsylvania, as we get back to the phones.  Hey! What’s happening?

CALLER:  Good day, Rush.  Hey, last week or two weeks ago when you were talking about the NFL, their viewership being down, I think you didn’t complete the analysis.  First of all, let’s say there are a lot of great men in the NFL.  You see that every year when they have the Walter Payton Awards, that people really do good.  But we always hear about the thugs and the bad guys.

So when the NFL turns down the Dallas Cowboys, not giving them permission to put the sticker on their helmets to honor the five slain officers, that really left a bad taste in my mouth.  And then when you watch the beginning of a football game, they’re doing the anthem, and they highlight those people who are kneeling or putting their fists up.  Personally, I wish they wouldn’t do that.  Don’t give them that platform.  You know, you want me as a viewer, you know, you’re not looking after my feelings.

RUSH:  All of a sudden, we’re seeing the anthem. Every time one of those guys takes a knee or raises a fist, by God, we’re gonna see it! We’re gonna see highlights of the anthem, and we do.

CALLER:  And then they’re naming these guys. Like I said, they’re giving them a platform.  You know, the NFL is putting a bad taste in people’s mouths by allowing the networks to do that and by not… You know, why couldn’t they honor those officers?  Give us a good explanation.

RUSH:  Well, don’t make me explain that.  Come on. You can come up with that on your own.  If I explain that, they’ll Alicia Machado me — meaning they’ll “Trump” me.

RUSH:  The subject of NFL ratings. Now, there’s a lot going on in the NFL to its detriment.  I’ve been amazed by much of it.  Much of the harm being done in the NFL is actually being transmitted by sports media, which can go either way.  I mean, on the one hand, you can say they are doing their job.  On the other hand they are literally attacking the hand that feeds them, in many ways.  Understand the sports Drive-Bys are every bit the leftist radicals that their brethren in the so-called straight news media are.

Now, the NFL, as far as what it’s officially saying about the ratings decline, is to really not acknowledge it except to say that they think there have not been great marquee matchups. They’ve gone on to say they’ve been up against a different kind of competition, the presidential campaign. They’re blaming presidential politics for a lot of this, and indeed, on Monday night, the Saints and the Falcons Monday night game had the lowest Monday Night Football audience in years, decades, actually.

But it also must be pointed out that even though the NFL’s numbers are down, they’re still dwarfing traditional broadcast television.  But nobody likes a downward trend in numbers because at the NFL’s level, at these networks’ level they’re looking at make goods or free commercials for sponsors. If you’re guaranteeing a certain audience and you’re charging X-amount per commercial on the guarantee of an audience, if that audience isn’t there, you owe the sponsor a make-good, free commercials or reduced rates for the rest of the flight to make up for what you’re not delivering that you promised.  And at those levels that’s a big deal. 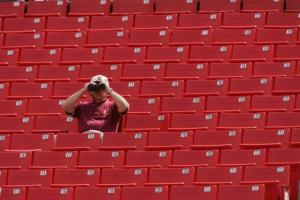 I don’t think the ratings decline, even though it’s showing up this year, is strictly because of things happening this year.  I think, as you know, if you’ve been a regular listener to this program, these things have been trending.  And they are many.  I think the overall apparent — let me give a real-world example.  The playoff game this past January between the Steelers and the Bengals. Now, to many people it was great TV, it was a great game.  You had action. You had an unexpected outcome. The Steelers coming back and winning after being down with no time left to actually come back on the field.  It was only because of personal foul penalties committed by the Bengals that ended up putting the Steelers in field goal range to kick a field goal to win the game.

They had no business winning the game.  It was one of the most outrageous losses I have ever seen.  It should have been embarrassing. It should have gotten people fired. It should have gotten people reprimanded.  It was an absolute disaster for the Cincinnati Bengals organization.  They hadn’t been to the playoffs since 1991 and they were destined to go, and what happened, because of on-field behavior, both during play and outside play. In other words, teams are standing around while penalties are being marked off and players are whining and moaning to the ref and one of them had made contact with the ref.  That’s another 15 yards.

There were 30 yards in penalties, an unnecessary roughness hit on a defenseless receiver to the head, and then a cornerback, Adam “Pacman” Jones complaining with the referees about something and touched one of them, that’s another 15 yards.  I think viewers see this kind of thing and this is not the kind of football they want to watch.

The people that advocate for it, “It’s great TV, man, great TV, and it was great hitting,” but it wasn’t football.  It looked like something you see not on the football field, and it makes people nervous.  This is a slow build.  That one game, that one incident, there is no one game or one incident that’s gonna be responsible for the decline.

The league, at the same time, you fans, I’m sure, note all the suspensions.  You can look at that one of two ways.  You can say that the league is going overboard here on penalizing these players for putting performance enhancing drugs in their bodies or human growth hormone, and you can think the league is being too restrictive here.

The other way of looking at it is, are there this many cheaters in this game?  Are there this many guys violating the rules?  And what that does is make people question the legitimacy of what they see on the field.  You know what one of the biggest arguments in football is what the heck is a catch anymore.  I don’t know about you, but I don’t like waiting five minutes for a referee to review video to declare something was a catch or not when it clearly looked like it was to the naked eye and even in the replay. But there’s this rule, “Well, it didn’t maintain control through the play.”

They hear that every day elsewhere in their lives.  They don’t want to hear it Sunday afternoon, Sunday night, or Monday night, now Thursday night.  It’s a number of things that I think are accumulating.  The suspensions of star players.  Deflategate.  Look, a lot of people think it was a legitimate suspension ’cause it’s the Patriots, and everybody thinks and knows they cheat.  Other people think, “My God, you took your biggest star off the field for four weeks!”

The NFL’s a television show — that’s what it is — and the NFL is a stage.  Those fields, those stadiums are stages, and the NFL owns the stage.  Now you have players trying to commandeer the stage that they didn’t build. That’s for their own purposes, political purposes, nothing to do with the game.  The NFL has made no bones about its devotion to America and its patriotism with so many big American flags on display and military groups participating in the national anthem and God Bless America.

Now the focus is on a bunch of players who are making millions of dollars talking about how oppressed they are in the greatest country on earth, and it’s not washing with a bunch of people.  So it’s not just one thing.  It’s a trend that is occurring with a whole lot of elements in it.  But you can’t read sports media today — you cannot read it — without endless stories on player here or player there accused of some crime or violating some NFL rule, abusing women, driving under the influence. Whatever it is.

It may be no greater percentage of the NFL than any other population group. But it’s being heralded! I mean, it’s being really pointed out. Then you’ve got to add to this the media doesn’t like the commissioner, and so they think everybody should hate the commissioner, and so they’ve kind of done to Goodell what they did to George W. Bush.  Now, I’m not gonna weigh in.  Whether Goodell deserves to be hated by the fans is beside the point now. He is, whether he deserves to be or not.

The media would tell us that he’s despised and hated because of the Ray Rice suspension.  “He didn’t take it seriously enough.  Ray Rice slugged his wife in that elevator and dragged her out of there like Trump and Miss Machado, and he only got a six-week suspension!” They blew up, and so now Ray Rice got a full-year suspension; they had to come back to it.  For that one incident that started the ball rolling on how the Goodell is out of touch. 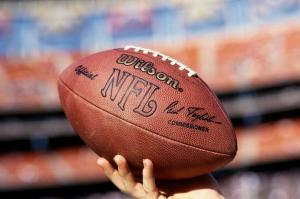 Any time now, because the sensitivity has been raised… Any time there is a collision on the field that involved head strikes and helmets, now the public (outraged), “My God, that’s cheating! How bad! Throw those guys out of there!” It’s totally change the way people watch the game, appreciate the game, understand how it’s played.  I think they’ve got huge problems here, and we’re seeing the beginning here of what could be a major problem unless they get their hand on it, and I don’t know that they know what their problems are.

Believe me, they’re not helping themselves when they promote all of these players taking a stand against the United States by virtue of action they’re taking with the flag and the national anthem.  They may think that’s a great thing. They may think in 2016 America, as “culturally aware” as people are, and the divisive nature we face now in our culture, that that’s really good; it shows the NFL is relevant and in touch with what’s currently happening.

It’s not why people watch. Whether people know it, whether ardent fans know it — and I suspect they do. But, believe me, going to a game, watching it on TV, there’s a lot of fantasy involved, thinking you can do it, how great that life would be. “Man, I would love to be an NFL player!”  You live your life through these guys, depending on how old or young you are.