RUSH: Back to the sound bites. Our buddy Jeffrey Lord, the American Spectator, was on Anderson Cooper 219 on CNN. Question from Cooper: “Wouldn’t it have been better for Trump to be the one to have broken the fact he lost $900 million? Break it a while ago, saying, ‘It was an unfair tax code. I took full advantage of it but I’m going to fix it for you.’ Why didn’t he do that that? Couldn’t he have done much greater help for himself if he had been the one to leak it?” 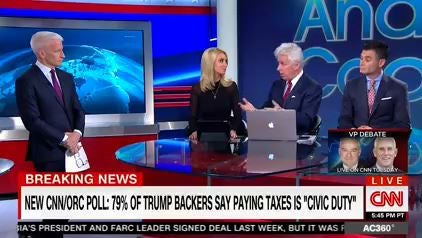 RUSH: Amen! It’s exactly that. The whole tax return ruse is designed to expose outsiders as not being qualified to be insiders. The whole thing! If you’re in politics your whole life, you structure your life to get elected and reelected, and you structure your tax return to do the same thing. You structure it so there’s no apparent wild loss, no wild gain. There’s no wild this or that. You pay a certain amount to charity, you pay 15 to 25% of your income to taxes, and you’re good to go. But an outsider doesn’t live his life like a politician does, doesn’t structure everything in life for public consumption.

A politician dresses a certain way every day for public consumption.

Outsiders don’t. So when an outsider wants to become president, “You better release your tax returns,” and he does or doesn’t, or they leak it — whatever the case may be — and we find out that the tax return doesn’t look anything like a politician’s. And then we’re supposed to say, “Oh, that’s not good. That’s not qualified. Look at all that, a $900 million loss!” There were a half million people that reported losses in the same year that Trump did of varying degrees.

It’s been in the tax code since the early 1900s! If it weren’t in there, companies would go belly up and we would lose jobs and jobs and jobs year after year after year. The whole thing is a ruse. But Trump did announce it! It was in his book The Art of the Comeback. He’s not made it a secret that he lost $900 million. So Cooper then says, “Do you think this story has resonance among people who are undecided or are on the fence?”

RUSH: Why, as I said yesterday, are there not stories of recovery and rebound and Trump turning it around and going from a year of losing that much money to now being such a huge success in real estate? Why are those stories not out there? I’ll tell you why. There are cultural and societal reasons why those stories don’t exist.