Family Farmer: The Climate Change Narrative Is Killing Us

RUSH:  Let’s grab a phone call here.  It looks like “Marie.” If I get your name wrong, folks, know the things here are compressed. The screen is squeezoomed into a narrow top-to-bottom, and everything’s… It looks like Marty to me, but it can’t be Martie, M-a-r-i-t-e so gotta be Marie, I’m guessing.  Is it Marie in — in whatever it is, are you in Minnesota?

RUSH:  In fact, people — and thank you, Marie. I appreciate it very much.  I’m glad you called.  By the way, a tech note, I heard that call better than I have ever heard a call in Palm Beach.  I mean, that call sounded like it was right in my ear rather than in a barrel 15 feet away.  Anyway, that’s just for inside basketball stuff, folks.  Don’t let it affect the way you listen to the program. But the only way I can pass the information on is when it actually happens.  That’s how you get people to listen.  Otherwise, they think you’re making it up.

So climate change?  What is the big deal? People that don’t necessarily understand the point I’m making says, “Rush, what could possibly be wrong with try to save the planet?”  And I say, “Do you really think…?”  I mean, I ask people. “Do you really think — this is what they want you to believe — that the way you are living your life is going to destroy the climate?  Do you think…? Let’s say that President Obama wanted to do the exact opposite.  Let’s say that any president wanted to destroy the climate.

“So he calls in his cabinet. What would they do?  How would they do it?”  Have you ever heard anybody explain how they would destroy the climate?  Because they claim we’re doing it!  We’re destroying climate, and it’s so bad, Millennials actually believe it (a number of them) that the planet is not going to be habitable by the time they’re 65?  They’re being lied to, it it it it’s near criminal.  And all of it is being done to turn people to government, to accept more government, Big Government, and tax increases.

You go out and buy chintzy little cars that you don’t want to buy and you really — and, by the way, most people are desperately searching for meaning in their lives, and if you tell them that they can save the planet, why, maybe you can own it! You can have it in the palm of your hand.  So you tell ’em, “Support the government, tax increases, carbon tax, punish Big Oil, punish corporate interests.”  All of this — climate change, global warming — is nothing more than a vehicle. There’s nothing scientific about it.

It’s all done to get you to hate the same people the left hates and to suspect the same people the left hates and to make you distrust Big Pharmaceutical, Big Oil, Big Box Retail, Big Whatever. Whoever’s on the Democrat Party enemies list, that’s who’s to blame for this, and it’s all about turning you into a ward of the state, and they make it personal.  They tell you, “You can save the planet!” I read blogs written by young people 20, 25, 30 years old.  Stunning how they bought into this.

It’s frightening how they’ve bought into it, and it’s frightening how many of them think that it’s all science when none of it is science.  Do you realize the only thing…? There is only one thing that points to global warming, and that is computer models.  We don’t have a bit of data. We don’t have one shred of scientific data.  All of it is computer models forecasting twenty years from now, thirty years from now. You note they never say climate change in the next two years? They never say climate change in the next 10.

Because at some point, we would easily be able to prove that they’re wrong.  They make the prediction 30 years out, 50 years out, when many people are gonna be dead and won’t be around to know.  And if you’re young enough, if you’re 20 and they tell you 50 years, well, you’re still 70. So you’re gonna buy into it to try to save the climate so that there’s someplace to live.  And all this talk about going to Mars is rooted in the same thing, that the planet is not gonna be habitable.  And all of this is nothing but total political BS.

What we exhale, is creating the greenhouse house effect.  So, you see, we can’t even avoid it.  It’s a total political ruse, and it’s sad how it’s captivated so many people.  But I know how people do it. People want meaning in their lives. They think they can save the planet for their own adult years and so forth.  It’s just silly.  The earth climate is constantly changing.  We have no control over it.  It’s been much warmer than it is even now; it’s been much colder.

RUSH:  I honestly had no idea that when I began this program today that climate change and global warming was going to be as front and center as it is.  But we go with the flow here.  It’s not going to distract me from other things, don’t misunderstand.  But it’s all related, folks. It’s all the same thing. It’s all what we’re trying to defeat, and that is liberalism.  In the first place… Oh, I just didn’t have a chance to run this by you with any detail.  The Environmental Protection Agency has issued a 50-state climate warning.  Floods, drought, insect outbreaks.

You know, our first caller today, the farmer from Minnesota, was making an important point.  She was talking essentially about what’s happening here under the guise — under the aegis, if you will — of climate change.  The federal government, to save the day, is buying up more and more privately held land.  And they’re using it for the solar industry  (which is a money loser, and it’s irrelevant) and the wind industry, solar and wind.  Under the guise of clean, renewable energy.  We’re not there yet.  There’s nothing anywhere near being able to replace oil.

There’s not wind or solar that can power an airplane.  There’s no wind or soil that can power anything we need to build a highway, build a house, build whatever.  This is so ridiculous that it’s embarrassing to me to have to point this stuff out.  But the solar business, the wind industry are both totally propped up with federal and state tax dollars in the form of subsidies ’cause they can’t make it on their own.  There’s no way they can turn a profit because there’s no business there. 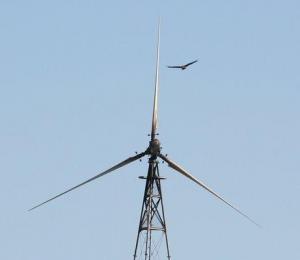 But all of this is being done to pay back big donors to the Democrat Party.  It’s just silly.  It’s like (if I may repeat my point about the consensus of scientists) this hurricane. We got this Hurricane Matthew just trucking up its track here, but they still don’t know where it’s actually gonna hit.  There isn’t “a consensus of scientists” that can tell us 12 hours out where this hurricane is going to make landfall but they want to tell us that a consensus of scientists can tell us what the global temperature is gonna be and the sea level is gonna be in 50 years when most of us are dead and won’t be around to know whether they lied to us or not?

And then they tell us we’re responsible for it.  It’s our fault by virtue of the way we live.  Can I give an example of that?  Let’s say that you’re on a cruise ship and you get mad at something, and you go to the edge of the railing and you spit in the ocean. The global warming people say, “See? You are affecting the oceans!  You just spit in it.  That means it’s anthropological. What’s happening to the ocean is anthropological, because you spit in it.”  They take one little incident like that that.

You spit in the ocean, the water volume in the ocean thus contains human effect, and makes whatever happens to the ocean our fault.  It’s idiotic.  The whole thing’s idiotic.  But they have been so successful in dumbing down basically critical thinking in the public school systems that people just scarf it up, particularly young people.  Does it shock you like this shocks me when you learn that there are some 25- and 30-year-olds who really have been made to believe that the planet will not be habitable when they’re 65 in another 30 to 40 years?

Where is the planet uninhabitable now other than where it’s always been, the North Pole and South Pole? And even that we can live there because we can learn to adapt.  Anyone who wants to, they can.  You might run into a bunch of ice looking for evidence of global warming on your way down there, but you can still live there.  You can live in the Sahara desert if you want to.  The whole story of humanity is adapting.

But we are being treated to humanity as just a bunch of walking neophytes incapable of doing anything — and if you are a rugged individualist or if you self-reliant, they are gonna come for you as somebody that can’t be trusted, somebody that doesn’t care.