How the Clintons Plundered Haiti


RUSH: Here is Bob in Las Vegas as we head back to the phones.  Great to have you, Bob.  Hi.

CALLER:  How you doing, Rush?  Nice to talk to you today.

RUSH:  Thank you very much, sir.

CALLER:  I have a question.  I’m not sure, but when Haiti… I looked on the news today, and it was like 600 people died from this hurricane.  But what happened to the $2 billion that went to them in the earthquake? They could have built themselves houses that were earthquake proof, hurricane proof, and everything else.  What happened to that money?

RUSH:  Why do I get…? You know the answer to that.  You’re just calling ’cause you want me to say it rather than you saying it yourself.

CALLER:  Well, was it the foundation, Hillary Clinton’s foundation?

They were able to get some of that money for their foundation.  Do you remember when…? Thanks for the call, Bob.  Do you…? I don’t think people remember this.  The Washington Examiner has the story. They ran it two days ago.  I had forgotten it, too, but I remembered it when this story.  “Clinton Foundation officials quietly refiled three years of tax-related forms this week after the New York attorney general acknowledged the charity had failed to disclose all of its donors in accordance with state law.”

And even beyond that, the Clinton Foundation has had to refile their taxes.  And I remember when the first report came, the reaction everybody had. “Well, how come they get to do it again instead of being penalized for it?  You file wrong, and you make a mistake, and they’re gonna come at you and demand penalties and what.  The Clintons made a mistake three times and they’re allowed to refile?”  And then we realize what the IRS did to Tea Party fundraising groups, denying them status.

So, again, it’s different treatment for different people.  And there’s another story here in the Stack. The Clintons are trying to make a big deal on how great their family is and how many… In fact, what was it? Oh, it’s Kaine.  You know, I shouldn’t say this.  I really shouldn’t say this.  When I was looking at Kaine the other night, Tim Kaine in the debate, I could have sworn I was looking at a Dr. Seuss character.  I couldn’t remember which. It was green. I couldn’t remember what the character.  Maybe it was the Grinch. (interruption) It was?

But the Grinch wore a hat, didn’t he?  Yeah, well, this character didn’t have a Santa hat on. It might have been the Grinch.  It was the raised eyebrows that did it, not the green face, don’t misunderstand.  But it was the eyes and the eyebrows, and I said, “Gee, he reminds me of this Seuss character,” but I couldn’t remember which one.  Anyway, he was going on and on and on about all the great…  What did they say, we’ve cured 10,000 cases of AIDS or we donated million cases? Whatever it is.

Do you know what the actual percentage of money the Clinton Foundation has raised that they donate so far to charity is?  It’s like 5%.  Five percent of what they have collected they have donated — and of course, nobody reports that, either.  That’s just… The Clintons get the benefit of the doubt that they’re mess winning a pass through, in other words, 90, 95% of what you donate goes to charities.  Do you know…? Are you ready for this?

Seven percent of the Clinton foundation, the money raised, goes for travel and entertainment expenses for people that work at the foundation, including a lot of Clinton family people.  So 7% travel, entertainment, whatever else — housing — for employees of the foundation, 5% donated to charity.  Which is fine.  Look, they’re not breaking any law doing it.  My only point is, they get the benefit of the doubt being people compassionate and caring greatly about people.

When there are lots of other charities that pass 80, 90, 95 — in some cases, 99%.  One of the charities we support here is the Marine Corps-Law Enforcement Foundation.  Ninety-nine percent pass-through.  You give them a dollar, 99 cents goes to the beneficiary.  Nobody makes a dime personally at MC-LEF and a couple of others. At the Clinton Foundation, 5% gets passed through.

RUSH:  I am reminded, ladies and gentlemen, that the T&E — not T&A, the T&E — expense the Clinton Foundation (that’s travel and entertainment) does not include the number of trips President Clinton took on the Pedophile Express, the Boeing 727 owned by noted sexual predator Jeffrey Epstein.  Clinton flew all over the world with the guy.  That did not come out of the Clinton Foundation.  That came out of Epstein whatever.  Clintons was just a hanger… Well, more than a hanger on, but he was flying on the plane with Epstein.

Now, a little bit more on the Trump ad buy.  This whole thing started with Maggie Haberman at the New York Times.  It’s been picked up by a guy named Sam Stein at the Huffing and Puffington Post, and this guy, Sam Stein, has tweeted that — and he’s confirmed that Trump is canceling ad buys in Florida and North Carolina and Ohio worth a total of $1.5 million. He says it could be higher.  But that the campaign may reinvest.

And then the next tweet was a clarification.  Trump is not leaving the states entirely.  He’s canceling ad buys in certain smaller markets within the states.  Well, that’s a big difference! But how many people are gonna hear the retweet?  The New York Times is a bible, and they have reported that Trump’s pulling out of Florida, North Carolina, and Ohio.  That’s all anybody’s gonna hear.  The retweet says: Well, no, no, no. He’s not buying in some of the smaller markets.  He hasn’t pulled out.

Now, as to our last caller and the foundation, the Clinton Foundation in Haiti, it’s a Breitbart story.  I’m just gonna read from it.  “The last time that tragic struck the tiny Caribbean country of Haiti, Bill and then-Secretary of State Hillary Clinton, according to scores of angry Haitians, used their billion-dollar charity and leveraged their global connections to enrich themselves and their moneyed cronies.  While then-Secretary of State Hillary Clinton’s State Department was funneling billions of dollars in relief money to rebuild Haiti, the Clinton Foundation was leveraging its influence to guide high-dollar contracts to longtime Clinton cronies.”

So what was happening is, the State Department was authorizing money to go to Haiti.  The Clintons were getting… She’s secretary of state.  She’s directing that money go to contractors and builders who had donated to the Clinton Foundation.  So Hillary’s in charge of the money that goes to Haiti.  The beef is that so much of the money went to the contractors and the builders, not the residents, and angry Haitians saw this happening, and they expressed their anger about it.

By leveraging the money that the State Department, via Hillary, directed to go to Haiti hurricane relief, then the money redirected to the Clinton cronies who did the work, this is how Clinton cronies reaped millions of dollars of profits off of the catastrophe that was the hurricane in Haiti.  And one of the people involved that did well was Hillary’s brother, a guy by the name of Tony Rodham.  And he was quoted in the story as saying (summarized), “Hey, don’t come to me about this.  I deal through the Clinton Foundation.” 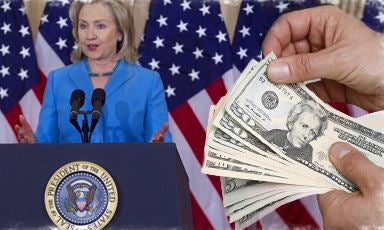 Clinton donors, “Wow!  This is so cool.”  So they I take the money, they do their whatever, their rebuilding, and they make sure to continue their donations to the foundation.  And over here there might be some work done to rebuild destroyed Haitian property and so forth.  That’s how the game is played, and that’s what connections are for.  That’s cronyism, if you want to know what it is, and it’s why… If you’re one of these contractors, you couldn’t care about liberal, conservatism, ideas, the Constitution.

You see an opportunity via cronyism and connections to be rolling in dough — and now Hillary’s running for president? Imagine the amount of money she’s gonna be able to direct as president for whatever reason.  You know, come up with a couple of executive orders that send money to this place or that place.  There’s always disasters happening.  It wouldn’t even have to be disasters.  But that’s basically what the story was that our caller wanted the answer to.

RUSH: Cindy in Burlington, North Carolina.  Great to have you with us.  How are you doing?

CALLER:  I’m quite fine.  How are you today?

CALLER:  I appreciate you taking my call.

CALLER:  Over a hundred years ago, my grandmother was born there.

CALLER:  And I resent the fact that on the Weather Channel this morning the man calling himself the president of the United States —

CALLER:  — made the statement that Florida wasn’t hit as hard as it was expected.  It got Cat 4!  There is a death, at least one.  That’s important to me.  This is my country.  I pay taxes here.  Part of my taxes go to his paycheck.  How dare he solicitate (sic) through the Americans to contact the Red Cross and donate for Haiti who the last hurricane, their government, along with Hillary Clinton’s misappropriated funds!

RUSH:  Wait a minute.  Are you saying that happened this morning, Obama on the Weather Channel…?

CALLER:  On the Weather Channel!  Check the newsreels!

RUSH: (chuckles) I don’t doubt you.

CALLER:  I sat on the for an for an hour and a half because it’s that important to me!  I have a sister in central Florida! My parents built the house in 1950 that they lived in and still owned up until last year when my father passed!

RUSH:  Wait a minute!  We’re running out of time here!

RUSH: Are you telling me that Obama was soliciting donations for Haiti?

CALLER:  Contact the Red Cross about sending money to help in Haiti!

RUSH:  He did that today?

CALLER:  Look at the newsreels!

RUSH:  Okay, the newsreels.  That’s where we have to find it: The newsreels.  All right.  All right.  Well, I knew that he was warning people to not get lazy ’cause the thing could strengthen later or maybe hit land.  I did not know he’d been soliciting donations for Haiti.  Well, I can understand why that would infuriate you.  I really do.