Drive-By Media: The Election Is Over, Trump Is Done (And Limbaugh Is Next)


RUSH:  So you’ve heard the conventional wisdom about Trump campaign, from the left.  He knows he’s not gonna win.  He knows he’s not gonna win.  What he’s doing now is trying to destroy the Republican Party, maybe because he’s been working with the Clintons all along.  I’m just telling you what some of the conventional wisdom that you’ll find on our side is.  People on our side are saying Trump knows now he’s gonna lose, and so it’s scorched earth. It’s take the Republican Party out and set up his brand maybe for the Trump news network.

That’s what all of this is, is establishing the Trump party, the Trump segment of the American voting population, which would also make a very large audience if Trump started a news network, it’s to take out and destroy the GOP. And there’s some people on our side who are saying they wouldn’t be surprised if they found out down the road that this was all part of a conspiracy that Trump hatched with the Clintons years ago.  And when I say years, two years, three years, something like that.  That’s one theory that’s being bandied about.

For example, if he quits now that’s the end of any Trump news network.  There ain’t gonna be loyal people to hang around with him.  If he quits now, he’s destroying every aspect of his potential business future.  I’m just sharing with you things that I hear.  The left has their own theories.  Their popular theory is that Trump knows he’s gonna lose and is so mad that the Republican Party’s throw him overboard that his mission now is not to destroy the Democrats or Hillary, but to destroy the Republican Party.

Now, I think that theory, that’s what they hope happens.  That’s what the Drive-Bys and the Democrats hope is going on.  But it’s all part of the attitude that they’re running around with that it’s in the bag, that it’s over.  But, you know, folks, the polling data doesn’t say this yet.  Even the polling data they cite, the NBC News/Wall Street Journal report poll that shows Hillary up 11, it’s an incomplete three-day poll.  It’s two days in a three-day rolling average.  It is it a very small sample compared to other NBC/Wall Street Journal polls.  The two days it does have are the two intense immediate days following the release of the audio of Trump walking around out there with Billy Bush on the lot at Access Hollywood.

We find out that this particular poll was also conducted by pollsters with direct ties to the Hillary campaign.  Folks, I can honestly tell you that I have never in the 28, 29 years I’ve been doing this, it has never been this intense from a prep standpoint.  In other words, everything I worked on last night and this morning prepping the show, I haven’t gotten to any of it yet because everything is so fluid and happening while the program is on the air that it is a challenge to keep up with it.

Now, the Democrats would say that’s a low number, 75%, it ought to be 99%, ought to be 100% don’t want him to quit.  You think you’ve got a good poll there with 75% of Republicans want to keep Trump on the ballot?  Well, they’re not asking that.  Whether or not Trump should cede the slot to somebody else.  They’re not saying the Republicans ought to quit.  Anyway, this is The Politico Morning Consult poll, and it was conducted the day after the debate, published today.  Clinton 42, Trump 37.  It’s five points.  Gary Johnson, Libertarian party, 10%.  Jill Stein of the Green Party gets 3%.

Gary Johnson, libertarian, 10%?  Come on, folks.  Can we get serious here?  Ten percent for the Libertarian candidate in this, who admits he doesn’t know where anything outside the United States is?  He admits it proudly, happily, ’cause it doesn’t matter, we’re Libertarians, we don’t care about Aleppo.  Aleppo Shleppo.  Doesn’t matter to us.

So, anyway, the point of the polling data is, outside of that NBC/Wall Street Journal poll, which the Drive-Bys are totally hanging their hats on, there isn’t any polling data that shows that Trump got trounced or that people are abandoning Trump in droves after the debate.  Most of the Trump people watching thought that he won that debate, truth be told.

RUSH: Back to the audio sound bites.  This is to illustrate the fact that the Drive-Bys think it’s all over here.  We have a montage here, and this is their NBC poll, NBC/Wall Street Journal, 11-point lead for Hillary.  As far as they’re concerned, that’s it, it’s over. 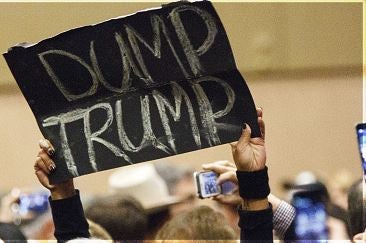 JEFF ZELENY: An unprecedented implosion on the Republican side.

NICOLLE WALLACE: Hillary Clinton is most likely the next president. You know he’s going to lose.

CHARLIE ROSE: This is an unwinnable election by Donald Trump.

CHUCK TODD: The worst may be yet to come with Trump. They may be staring at a total collapse of the party by election day.

F. Chuck Todd is the guy who said the worst may be yet to come.  They may be staring at a total collapse of the party by Election Day.  And Dan Senor, former PR guy in the Green Zone for Paul Bremer in Iraq after we took over there in the Iraq war. Senor was the PR guy for W, Paul Bremer. He was a Bush appointee, now married to Campbell Brown, formerly of the Today Show, Drive-By Media.

ABC’s Good Morning America, George Stephanopoulos, Clinton hack speaking with former Bush campaign aide Matthew Dowd, now an ABC News reporter or analyst or what have you, about Trump’s campaign.  Stephanopoulos says to Matthew Dowd, “We heard from Donald Trump on the stump last night that he’s gonna continue with his scorched-earth approach.”  What scorched-earth approach?  Who is scorching the earth?  Seriously.  Who is scorching the earth in this campaign?

Scorched earth is you destroy everything along the way. You throw napalm out there, you throw a couple of nukes, you just bomb and burn and destroy everything.  Is that what he’s doing?  Anyway, here’s Matthew Dowd reacting to Stephanopoulos’ question about Trump’s scorched-earth.

RUSH:  There it is again, that double-digit, 11 points, that blessed Wall Street Journal/NBC poll.  And now it’s my fault.  Dowd focuses on me.  He and Gerson, I wonder if they’ve got a thing going, ’cause he and Michael Gerson doubled team me, they tag-team me.  When Gerson does it, so does this guy.

And Gerson’s got a piece out, Snerdley found it for me: “What Trump actually did was ensure that hardcore conservatives stay with him until the end of his political journey, when Republicans begin the search for survivors and examine the charred black box. Trump’s performance was perfectly tuned to make a loyal Rush Limbaugh listener burst out in ‘Hell, yeah!’ Put Juanita Broaddrick in the audience? Threaten to jail your opponent? Throw WikiLeaks in her face? Blame her for the death of Capt. Humayun Khan in Iraq? Dismiss all the fuss about sexual predation as locker-room talk?”

Yeah, the Rush Limbaugh Show.  And here comes Matthew Dowd basically saying the same thing on Stephanopoulos today.  So, see, they want to kill two birds with one stone.  They want Trump to go away, and when that happens, they want you to think Trump lost because I was the campaign manager, which of course I am not.

Had I been running the Trump campaign, it wouldn’t have been anything like this.  But nobody asked me.  And I don’t call ’em, I am not gonna call ’em. They got their people chosen. They’ve got people they trust that want to run the campaign.  I wasn’t gonna get within a ten-foot pole of it because I never do.

RUSH: I got an email I checked during the break.  “You said that you would have run a campaign totally different than Trump’s.  What do you mean? What do you mean?”  Well, look, I can’t go into all that, but I’ll give you an example.  Trump got a question at the debate the other night.

“Do you know what the top 1% of taxpayers in America are paying over 50% of all taxes?  Do you know that the top 5% are paying 90%?  So how do…?” I’d argue with the kid.  I would use it as an educational opportunity. Maybe not argue, but I wouldn’t answer it with, “Well, I’m gonna have a policy! I’ll make sure those people start paying their taxes.”  The hell with that!  The middle class are already not paying income taxes.

The bottom 50%, which incorporates a lot of the middle class, does not pay any income tax.  “What are you gonna do to make sure the rich pay their fair share?”  It’s another teachable moment that was lost, and there have been I don’t know how many of these in this campaign where if somebody just had a basic premise and understanding and ability to explain it… Once again — I don’t know — it’s the whole problem of being inarticulate when it comes to a combination of conservatism and knowledge of present-day circumstances.

It’s simply not true that the rich aren’t paying their fair share.  But, look, the rich won’t even defend themselves.  The rich will not even say what I just said.  The rich instead will run around and argue that, “Yeah, you know, you’re right, I’m not paying enough taxes.”  You know why they do it?  ‘Cause it keeps people from knocking on their front door with a pitchfork and demanding half of the silverware.