Have You Seen This Obama Video?

RUSH: “Obama Flaunts Erection to Female Reporters.”  That happened on his campaign plane.  You haven’t heard about this?  Yeah, back 2008, I think during the campaign. Obama stood up, bunch of female reporters on his campaign plane, with an erection.  They got all excited.  They all huddled around to see it.  I’m dead serious.  I’ve got the story.  Hell, who knows what’s true anymore.

But I’ve got the story.  Nobody’s out there denying it that, yeah, Obama was giving the female reporters and the flight attendants a big thrill. And they weren’t shrieking in fear and they weren’t running away and crying. They didn’t act like, oh, my God, Godzilla’s aboard. They all gathered around and wanted to see.  I’ll find it.  I got the story here.  I wasn’t gonna even gonna get to it ’til I see it linked on Drudge, and there’s video of it.  “California Town Now Less Than 10% White.”  “Tim Tebow Saves Man’s Life After Putting Hands On –” I mean, (laughing) there’s no better time to be doing what I’m doing.  Don’t misunderstand.  I’m not complaining.  It’s just astounding, folks. 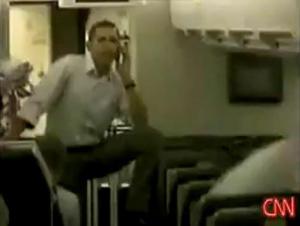 There is a woman standing in the way, and all the other women are telling her, “Sit down! Get out of the way!” so they can all see.  All the women, the reporters on the campaign plane want to see the Obama erection.  Now, we’re being led to believe that this kind of thing is just… I saw a woman break down in tears on Fox yesterday talking about what Trump supposedly said on the audiotape that was reported by NBC or Billy Bush. She literally broke down crying.  Her name was Marjorie something.  She’s a frequent… Well, she’s a frequent guest.

I have no idea who she is, but I see her now and then.  But in the middle of talking she just literally crumbled and started (crying), “We cannot elect this man!” She just… I know you’ve gotta be very careful talking about this, but I’m just saying that here with Obama… Trump didn’t do anything!  He didn’t do anything.  It’s just a bunch of words on an audiotape. By the way, more on that here in a jiffy.