There’s Good News for Trump Out There


RUSH: There’s positive Trump news out there today if you look for it.  Rasmussen Reports says that Trump has taken the lead.  “The full results from Sunday night’s debate are in, and Donald Trump has come from behind to take the lead over Hillary Clinton. The latest Rasmussen Reports White House Watch national telephone and online survey –” And, by the way, this is not a flash poll.

This is a scientific online and phone poll just like SurveyMonkey’s is, and it shows Trump with a 43% level of support and Hillary at 41.  “Yesterday,” same poll, “Clinton still held a four-point 43% to 39% lead over Trump, but that was down from five points on Tuesday and her biggest lead ever of seven points on Monday. … Monday’s survey was the first following the release of an 11-year-old video

of Trump at Access Hollywood with Billy Bush.  All three nights of the latest survey follow Sunday’s debate.”

So here are two polls, SurveyMonkey NBC and Rasmussen, that show Trump either tied or in the lead.  They are given no credence. They are considered by the Drive-Bys to be outliers and kind of freakish, kookish.  “Rasmussen? Come on! That’s a Fox News-simpatico poll anyway,” they say — and, of course, the LA Times still has this nip and tuck.  And the New York Times has a story:

“Stung by a fierce backlash from Donald J. Trump’s ardent supporters, four Republican members of Congress who had made headlines for demanding that Mr. Trump leave the presidential race retreated quietly this week, conceding that they would still probably vote for the man they had excoriated just days before. 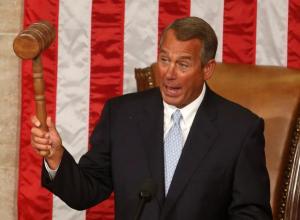 He just said he was gonna vote for Trump because of the Supreme Court.

In other news that you would have to consider good for Trump, this is from KDKA Pittsburgh, CBS Channel 2: “Nearly 100,000 Pennsylvania Democrats have switched to Republican since the beginning of the year. What’s more: The Pennsylvania Republican party says more than 240-thousand new voters have joined the party since last November.” Pennsylvania.  So the news that you would consider upbeat or positive or Trump is there.  There’s not a whole lot of it, but it is there if you can ferret it out and dig it up.