Where Does a 6-Year-Old Learn to Hate Trump?


RUSH:  I need to throw something out to you all, because I do not routinely have 6-year-olds running around in my house.  But I’m watching Angela Rye just now on CNN.  She’s the former executive director of the Congressional Black Caucasians — which is a very, very political organization, the Congressional Black Caucasians.  And she just said, “This election isn’t about right versus left.  It’s about right versus wrong!”  Then she said, “My 6-year-old hates Donald Trump, and, Brooke, we don’t talk politics at my house.”

Michelle Obama’s out there today saying — she almost started crying, too, when she started recounting — that she doesn’t know guys that talk this way. It’s so unacceptable; it’s so foreign.  She grew up in Chicago.  She group in Chicago.  She went to Reverend Wright’s church! (impression)  “Bill, he was riding dirty.”  She must not have been in church that day.  But, look, I just now… (sigh)

I can remember when I was 6. When I was 6 I was petrified of turning seven because of the first grade and having to use paste.  I forget what it was, but I can’t remember if I hated anybody then.  I don’t know that I’ve hated anybody ever. It all seems strange to me. (impression) Well, that’s the point. (sigh)  A kid can pick up anything reflected.  I’m not denying that.  I have a tough time believing that this woman doesn’t talk politics in her house when she’s with the Congressional Black Caucus. 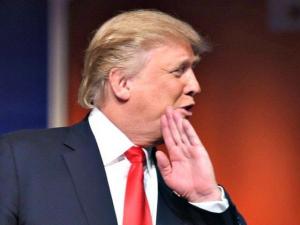 RUSH:  Okay, so I just got an answer that makes sense.  I have mothers emailing me in droves saying their kids learn to hate people at school, kindergarten, pre-K, school, that it would be entirely possible for this 6-year-old to be hearing what a reprobate Trump is from teachers or other kids at school. It would be that easy.  “Remember, Rush, 6-year-olds are not like you are.  They’re not at home.  Their mothers are not raising them, especially ones that run the Congressional Black Caucasians.  They’re out at day care, pre-K, what have you.”

That makes sense.  But this woman was trying to make it look like this kid was watching TV on his own without any outside influences — this was her point — hated Trump.  And that was proof of what a bad guy Trump is.  That was the point that she was trying to convey.