How Should Trump Fight Back?

RUSH: Randy in Carthage, New York.  Randy, great to have you on Open Line Friday.  How are you doing, sir?

CALLER:  I just have a quick question, Rush.  I think it’s disgusting what the Democratic Party and others are saying about Donald Trump.  I’m wondering what’s the number one thing Donald Trump and his campaign can do to turn things around?

She looks like Gisele Bundchen without makeup, just to give you some picture here.  The Washington Post found her, and they did a video, and I guarantee you they’ve got a wind machine blowing her hair, I’m just guaranteeing you they do.  This is a perfectly assembled video that they want you to think took place in the woman’s backyard spontaneously and off the cuff.

When you say, “What can Trump do?” you know, I’ve been accused of a lot of things that are totally false, but nothing along these lines.  And like you, I ask, “What can they do?  What can Trump do?  What can the Trump campaign do?”  Folks, I’ve shared with you the challenge. You know, when I first started this — just a short little story to show you that no matter what you do, you can’t win.  No matter what you do, you’re gonna have people telling you you did the wrong thing.

The first time I was seriously called a racist in the national news media around 1989 or 1990, I had people say, “You can’t let that stand!  If you let that stand, that’s gonna stay with you the rest of your career.  You have got –”  So I said that sounds smart, and I immediately rejected it, said it’s BS, described it as all that, and the response was, “A-ha!  It might be true!  Look how upset Limbaugh is.”  I said, “Ah, geez, I thought you told me this is how I had to get rid of it.”  “Well, I thought it would.”  No, all it did was allowed them to say I was unnerved by the charge and felt the immediate need to refute it, which must mean it’s true.

He’s gotta be uplifting and optimistic.  He has got to continue to stay focused on his issues and talk about what matters and, in the process, look like somebody who could not possibly be capable of all of this debauchery that they’re throwing at him.  When you start denying it in specificity — now, what Trump is doing is saying these allegations are completely false, there’s nothing to it, and that’s fine.  You’ve gotta do that, I guess.  But I think the thing to do is just stay double and triple focused on the reason he’s doing this and why, which is for the American people and for America and present the picture of somebody who is not capable of this.

Let’s look at this videotape of Obama.  We called your attention, it was on the Drudge Report a couple days ago, Obama with an erection parading it around on a campaign plane and all the women trying to get closer and see it.  Not one Republican has spoken up to condemn it.  And so there’s no attention that’s attached itself to it, the story, there’s nothing to it.  And one of the reasons is, Obama, are you kidding me?  He doesn’t look like the kind of guy to run around. There’s an automatic built in, the way his PR and image structuring has been, that people either don’t think it’s possible or don’t think he meant anything by it or don’t even want to think it’s true. 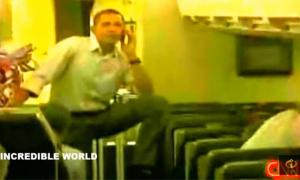 Do you realize if the Republican Party can’t unify around the notion of defeating Hillary Clinton, then it’ll never unify about anything?  What more do you need to create unity than the objective of defeating Hillary Clinton and reclaiming the White House?  And if they can’t even unify around that?  And now Paul Ryan is out saying — grab audio sound bite number 27.  This is Ryan this afternoon at Madison, Wisconsin, University of Wisconsin Madison college Republican event.

RYAN:  We will not just lose our quality of life or our standard of living.  We are at risk of losing the spirit and the initiative that makes America exceptional in the first place.  And if Hillary Clinton wins and if she is given control of Washington, if she is given control of Congress, it will not be long before we come to that precipice.  But that does not have to happen.

RUSH:  Okay, well, how would you interpret that?  The Speaker is suggesting here that we need to elect Republicans to the House to keep the Republican majority, to stop Hillary Clinton.  But for some reason we can’t unify around the idea of keeping her out of the White House.  But we are asked to unify to stop her once she’s there, but we simply cannot unify around the goal and objective of keeping her out of it?  Trump really is on his own here.  He’s got his support group, and he’s got his contingency, his group of people out there that are helping him along, but he’s the focal point.

I really think that what he’s gotta do is just continue to present the image and picture of somebody about whom this couldn’t be true, and the best way to do that is to just laser in on what got him here in the first place. And at the top of that list is illegal immigration, because right there it is.  That issue is the greatest threat to maintaining Western Civilization headquartered in the United States of America where it needs to be.