Trump Octopused Her on Which Plane?

RUSH: Yesterday, ladies and gentlemen, I raised a question when we learned about the woman that Trump said octopused her on the airplane. It turns out her name is Jessica Leeds.  It turns out that she said that after dinner in first class, Trump raised the armrest and moved in for the octopus moves.  I raised a question based on my memory traveling first class. I don’t remember armrests being able to move in first class on the airplane, but I didn’t know.  It’s been a while since I’ve flown first class.

So I asked people out in the audience and I got tons of responses from flight attendants from 30 years ago, 40 years ago, today confirming that armrests in first class did not move.  You couldn’t raise it and get out of it way like you can in coach.  Well, there’s a website out there called Got News, and Snerdley has verified that you can count on Got News now and then.  And Got News has a story that this woman that claims Trump octopused her is making it up.  Jessica Leeds.

She claims, for example, that she was flying a Braniff.  Braniff was an old Texas airline in Houston and Dallas. It was a great airline.  I loved flying Braniff when I was a kid.  She claimed that she was flying Braniff from Dallas to New York, 1979, on a Boeing 707.  When I saw that I said, “Wait a minute. I never saw Braniff fly a 707.”  You know, Boeing 707s have not been in service for a long time. They were so damn noisy. A Boeing 707, if one flew over you… This is the first big so-called jumbo jet.

Those of you old enough to remember will know what I’m talking about, but I didn’t remember Braniff ever even flying 707s in the fleet.  They may have.  Every Braniff I ever saw was a Boeing 727. Well, it turns out that Braniff did not fly 707s from Dallas to New York like Jessica Leeds says she was on, and that was the flight that Trump octopused her.  In fact, we’ve got the old yellowed schedules that you used to be able to buy as published pamphlets. Newark and New York from Dallas?

RUSH: Here’s Ann in Atlanta as we head to the phones.  Great to have you.  I’m glad you called.

CALLER:  How are you? (giggles)

CALLER:  Exactly.  During that time, first class was truly first class.  When you came on board the airplane, from the minute you got on board, a flight attendant was attending to your every single need when you were a passenger.

RUSH:  What kind of aircraft did you fly, Ann, can you recall?

RUSH:  Right, ’cause they were practically out of service then!

CALLER:  Exactly.  Braniff was going out of business at that time, and a lot of those flight attendants came on board with Eastern.

CALLER:  Yeah.  So, I’m very familiar with that time frame and all the airlines that were around and all the different airplanes because you had to be qualified on every single airplane when you’re a flight attendant.  And, oh, by the way, there was a weight restriction. (giggling)  And if you went overweight, you had to leave. (giggling) So, I mean, your appearance as a flight attendant was very, very important.  That’s number one.  Number two: The first class section of the airplane was very private.

And you closed a curtain, and that flight attendant attended… There was a first-class flight attendant that was specific to that cabin, and if it was on a flight… You said that they went from Dallas to New York.  That’s a long flight.  And that flight attendant up there does everything.  They come in the cabin, they give you a drink when you first sit down, they collect your drink, they take it away, they hang your coat up.

RUSH:  Right.  But what about the armrest?  I’m running out of time. 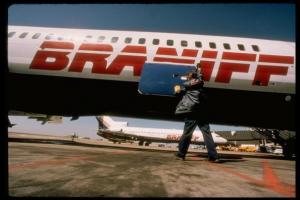 CALLER:  The armrest did not move.  Like I said, I didn’t fly on the 707 but my guess is that was even older than the planes that I was on for Eastern and none of those planes’ arm rests moved.

RUSH:  Oh, this 707 goes back to the 1950s.  I mean, they were the first… It was a real luxury to fly on one when they first entered service.  They were a great airplanes.  They were so damn loud.  But I guarantee the armrest didn’t go up in the first class seats on the 707.

RUSH:  Well, one thing is becoming obvious.  The Democrats — by that, now, I mean the media, too — they’re gonna Bill Cosby Trump.  There are gonna be women coming forward. The Washington Post has now apparently found some woman that was octopused way, way back, whatever, and it’s gonna be a steady stream of ’em.

They think that they’re on to something here now, ’cause all these women who for 30 years — you know, Trump’s been surrounded by a harem.  He’s been surrounded by beautiful women.  He put himself there.  Buys Miss Universe, I mean, why would you do that?  But in all this time, not one allegation.  And Trump’s deep pockets.  Not one allegation.  All of a sudden three weeks out from the presidential election, all of these women supposedly octopused are now coming forward?

Who’s next?  This is Billie.  Billie in Houston.  It’s great to have you on the program.  Hi.

CALLER:  If women haven’t recognized the fact that if this happened to any of them, if anybody reaches around to go up their skirt with their hand, they’re not going to allow it.  They would scream, they would notify the stewardess, they would make a scene, everybody on the plane —

RUSH:  Is it a what the woman claimed that Trump put his — up her skirt?

CALLER:  Yeah.  Why would she sit there and allow him to fondle her or whatever she claimed he did and not make a scene?

RUSH:  You tell me.  You know, you’re the one more qualified to answer this than I.

CALLER:  Well, I can I guarantee you if you happened to me, everybody on the plane would know about it.

RUSH:  At the time it happened?

CALLER:  Don’t you think that that’s an obvious response? If someone reaches across your area and then tries to go up your skirt, you’re gonna sit there?  That’s not something that’s gonna happen unless you allow it.

CALLER:  It couldn’t happen unless it was allowed.  There’s no way.

CALLER:  Exactly.  There’s no question about it.  If she allowed it, if she sat there and allowed it to happen, if it happened, which I doubt very seriously —

RUSH:  Okay, so why is she coming forward now, then?

CALLER:  It’s a deliberate diversion for the Hillary campaign to draw attention away from the email scandal.  I don’t think for a moment that this happened.  No woman would sit there and allow that to happen.  Everybody would know about it.  There’d be documentation.  There would be witnesses.  There would not be all of these years of silence.