A Little Bit of Trump’s Rally in Fletcher, North Carolina


RUSH: Trump in Fletcher, North Carolina, this afternoon.  We have three sound bites from the big rally.

TRUMP: I think we’re gonna have — we have something, we’re so close.  It’s a movement like they’ve never seen in this country before, never, ever seen.  Don’t blow it on November 8th.

RUSH:  I don’t know how many of you watch these rallies.  Fox now and then carries a decent portion.  Sometimes all of them.  But you can watch all of them on YouTube, various channels on the World Wide Web.  Of those of — and I know many of you in this audience watch them — do you wish Trump would go a different direction at times in them or are you satisfied with them?

Here we are, what, 18, 19 days away.  Does it bother you Trump’s still talking about trade deals and China and Japan?  Do you wish Trump would try to move the needle with some other topics, particularly telling people who she is?  I am just asking.  If I were telling you what I thought you would know, I am just asking.  Here’s the next bite from the rally.

TRUMP:  She was given the questions to a debate by Donna Brazile, who is now under pressure to resign.  She should have be.  She should resign.  But I ask you, why didn’t Hillary say, “I can’t do this, I can’t do this. I can’t, I can’t take these questions”?  Nobody from the media is asking that question.  Why didn’t she say, “I’m not allowed to do this?”  Hillary Clinton is the most corrupt politician ever to seek the office of the presidency. 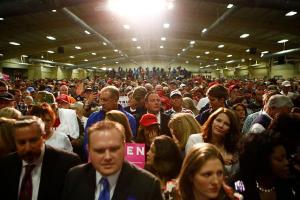 RUSH:  And the third sound bite from the Trump rally today at Fletcher, North Carolina.  There are two other rallies like this the rest of the day, maybe a third.  Maybe a total of four today, but here’s this one.

TRUMP:  It’s time to drain the swamp in Washington, DC.

TRUMP:  I’m going to push for a constitutional amendment to impose term limits on all members of Congress.

TRUMP: Not only will we end government corruption, but we will end economic stagnation.  My plan for the economy can be summed up in three great, beautiful, powerful words:  jobs, jobs, jobs.  They’ve been taken away from us.

RUSH:  Okay.  So those are the three bites from the Trump rally today, Fletcher, North Carolina.  It’s dangerously close to Asheville, which is the equivalent of Moscow on the Hudson in North Carolina.  It’s a toss-up, Asheville and Chapel Hill.  So Trump’s point is he’s gone to the belly of the beast for these rallies.