RUSH: Governor Pence has phoned us and without any further ado, I want to welcome him to the program.  Governor, you’re calling us from your campaign plane, is that right?

PENCE:  I am, Rush.  We just landed in North Carolina, got a great day ahead of us, excited to be putting our head down for the final push, driving toward a great victory for the American people on November the 8th.

RUSH:  Well, since I’ve got you, let me just ask you, the subject today has been, I’ve taken phone calls.  People are confused, Governor, about the polls.  You’ve got two or three polls that show you tied or up one or two, down one or two, but then the big major polls have you down 10, 11, 12.  How are you in the campaign dealing with those polls?  What do you think of them?

PENCE:  Well, you know, I think Abraham Lincoln said believe nothing of what you hear and only half of what you see.

PENCE:  So I do believe what I see.  What I see out on the campaign trail, Donald Trump and I were in Cleveland on Saturday night, a thunderous crowd, 10,000 people.  I was campaigning on my own south of Columbus, Ohio, and you would have been a rock star there, Rush.  It’s called the Pumpkin Show.  It draws about 50,000 people.  I literally got out of the motorcade because we were getting so much applause and so many people cheering. I just jumped out of the car, and the overwhelming support at the Pumpkin Show in Ohio was deeply moving to me.

I mean, people really want change in this country.  And, you know, the polls, I think the Rasmussen polls got us up a couple of points. Nationally, I know in North Carolina where I just landed, I think we’re just down one at this point.  Look, this race is on.  It’s clear to me the national media is trying to build a narrative to support Hillary Clinton by suggesting this thing is all rolled up and nothing could be further from the truth.  I’ve never seen the kind of enthusiasm at the grassroots that I see campaigning with or for Donald Trump.

RUSH:  You know, every time I’ve spoken to you, you’ve commented on that.  It sounds like you are really deriving a lot of the energy and optimism you have from these crowds.

PENCE:  Well, you really are.  And the thing about it is they’re just people from every walk of life.  I mean, you’ll have people that own the little small businesses in small towns.  You’ll have hardworking people, you know, that, you know, from — you know, straight out of a blue-collar background, and they’re all reaching over the crowd, reaching in saying, “Keep fighting, keep going.”

RUSH:  So you’re in North Carolina today.  How many events a day are you trying to squeeze in?

PENCE:  Well, you know, we’ve got a couple rallies today.  I know Donald did three rallies on Saturday, one yesterday in Naples.  I think, you know, what you’re gonna see both of us doing is just taking this case to the American people.  I’ll be in Pennsylvania, I’ll be in Iowa, I’ll be out west in Nevada, in Colorado this week.  Donald I think is in Florida the next day or so, but we’re just gonna do it. You know, my role model in all of this — and Donald Trump and I’ve talked about this — is Harry Truman and his campaign in 1948.  I know you’re a great student of history, but it’s a similar deal.  Remember the Truman and Dewey race, Rush? 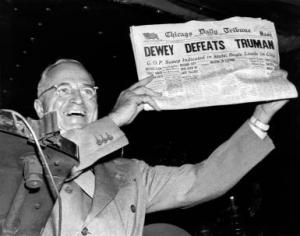 RUSH:  You can cite the same example —

RUSH:  You can cite the same example, Reagan-Carter 1980.

RUSH:  Last poll had Carter up by nine.  Look, time is growing short.

RUSH:  And I’ve got one more question for you.

RUSH:  The media is trying to tell us that it’s over, it’s just so over, that Hillary and her surrogates are now going to red states and campaigning for down-ballot races so the Democrats are not only gonna skunk Trump, but they’re gonna win the House and the Senate back.  What are they really doing, Governor, as they’re out the campaigning in these red states?  What are they doing, in your opinion?

PENCE:  Well, I honestly think it’s all just tactical by Hillary’s team and by her allies in the national media.  You know, there’s two ways you can defeat your opponent, number one, is you can defeat ’em outright, or number two, you can just demoralize them.  I think that’s what they’re trying to do here.  But I don’t think the American people are buying it. 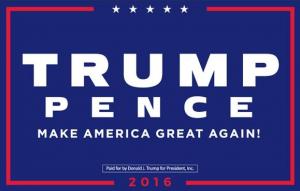 Donald Trump said yesterday in Naples, we have to reelect a Republican House and a Republican Senate so that he can advance and we can move forward that contract with the American voter that he outlined in Gettysburg.  So, you know, anyone within the sound of my voice, I would just tell ’em don’t buy the media spin, don’t buy the Hillary spin.  This race is on, it’s a fight, and it’s to the finish, and we’re gonna keep fighting hard for the American people, not just to elect the Trump-Pence team, but to reelect Republican majorities in the House and Senate so we can move that contract with the American voter and make America great again.

RUSH:  Thank you, Governor Pence, for your time.  I appreciate you thinking of us as you try to squeeze things into your schedule today.  Have a great afternoon, a great rest of the day.

PENCE:  Thanks, Rush.  Appreciate you.