RUSH: Folks, I want you to be very, very aware of something.  I wouldn’t put anything past anybody on the left in this election.  I’m here to tell you, as much as we have talked about it, I don’t think we’ve gotten close to describing and nailing the sheer panic that exists on the left at the thought of losing this.

The United States of America, with its focus on individual freedom and liberty, merit-based achievement, all of that, that has been what has made the United States exceptional and different from practically all other nations in human history on earth.  And if we are to lose that status by virtue of losing an election because the people who will win want to close off those opportunities, want to basically say that America as founded is corrupt, America as founded is unfair, America needs to be transformed — and you know the drill, what the Democrats stand for.

So people on our side have the same attitude about this election that people in the establishment do; but the people in the establishment have much more power, individually and within their group.  They run everything.  And the prospect of losing it, I cannot describe to you the kind of fear and panic it causes.  And that’s why I think all bets are off in terms of what those people would do to hold onto what they’ve got.  It’s human nature.

And I just want to reemphasize this, because there’s still a lot of time, and there’s a lot of tricks that can still be pulled.  What happens, let’s say here’s the Washington Post tracking poll, Hillary’s lost eight points in four days, and they’re all out there making a big deal of it.  I could cite you a lot of other polls where a similar downward trajectory by Mrs. Clinton is taking place.  What happens if the polls on Monday or Tuesday next week show her regaining it all, how are you gonna feel?  You’re gonna say, “Aw, no, oh, no.” 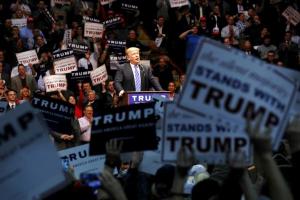 You’re gonna be one measure of angry, another measure of depressed.  And I just want to take the occasion of the program here today again to once again tell you, nobody knows.  It isn’t over.  There are too many factors in this election that do not have enough precedents for there to be accurate projections, predictions, calculations.  That’s primarily because of the presence of Trump.

So let’s deal with what we have today.  If the polls change dramatically and the other way next week, we’ll deal with that if that happens.  Not gonna predict it; I just want to warn you that they will do anything.  “They” — meaning the Democrats and Republicans, the Washington-New York-Boston power corridor — are not going to just sit by and let this happen.  They’re going to do everything they can to influence the outcome.  They have the power to do so.  That’s one of the perks of being in the establishment.

You run the American political system.

You run the government.

It’s a massive, massive undertaking to wrest control from the establishment, from the elites, from the ruling class — and that happening is closer to reality than anybody ever dreamed it would be. Hence all the panic out there, particularly on the Hillary side things.

CALLER:  Rush, thank you so much.  It is an incredible honor.  I homeschool my three children.  We have all of your Rush Revere books.

CALLER:  We’re rereading some of them, and my children just adore them and you, so thank you for everything that you do.

RUSH:  Thank you very, very much.  I really appreciate that.

CALLER:  I wanted to go back to the question that you had at the beginning of the show about the left being on the verge of losing everything potentially; and I think they are.  I believe that WikiLeaks and Project Veritas have given insight to the low-information voters.  Now everybody’s heard of it. Everybody’s either Googled it or caught wind of it somehow, and it’s finally exposing more people to the process leading up to our elections and blowing up the issue of corruption as it relates to Hillary and her campaign.

And they’re seeing that this is one big game and that they’re becoming very wise to it.  Now there’s an expectation that the left is going to work its magic and dig up some kind of dirt.  The women thing I don’t think worked as much as Megyn Kelly wants to continue to stoke that fire.  So now what are they going to do in the next 10 days that is not going to look contrived? Who’s really going to believe whatever it is they’re putting out there? Time’s running out.  These polls are changing every day. But what’s in that wind that’s causing Hillary to be up three points in IDB today?  I just don’t understand.  But I think people are becoming more wise to this, and that’s why I think Trump is really going to clinch it.

RUSH:  Well, we’ll see.  I tell, the WikiLeaks story has finally broken out now — or broken through, depending on terminology — and it’s front page, Washington Post, New York Times.  And the aspect of it that has broken through is the corruption at the Clinton Foundation.  Somehow, the fact that Chelsea Clinton went to Doug Band and said, “Look, I don’t like the way you’re doing this.  You’re making us look like a bunch of hustlers here.”  Which they are.  They always have been.  The Clinton Foundation has always been about hustling donations and payments for Bill and Hillary so they could get rich.  That’s what its purpose was.

Now, I’ll react to some of the other things you said when I come back from the break, which is happening right now, so do not go away.

RUSH: Folks, I’ll tell you one other thing here about all it is.  You know, we talk about them being worried that Trump might not concede if he loses, it could be unprecedented and very damaging to our democracy.

Let me tell you something.  People whose identity, whose standard of living, whose money, whose self-importance, self-image, self-worth is all wrapped up in government, and if they, by losing an election, are forced out of that position, those are the people that you’ve gotta look out for. 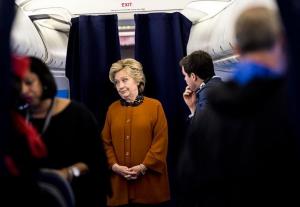 My point here is, the people you really gotta look out for if Hillary loses, it’s not Trump if he loses that’s the problem.  They’re putting out this BS that Trump’s gonna protest. If these people lose, all they gotta do is hire Black Lives Matter and Planned Parenthood and any number of other groups to go out there and raise absolutely holy shmoly hell in the streets on election night and the ensuing days.

I wouldn’t put anything past them, especially if they lose to Trump, an outsider that they have just hated from day one and have let everybody know how much they hate him and they’ve tried to drive him out of the race by getting everybody else to hate him, if this guy actually turns around and wins, oh, you don’t have any idea.