RUSH: Is Trump talking about this?  Trump is.  Let’s JIP Trump.  Trump’s out there in Manchester, New Hampshire, and our microphones are there.  Let’s listen to what he has to say about this.

RUSH: Just a few minutes here.  We don’t have a lot of time.  The crowd is jazzed as you can hear.

TRUMP:  And they are reopening the case —

TRUMP: — into her criminal and illegal conduct that threatens the security of the United States of America.

TRUMP:  Hillary Clinton’s corruption is on a scale we have never seen before.  We must not let her take her criminal scheme into the Oval Office.

TRUMP:  I have great respect for the fact that the FBI and the Department of Justice are now willing to have the courage to right the horrible mistakes that they made.

TRUMP:  This was a grave miscarriage of justice that the American people fully understood.

TRUMP:  And it is everybody’s hope that it is about to be corrected.

RUSH:  Yep.  Not gonna happen before the election, though.  That can’t… They don’t move that fast.

TRUMP:  So that is a big announcement that I heard 10 minutes ago —

TRUMP: — and I guess, obviously, most of you folks have heard about.  And in all fairness, for all of the people that have suffered for doing so much less — including just recently Four-Star General James Cartwright, General Petraeus, and many others — perhaps finally justice will be done.

RUSH:  Donald Trump in Manchester, New Hampshire, here at a rally reacting to the FBI reopening the investigation into Hillary Clinton’s emails.

TRUMP:  With that being said, the rest of my speech is going to be so boring.

RUSH: Trump may have misspoken.  I am not sure.  We don’t know that the DOJ has signed off on this FBI investigation.  The DOJ doesn’t have to sign off.  The FBI can investigate whatever it wants.  The DOJ gets involved when the FBI wants to indict or needs a grand jury.  Now, they do work together, but there’s nothing that says the FBI can’t reopen something or investigate without the DOJ’s approval.  It could well be that Loretta Lynch doesn’t know anything about this.  It could well be.

Paul Krugman of the New York Times — they’re all upset out there on the left.  They’re coming apart out there.  They know what the potential here is, even if nothing happens in this investigation, just the fact that it’s been reopened is a nail in a coffin.  Whether it’s the final nail or not, who knows.  Paul Krugman of the New York Times saying Comey needs to provided full information immediately, otherwise he has clearly made a partisan intervention betraying his office.

See, it was okay when Comey looked the other way. It was okay when Bill Clinton partisan got involved with Loretta Lynch, yes, that was fine and dandy.  But Comey reopening, you can’t do that, not without us knowing what you’re doing, not without us approving, and if you’re going partisan on us, against us, you better let us know.  When Comey’s partisan for them, that’s the way things are supposed to be.  Would you like to hear Wolf Blitzer getting the bad news?  Audio sound bite number 22 this afternoon on CNN.

BLITZER:  Breaking news I want to bring to our viewers right now.  A new possible investigation by the FBI into Hillary Clinton’s emails.  Our justice correspondent, Evan Perez, is joining us now with details.  What are you learning, Evan?

PEREZ:  Well, the FBI director Jim Comey has sent a letter to members of Congress telling them that the FBI is taking a look at another set of emails that it hadn’t previously taken a look at while he was doing its investigation.  This letter that Comey has now sent to members of Congress says that new emails have now come to the attention of the investigative team.  We’re told that the investigators are now going to look to see whether or not these additional emails that have been uncovered contain classified information, as well as whether to assess their importance to this investigation.  Wolf, this means that the investigation which we thought was over with is now back open.  This is another worry for the Clinton campaign, as we come to the closing days before the election.

RUSH:  Yeah.  Folks, it’s all over the WikiLeaks document dump.  Clinton staffers are actually, “What does she think she’s doing?”  This was about the time she was setting up the server.  And Trump has made a point.  Trump tweeted out, “If my staff were talking about me the way Hillary’s people talk about her, I would fire them.”  Meaning what Hillary’s staffers said about need to sober her up at three in the afternoon.  I mean, the things that Hillary’s staff people are saying about her in their emails, it shows fear, but it doesn’t show a lot of respect.

You know what it shows?  It shows a bunch of people who think they’re essentially producers, that they’re running Hillary.  As I read these emails from all these different people that are on Hillary’s team, I get the impression they’re the decision-makers and she’s the robot.  She gets sent out to do this, do that, and when she does things on her own without telling them like this server, they’re bamboozled.

They don’t know what she’s doing and they’re worried.  And then there are emails like it’s the middle of the afternoon, do we need to send somebody up there to sober her up?  For some function that was coming up later that night.  So this has given wild idea that Hillary is a daytime consumer of adult beverages. 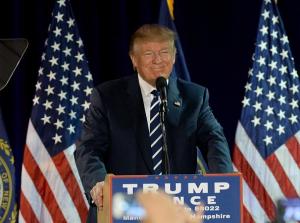 These leaks now, the WikiLeak emails are making the front page of the New York Times, the Washington Post, and they’re becoming lead items with ABC, CBS, and NBC, and I’m telling you it’s because of the foundation and what’s easily understood, the Clintons getting rich off their own charity.  That’s where that is headed.