Hillary Has Nobody to Blame But Herself

I guess none of that was true.  I guess it’s not operative any longer.  They are worried to death on the Hillary side.  They’ve nominated somebody that’s under constant FBI investigation, and there are four different investigations into the Clinton Foundation.  Do not doubt me when I tell you that within the inner circles of the Democrat Party they are very worried about this. Even if she gets elected they’re very worried about it, because of what it portends for her presidency.  This woman is corrupt.  She and her husband are constantly engaged in things that place them under investigation, for 30 years.

Can you imagine those FBI agents in there dealing with Huma and Weiner’s computer?  How many pairs of latex gloves did they have to wear in order to be investigating?  In fact, ladies and gentlemen, our cameras and microphones are everywhere, and we have a behind-the-scenes of the FBI dealing with this very thing.  We’ll get to it later.  I’ll just finish my thought here that the Democrat Party could have nominated anybody, but they stuck with Hillary Clinton because they owed her.  You know the drill on that.

Now, speaking of how things turn around, you remember how up until Friday, Comey was probably the most beloved hero of the news media and the rest of the Democrat Party? And now? Now his name is worse than mud, and a lot of people are reminding us… You know, frankly I had forgotten about this.  I wonder how many of you had forgotten.  In 1992, George H. W. Bush was facing Clinton, and a week before that election, Caspar Weinberger was indicted by Lawrence Walsh, a special prosecutor.

The timing was totally manufactured and totally suspicious, and nothing ever came of it.  But you had a member of the Bush cabinet, Caspar Weinberger, indicted by a Democrat special prosecutor, Lawrence Walsh, and there is no question that that had a tremendous impact on the election.  The Democrats running around saying, “Oh, this is unprecedented! It’s undemocratic. We don’t tamper with elections prior to elections like this!” They did. The Democrats do all this and more. In fact, this is a little bit of tit-for-tat. 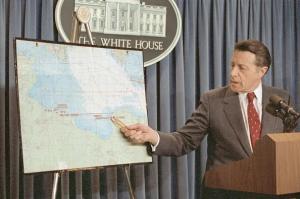 This guy that she was or still, I guess, is married to is just a creep.  This guy you want nowhere near anything serious, and apparently he has as much knowledge of what she’s doing as she does, and this has got to have that campaign in an absolute uproar over how this could have happened.  But instead of her going out and saying, “There’s nothing there. I don’t care what they think they’ve got, Hillary, there’s nothing there,” instead she’s saying, “I don’t know how my emails ended up there.”  The dog ate my homework type of stuff there.  There is something here, has to be, based on Huma’s reaction to it.

RUSH:  No.  It’s very clear to me.  Let me repeat this.  This is the Washington Post headline, and it’s from two days ago: “Clinton Aide Huma Abedin Has Told People She Doesn’t Know How Her Emails Wound up on Her Husband’s Computer.”  Folks, that’s all we need to know that it’s serious.  If there was nothing on her husband’s computer — if these 650,000 e-mails, whatever number of emails, if there’s nothing to see there — Huma Abedin would be telling people, “There’s nothing there.  They can look all they want.

It’s not just to portray Huma as an innocent victim of Carlos Danger.  It’s to remove her intent to commit crimes.  That’s what they’re trying to do.  (stammering) “I — I — I don’t know how it…”  The headline is an admission by the Clinton crime family that what the FBI has is real and just as damning as Comey’s letter implies — and what it could be, I don’t know.  It could be she’s committed perjury.  She told the FBI she had given them everything.  She told the FBI she had destroyed everything.  Now they found who knows what and is her answer, “I got rid of it all!  There’s nothing. I don’t care what they’ve got.  It’s nothing”?

Her answer is, “I don’t know how those emails got on my husband’s computer.”  I know how to read between the lines here.  So we have… Let us take a look at what we’ve got here and look at what the American voter should be made aware of.  We’ve got this deviant, Anthony Weiner, and his unsecured laptop which may have — most likely does have — classified State Department data on it.  This is a guy who’s been sexting with teenage girls. He’s everything from a blackmail risk to just absolute reprobate behavior.

He was communicating with her on what he knew to be an illegal server by using a fake name.  Obama has been reduced to a liar.  This is what happens to people who come in contact with the Clintons.  Nothing good happens to most of them, and Clinton and her illegal behavior has now snared Obama for whatever reason.  Then we’ve got Obamacare, which is just an abject disaster that was also presented with a series of major, serious lies. “If you like your doctor, keep him; like your plan, keep it! Premiums are gonna come down $2,500.”

None of it was true.

Every bit of it has been a giant lie for the sake of getting it passed.

The voters need to know as much as possible about this, and thank goodness Trump is carrying the water on it.