RUSH: Montage of a bunch of people from all over the place — CNN, Washington Post, New York Times, you name it — over the Comey announcement on Friday and what it means.

DON LEMON: This e-mail scandal, is it baked in with voters?

MARK MCKINNON: Most of this is baked into the cake.

PAUL BEGALA: The damage of the e-mails (snickers), that’s all baked in.

KARL ROVE: The people who are for her, already have this baked in.

JUAN WILLIAMS: I think most of this is baked in.

LANHEE CHEN: This is something that I think is relatively baked in.

JOHN DICKERSON: One of the things Democrats have been saying — hoping, praying — is that what they say is that these views are baked in.

LIS SMITH: Right, because this is baked in.

ASHLEY PARKER: A narrative that’s always baked in the cake.

DAVID CHALIAN: Yes! There is a largely baked-in factor.

BRIANNA KEILAR: This sort of goes to what’s already baked in with Hillary Clinton.

EDWARD-ISAAC DOVERE: We’re also at the point where this issue seems to be baked in.

RICK WILSON: I think a lot of them are baked in the cake about how people feel about Hillary Clinton.

If I wanted to maintain any position in the establishment, I wanted to make myself a powerbroker, stay in it, I would still be — ’cause I’m an obedient guy, I’m the mayor of Realville. I would be really alarmed, curious, concerned over the size of these Trump rallies.  It’s undeniable that there is something happening in this country, and these people in the establishment want to act like there’s nothing going on.  “Eh, that doesn’t mean anything, those crowds!  That’s just… That’s just a bunch of people just…”

It means a hell of a lot, and they want to act like they’re unmoved by it.  It’s not natural!  I guarantee you, when your side’s drawing 300 people — or in the case of Tim Kaine, 30 people. When your side can’t sell books, when your side can’t book its cruises, and the other side’s drawing 15,000 people every appearance and three or four times a day, and you look at that and you ignore it or you discard it or you say there’s nothing to it, you are living in sheer, utter denial — and that’s where they are.  “Oh, it’s already baked in! It doesn’t matter.  Hillary’s gonna win.  This is not gonna change anything!”

It’s nothing but wishful thinking from these people.  I mean, this is real, on-the-ground evidence that we have happening in this country.  There is something going on out there.  And Trump is getting better, folks.  I don’t know how many of you have taken my suggestion to actually watch one of these Trump rallies on YouTube or via a Drudge link or wherever you find it.  But for the most part this past week, he was on message, he was from the teleprompter, and he was hitting a ton of different issues.  It wasn’t just NAFTA and trade deals and jobs. 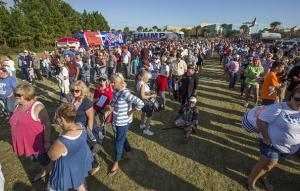 Then when it’s over, you don’t just stream out of there.  You wait around and you talk to other people there ’cause you’ve got 7,000 to 10,000 like-minded souls that you’re meeting and getting to know.  They clear the deck so Trump can get out of there with no hassle, with no traffic.  Then they let everybody else go. So you’ve gotta retrace your steps back to your car. You have to get in the traffic that ensues leaving this event.  It can take hours to show up at a one-and-a-half hour Trump rally.  And people have been doing this three and four times a day for this entire campaign all over the country, doesn’t matter where you go.

And these people, the establishment look at this and say there’s nothing happening there, it’s nothing, it’s just anecdotal.  And the AP can do that story where they found one 29-year-old farmer in Warren County, Ohio, to say that he was voting for Hillary to save the GOP.  Stop and think of that.  A 29-year-old farmer from Warren County said, “I so hate Trump, I’m voting for Hillary to save the GOP.” The AP ran with that, and that one guy, he was a stand-in for millions, they wanted us to believe.

So in that anecdotal case, oh, yeah, we’re supposed to take that one guy and understand that it means and represents tens of thousands of people.  But 15,000 people at a Trump rally, doesn’t mean anything, Rush. You can’t equate people showing up at a rally with voters.  There’s no science there, Rush.  You don’t even know that they’re all gonna vote, much less for who.  But then they turn around and try to tell us that one guy in Ohio stands for, represents a million people.  It’s just absurd.