RUSH: Let’s start at the beginning on this, because what Comey did in the first place is… You can’t put all this in context without going back and looking. It was July 5th, I think it was. I’m not sure about the date, but that’s when Comey announced everything he had found, all the evidence that Hillary Clinton had violated this and violated that and maybe told some distortions here.  She didn’t…

At that point, she had not lied to the FBI, but she may have lied to Congress. She may have lied to the American people, which is not the same as lying in your FBI interview.  So what Comey does, is he comes out and explains what they found, and it was a list of crimes.  And it was comprehensive.  But that was unprecedented.  This hardly ever happened.  When’s the last time you can remember the director of the FBI announcing what he had found in an investigation of anything?  Normally that’s the Department of Justice. That’s the attorney general that announces these things.

You can’t examine why Comey did what he did Friday without going back to the beginning, because once you start making mistakes, you usually continue making them in order to service the first mistakes.  So the first mistake, being honest, was what Comey did in announcing her crimes, listing what would have been an indictment. But then he took the extraordinary step of saying he was recommending that she not be prosecuted because he couldn’t find any intent and no reasonable prosecutor would take this case to court.

And everybody signed off on it.  This was, of course, after Bill Clinton had met on the tarmac with the attorney general, Loretta Lynch.  I mean, everything about this has just been one mistake after another because it’s involving the Clintons, and they corrupt everything that they touch.  So the theories began to Comey… Remember, his reputation going into this is one of unimpeachable integrity.  Everybody that’s ever known James Comey has talked about his character and his integrity and the fact that he’s a straight shooter and doesn’t go partisan one way or the other and is a strict law-and-order guy.

Everybody who’s ever worked with him or knows him said this about him.  Then that whole press conference happens, and there are numerous reactions to it.  But in the grand scheme of things that shouldn’t have happened.  Why did it?  Well, theories abound.  I’ll tell you what mine is: I think that Comey knew that no matter what he recommended, there wasn’t gonna be a prosecution.  Bill Clinton had met with Loretta Lynch.  His boss is Barack Obama.  He knows that they are not going to pursue Hillary Clinton.

When you’ve got the case, you go forward with it.  But this clearly was a case of justice affected by an election and one man, Comey, not wanting to be the guy in history books who took her out.  And that’s what it would be.  And he’s smart enough to know that.  He doesn’t want that for himself.  He may not want that to be the case anyway.  So he reads off this list of irregularities and crimes and whatever.  I think he was laying it out for the American voters.  I think he was actually trying the case not before judge and jury, but before the American voters with that press conference.

I don’t have any idea if that’s true.  It’s just my theory.  I think he cares deeply about this.  I think he finds everything that’s gone on here really problematic, and if it weren’t the Clintons and if it weren’t an election — if it weren’t the fact she’s a Democrat nominee — I think it would have gone an entirely different way.  So he lays it out for the American people.  Well, that causes problems.  Because agents who did the investigation know full well what they’ve got on her.  In addition to whatever he announced, they know full well what they found.

Even granting her immunity, you have to be an agent in the FBI looking at this saying, “What in the Sam Hill is going on?  This is not how we do investigations.  This is not how we work at all.  Why is this woman being called a lawyer for this interview?  Why is she being granted immunity?”  And then, to add insult to injury, the FBI announced that after all this they were gonna destroy the laptop computer of Cheryl Mills and one other person. And when that happened, we’re all scratching our heads: Why in the world are they destroying the laptop?

I hate… I don’t want to use the word “mutiny,” but it’s been used by others. But that there was just discontent and disunity and all kinds of trouble inside the FBI as a result of the first Comey announcement, and then subsequent interviews where Cheryl Mills was granted immunity and then proclaimed a lawyer, when she’s never acted as Hillary’s lawyer — and then her laptop ordered to be destroyed.  So then you get to the Friday Comey announcement.  Look, all of this is speculation. Some of it well informed, by the way, but it’s still speculation.  I don’t know. Nobody really knows.

And the bottom line is: Is it gonna have an impact on the election?  Yes.  That’s the bottom line.  That’s what people want to know.  We’ve dealt with that.  There’s no question that it will.  But it’s still interesting to discuss what happened.  So Comey is dealing… He’s got this… Remember, go back to the first Comey press conference. He’s of impeccable integrity, impeccable character. He has endorsements from everybody who’s ever worked with him that he’s a straight shooter, a straight up guy, not partisan.

Here’s the way the legals work on this.  Let’s say that agents are investigating a perp for bank robbery. So they get a search warrant for the perp’s house to see if they could find the money.  While they’re in there, they find a huge stash of cocaine.  Well, the warrant says they only have right for the money, but if they find the cocaine, the courts and the law say they can seize the cocaine, because they have lawful entry.

Okay.  So, in this case, they’ve got a warrant for Danger’s computer, but they’re looking at what he did with the sexting and with the girls and whatever. And in the process they find that Abedin might have lied through her teeth, that there might be classified State Department U.S. government documents on Weiner’s computer; they don’t have a warrant for that.  They don’t need a warrant to use it, but to keep it totally clean, they go get one, and they got it.  They were issued the warrant.  And you know who forced that to happen?

And now here comes Weiner and they find something on there that’s serious enough at this stage, you talk about impacting an election, you talk about not wanting to run the case on Hillary because she’s the duly elected nominee, what about the pressure they faced here?  It must have been so compelling they had to do this.

Let’s go through it the other way.  Let’s say they ignore this, she gets elected, this investigation’s gonna go on, folks.  They’re not gonna conclude this before the election.  And if they do, that’s a whole ‘nother thing.  I’ve gotta make a note to myself to get back to that because that’s another possibility here that you don’t want to think about.  The odds are they can’t finish this investigation one way or the other before the election, so it’s gonna be ongoing.  So let’s say she wins, and we’ve got a president-elect under serious criminal investigation and many of her support staff.  Not cool.  Not good.  No matter how you slice it.  It’s not good that the Democrat Party’s nominated this woman who has been the subject of an ongoing, legitimate criminal investigation which has even ensnared our dear president and turned him into a liar.

So they look at what they’ve got, they go public, Comey goes out Friday and says (paraphrasing), “We’ve learned additional things.”  The left said, “Wait, what did you learn?”  Comey says, “I haven’t looked at the emails yet, but we’ve got a serious indication that there’s something very, very serious here to find.”  “What is it?”  Well, they look and they found state.gov email addresses on some of the email.  So state.gov and Hillary Clinton dot whatever on Anthony Weiner’s laptop.

Red flag after red flag after red flag.  Because of the potential — we don’t know if it’s really happening, but good authority that agents inside the FBI are just livid and prepared to go public, by the way.  Comey and his sullied reputation, a lot of things have come together here that apparently compelled Mr. Comey to go forward and make the announcement on Friday. 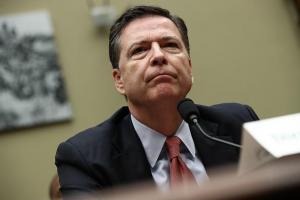 So Comey has revived the investigation because he couldn’t resist mounting pressure inside the FBI by agents.  This is, of course, people who are in there and know.  Those people say the atmosphere inside the FBI has been toxic ever since last July when she was exonerated.  Ed Klein, U.K. Daily Mail, says that Comey told his wife he was depressed by the stack of resignation letters piling up on his desk from agents who were unhappy and didn’t want to keep working there.

He was worried Republicans would accuse him of granting Hillary political favoritism after the presidential election.  He’s facing all these different things.  I think finally what happened was, if you want to know the truth, I think finally what happened to James Comey is that old saying that I paraphrased earlier that “justice knows no clock” has finally prevailed here.

So the question, will it affect the election?  Hell, yes.  We don’t know how much, and we don’t know to what end, but hell, yes, it’s gonna.  You only have to look at Democrat reaction to this to know that.