Hillary Screeches Into the Home Stretch

RUSH: I want to go to some sound bites here.  This is Hillary Clinton.  These are from Dade City, Florida, yesterday.  Still obsessed with what she’s been doing the past 30 years.  This is the point that I made.  Hillary Clinton’s been around for 30 years, what does she have to show for it?  She’s still complaining about the same things, claiming to fix the same things.  Thirty years and nothing been fixed.  She hasn’t improved anything.  Trump picked up on that point.  She addressed it yesterday.

HILLARY:  Donald Trump always used to say, “Oh, what have you been doing for 30 years?” And I always found that kind of odd because you could Google it and find out.  And, you know, I’ve been a lawyer and I’ve been a First Lady and I’ve been a senator and I’ve been secretary of state, and —

HILLARY:  And when I think about what we now know about Donald Trump and what he’s been doing for 30 years, he sure has spent a lot of time demeaning, degrading, insulting, and assaulting women.

RUSH:  That’s all she’s got left in her tank.  That’s it.  And those 30 years, those aren’t accomplishments.  Those are states of being.  She hadn’t accomplished anything.  This has been my point all along.  What has she done?  She hasn’t done anything!  And if you’re a child in the womb in this country she’s not doing anything for you.  This woman cares so deeply about our nation’s children, not if you’re in the womb, then she is one of your biggest threats.  Here she is last night in Ft. Lauderdale.

HILLARY:  I love this country.  I think we already are great.  Now, I think we can be greater.

HILLARY:  And, you know, I am sick and tired of the negative, dark, divisive dangerous vision and behavior of people who support Donald Trump.

HILLARY:  It is time for us to say no, we are not going to backwards, we’re going forward into a brighter future.

RUSH:  Holy cow, folks, she’s screeching, “I am tired of,” what does this remind you of?

HILLARY 2003 (screeching): I am sick and tired of people who say that if you debate and you disagree with this administration, somehow you’re not patriotic, and we should stand up and say, “WE ARE AMERICANS AND WE HAVE A RIGHT TO DEBATE AND DISAGREE WITH ANY ADMINISTRATION!” 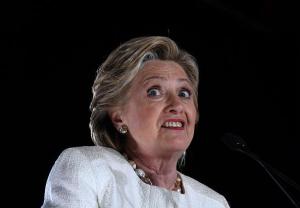 It is insidious. It destroys human dreams, it destroys human potential — and the Democrat Party, it is their playbook, and it is one of the most frustrating things in the world for me to see so many people fall for it.  It has been one of the most frustrating things all of my career, particularly when I see young people falling for it. When I see young people thinking you can’t do anything in this world without government being involved in it, I just… I almost cry.  I really do.  I read what young people write and what they think.

How does somebody leave the White House penniless and 10 years later have a net worth of $350 million when all they’ve done is give speeches? How does this happen?  How does somebody…? How does a man and wife set up a foundation ostensibly for the purposes of setting up charities that help impoverished people all over the world…? How do you get rich doing that?  Charities are supposed to give their money away to people in need.  How do the people running the charity get rich?  But the Clintons have found a way.

And neither of them have had jobs since they left the White House.  Well, Hillary was secretary of state, but that doesn’t pay anything. What does that pay, 200 grand a year?  What does a secretary of state get?  It’s not enough to acquire a net worth of $350 million to $400 million, I can tell you that.  And nobody questions it.  “The Clintons are good people. They’re nice people. They care about people.”  Nah, they don’t care about anybody but themselves.