Panic Sets In for Democrats, Drive-Bys

RUSH: We have panic starting to set in in the Democrat Party and in the Drive-By Media.  President Obama is out claiming that people not voting for Hillary, men not voting for Hillary, is due to sexism and that men need to try to get past that.  Well, what was it when men didn’t vote for her in 2008 when he opposed her in the primary on the Democrat side?  Was it sexism then, that men didn’t vote for Hillary back in 2008?

We also have polling data that is throwing things upside down.  Here’s one of the biggest reveals in polling data today.  We come to find out that — and we mentioned this yesterday — as evidenced by early voting and other research, black turnout, projected black turnout for Hillary Clinton is way down.  The enthusiasm African-American voters are showing for Hillary is nowhere near what it was for Obama in either 2008 or 2012.

One of the reasons why the polls are tightening is because that projected turnout, African-American turnout, has been way amplified beyond what current research shows it will be.  Now, that could change between now and Election Day.  I’m just giving you the snapshot as of today.  In the ABC tracking poll and in the Investor’s Business Daily poll there is a stunning bit of information.  The Washington Post/ABC tracking poll, Trump and Hillary are basically tied.  Trump I think is up one or Hillary’s up one.

And also in the ABC poll — and this has the media freaking and this has the Democrats freaking — Trump is winning big with women, white women who do not have college degrees.  That’s a group that turned out in massive numbers for Ronaldus Magnus in 1980.  The media is stunned because their belief is that Hillary is gonna walk away with every female demographic group. College educated, not college educated, you name it. Trump is winning big with that subset of female voters.  That was not factored, as well.

In fact, in the Investor’s Business Daily/TIPP poll, the headline is: “Trump’s Women Problem Appears to Have Disappeared.”  I think all of this is why Hillary went out yesterday and started screeching about how terrible Trump was with women.  And do you know who introduced her?  She’s brought back Alicia Machado! Three weeks — three weeks — since that news was made, and she’s gone back to the well with Alicia Machado.  I think the Hillary tank is empty.  I think they’ve run out of things to say.  I think all they’ve got is that Trump is a misogynist reprobate.

And they’re panicking because they see women — certain demographic groups of women — flocking to Trump now.  I think women are maybe seeing the difference here between crude comments and compromised national security and dishonesty, what have you.  Now, “That’s not to say…” This is a quote from the Investor’s Business Daily poll: “That’s not to say there isn’t a gender gap — there’s still a big one. But Trump’s support among women has improved 5 points in the past three days in the wake of the FBI’s stunning announcement that it is looking into a fresh batch of emails relating to Hillary…”

RUSH: Look, I know the George Will comment, the Republican Party is never gonna win the presidency unless it gets right with Hispanics and other minorities.  It’s a Chamber of Commerce bromide, Chamber of Commerce run now by pretty much leftists and so forth.  I think this is all gonna be stood on its head if Trump wins this thing.

Look, we’ve got evidence as part of the show prep I have here, Hillary is not generating interest in the African-American population anywhere near Obama.

The key thing about this as I mentioned in the first hour, all of these polls that all year have been projecting Hillary at 10 points, eight points, 11 points, 12 points, whatever, they’ve all made an assumption, and that is that the black vote is going to show up in the same number and with the same enthusiasm as it showed up for Obama in 2008, 2012.

Well, there’s a lot data to suggest now that that’s not the case, and Democrats know it and the Clinton campaign know it and they’re panicking over it in certain sectors.  The early voting, it’s not turning out that way at all.  In Florida, things are upside down right now.  In addition to that, Trump is doing much better with certain demographics of women than anybody projected or thought.

We are learning here that so much of the polling samples that we get, the poll results are based on historical precedent that are being projected to current day, such as the African-American turnout for Democrats.  There are assumptions made that it’s always gonna be there.

Let me go into more of the polling data just to illustrate.  Let me review, in fact, starting with the Investor’s Business Daily and TIPP poll.  “Trump’s Women Problem Appears To Have Disappeared.” Now, they make the point here that there still is a gender gap, and a big one, but Trump’s support among women has improved five points the past three days in the wake of the FBI’s stunning announcement that it’s looking into a fresh batch.

There’s another poll that shows Trump’s support with white women, non-college educated, is just skyrocketing.  It’s a demographic that came out in droves for Reagan in 1980.  A new poll has Clinton 45, Trump 44 in Michigan.  Now, Clinton was up as much as 13 points over Trump in Michigan just a few weeks ago, and she’s in Michigan.  She’s been spending time in all of these blue states.

Michigan is considered the birthplace of the phenomenon known as Reagan Democrats, after working class whites began to abandon the Democrat Party in Michigan starting in the mid-sixties.  They rejected the anti-war left and the rising liberal wing, ended up supporting Republicans.  But in 1992 they went back home, so to speak, the Reagan Democrats went back to Bill Clinton and pretty much haven’t supported a Republican nominee since.  But it looks like it’s starting to shift here, particularly in Michigan.

Washington Post:  Clinton 46, Trump 46, and it is in this poll that Trump is cleaning up with white women that are not college graduates.  And it’s got the media buzzing ’cause nobody expected this.  Also in the Washington Post/ABC poll, Trump has opened an eight-point edge on honesty, even though the race remains tied overall.  And in the midst of all this, the media, according to a story here in the Washington Examiner, the media fear an FBI bombshell is going to hand the election to Trump.

RUSH: More polling data from Reuters.  “Low gas prices and President Barack Obama’s high approval ratings are key factors that favor Democrat Hillary Clinton winning the White House in next week’s election, according to a model from Moody’s Analytics that has accurately predicted the last nine US presidential contests. Clinton is forecast to pick up 332 Electoral College votes against 206 for Republican Donald Trump,” according to Moody’s.  It’s a projection based on economics.  And they are projecting a win for Hillary based on economics.

The economy is humming, and everybody is gonna vote to keep it humming and to keep it going, and that means they’re gonna vote for Hillary.  So that’s the Moody’s report.  However, it’s contradicted in other places you look.  This is from Real Clear Politics: “Dem Strategist: Clinton Should Be in ‘Panic Mode’ Over Enthusiasm Gap With Black Voters, ‘Nothing She Can Do Now.'” Calypso Louie Farrakhan, Louie Farrakhan’s out there saying that Hillary Clinton is Hitler to black people.  Now, think what you want of Calypso Louie, but he’s got people that follow him.

He’s got African-Americans that treat him as the gospel.  He’s out there saying that Hillary Clinton is the same as Hitler when it comes to black people.  “Leslie Wimes, the president of the Democratic African-American women’s caucus, joins MSNBC … to discuss the Clinton campaign being in “panic mode” about low voter enthusiasm in the black community. … ‘It’s over now as far as the African-American community is concerned. She had time back then to get into the community and get people out to vote.

“Now, you know, the numbers are the numbers. There’s nothing she can do now. … What I said before is she didn’t have the luxury of being Barack Obama. We are not as enthusiastic about seeing the first woman president as we were about seeing the first African-American” be elected president. Then from the Daily Caller: “Pollsters Claim Blacks More Excited About Hillary Than They Ever Were for Obama,” a contradictory bit of information.  Democrats on MSNBC are saying she’s lagging far behind in black turnout.

But a poll here, Times-Picayune poll. There’s a bunch of them that are being amalgamated here that indicate blacks are “more excited about Hillary than they were for Obama.”  What Hillary is doing and where she’s campaigning doesn’t bear that out.  So again, you boil it down, and nobody knows.  It’s just… But it does appear that there is significant momentum on the Trump side. 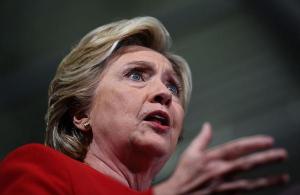 BROWNSTEIN:  In that ABC/Washington Post tracking poll, Donald Trump is leading not only among non-college white men, but among non-college white women by more than Ronald Reagan did against Walter Mondale.  Now, if that’s real, it would be an historic kind of statement, and it would make it very hard for Hillary Clinton in Ohio and Iowa and probably make Michigan and Wisconsin wobbling a little bit, too.

RUSH:  I wanted you to hear that from the actual Drive-Bys, not just me, because this is one of these areas that if you listen to them, “Women hate Trump,” they tell you. “Women don’t want anything to do with Trump, ew!  Women look at Trump and say, ‘Ew!'”  Hillary is still out there using Alicia Machado to introduce her!  Alicia Machado!  Three-week-old news!  It’s empty in the Hillary tank, and Brownstein points out: You look; it’s not just white men.

Trump is getting non-college white women in greater numbers than Reagan did against Mondull.  That was a 49-state landslide against Mondull.  And he said if that’s real, that’s historic. That’s Ohio, Iowa, Michigan, Wisconsin.  Then you put Obama in North Carolina where they’re being told that Trump’s gonna end Medicaid on day one and then dig up Michelle’s garden?  I don’t know, folks.  It’s risky to make these assessments and create false impressions, but I just… I don’t know.  To me, this all reeks of some degree of panic out there on the part of the Hillary campaign.