RUSH: They’re clearly panicking on the Hillary side.  Hillary’s clearly panicked.  She still can’t draw crowds.  Obama’s drawing crowds; she can’t.  Tim Kaine had something like 20 people at a rally somewhere, wherever he was yesterday.

This is another thing. There’s literally no evidence of any energy for Hillary Clinton. None.  Wherever she goes and wherever Kaine goes, there’s no evidence of any energy for her.  There is when Obama shows up.  But he’s president.  He’s naturally gonna draw a crowd no matter what.  She does not.  Trump, you cannot have an arena big enough to get everybody in that wants to see him.  And they tell us, “That doesn’t matter! That’s all anecdotal. That doesn’t mean anything, Rush.  You can’t judge that because it’s not scientific.

So they can take one voter and take his experiences and extrapolate that and expand that to mean what a whole state’s gonna do, but 17,000 people showing up to see Trump? “There’s nothing to learn there! There’s no indication there. You can’t see anything. There’s nothing really to put your fingers on that. Don’t get your hopes up, folks.” That’s what they try to tell you.  “Ted Cruz to Campaign with Gov. Mike Pence for Trump-Pence Ticket in Iowa, Michigan.”

“Mitch McConnell has made his strongest statement yet on his party’s presidential nominee, telling a rally in his home state Wednesday that ‘we need a new president, Donald Trump, to be the most powerful Republican in America.'” That is not what Mitch McConnell… Mitch McConnell hasn’t got anywhere close to saying anything like that at all in this entire campaign.  So I’m asking you: What’s going on with this?  Let me present to you some possibilities.

Mitch McConnell’s looking at the tea leaves.  “You know what?  This guy Trump, he could win!  And if he wins, I want to be on the train.  You know, I want to be in the light.”  If Trump were gonna lose, if the polling data were such that all these Republicans thought Trump was gonna lose, would they be getting on board today or yesterday?  I don’t think so.  Now, you might say but, “Rush, he’s gotta do something. 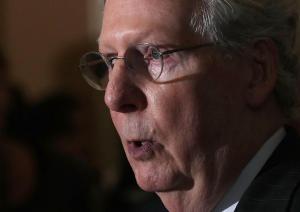 They were all thinking and hoping that Trump would be down 10 by now and that it would effectively be over and that they could already be running around saying, “I told you so.  See, you guys, you should have listened to us. This guy was never gonna work, damaging the Republican Party, damaging the conservative movement.”  Well, they can’t say that now because it is out there that she could lose.  It is out there.  It’s being considered that she could lose.  Not everywhere, but in a number of places.  So it’s still an open possibility.  And maybe McConnell is one of those.  We’ll find out.

“Republican Voters Coming Home to Trump.”  This is TheHill.com.  “Republican voters are finally coming home to Donald Trump after months of flagging support threatened to put the White House out of reach.”

“Independents Leaning Toward Trump in Polls After FBI Furor Erupts.”  This is David Lightman at McClatchy news in Florida.  A new CNN/ORC survey of Florida voters had Clinton up two.  Quinnipiac had her up one.  Trump was leading among independent voters 46 to 40, according to Quinnipiac.  In Pennsylvania, Quinnipiac gives Clinton a four-point edge.  CNN had her up five.  Clinton was ahead by four with Independent voters, Quinnipiac says.

I had somebody ask me the other day, it was Snerdley, said, “Rush, I wonder what happened in North Carolina.  Why in the world is North Carolina even a possibility for the Democrats?”  I said it’s because of all the New Yorkers who have fled New York, the Northeasterners who have fled their liberal Northeastern enclaves and have relocated to Southern states, including North Carolina, and they’re in the process of screwing them up just like they screwed up the northeastern states they had to leave.  High property tax, high income tax, no jobs, so they flee and they take everything they believe that led to all that to these Southern states.

North Carolinians will tell you it’s the Yankee invasion that’s causing this.  The problem is when they move, they don’t adapt.  They bring their liberalism with them.  And so that’s why North Carolina is said to be in play.

Pat Caddell, Jimmy Carter pollster, 1980, says Hillary’s camp has a look of desperation.  Every single issue now favors Trump.  Says he senses a look of desperation about trying to prop her up, coming from the Hillary campaign.  I tell you, folks, they tell us we can’t go by this, but she literally doesn’t create any excitement wherever she goes.  She still isn’t drawing crowds.  It does appear that she’s being propped up in these places.

And the media, which is obviously on her side and in her corner, is reporting and telling stories along the lines of it’s over, it’s a landslide, Hillary Clinton’s already elected, they’re planning the inauguration parties. All these stories are out there and they’re designed to suppress, depress, and otherwise confuse people into thinking that if they oppose Hillary they have no hope.  It’s a common tactic.

CALLER:  I believe we can get the conservatives who refuse to vote for Trump to change their minds, and I’d like to briefly explain that, but I explain it in detail on my website libertysam.com.  But the big mistake they make is by asking the wrong question, which is, “Who shall we vote for, Hillary Clinton or Donald Trump?” And it’s the wrong question because we’re not choosing between two candidates, but between two futures for our nation.

CALLER:  Refuse to vote, yeah, and the reason is, Rush — sorry for interrupting you.  The right question is whether Hillary Clinton or Donald Trump is impeachable.  Now, we know Hillary Clinton has an impenetrable bubble cast around her.  As you a while ago mentioned, nobody wants to go down in history as the one who had impeached or even resisted the first black or female president.  And that paralyzed the Republicans for years, and they bank on that paralyzing affect the future.

RUSH:  Nico, here’s the thing, and I’m sadly running out of time here.  I think, I can’t prove this, but I think one of the plans the Never Trumpers have if he wins is to impeach him, Nico.  Remind me spend more time on this tomorrow, the whole psychology of the Never Trumpers.  People need to understand this.  Nobody better than me to explain it.