RUSH: Now, on this program yesterday, bouncing off a column by Andy McCarthy… Yesterday’s program was one for the ages, and what happened after this program on Fox News last night expanding it, providing detail…

I mean, this is bombshell stuff that happened yesterday in this campaign and in this country.  It’s bombshell stuff, and you will not find a syllable of it anywhere in the mainstream media.  It started with McCarthy’s column yesterday: “The Clinton Emails Are Critical to the Clinton Foundation Investigation.”  What we have learned, ladies and gentlemen, is that the Clinton Foundation is actually the focus.  There are two FBI investigations. They are running in tandem, and they should have been one investigation from the get-go.

But we didn’t know until recently — like this week or late last week — that there was a serious investigation of the Clinton Foundation.  We were of the opinion that the investigation into her email server had bled over and had caused attention to be focused on the foundation.  But, no. The foundation is its own investigation, and for specific pay-for-play reasons. Have the Clintons been selling United States foreign policy? Have the Clintons been engaging in pay-for-play? Meaning: You pay them and they’ll play ball with you by giving you policy considerations or what have you.

The reason she set up the server in her basement was specific, and it was to be able to conduct business for the foundation and keep those emails from ever being seen by anybody, including Freedom of Information Act requests.  And what the Clintons have been doing via their foundation is where the real criminality is.  There’s negligence and intent over on the email server side with classified data being trafficked and so forth. But over here at the foundation, that is where the Clintons have been engaging…

Rudy Giuliani said that if their name were Italian, they would have already been indicted because what they’ve got going there is essentially a Mafia-type operation, certainly a RICO, racketeering and organized crime-type operation.  So after spending some time yesterday detailing all of this and explaining why the foundation investigation is the real key — and then explaining that the foundation investigation is being stonewalled. There are two different offices conducting these two investigations.

The FBI agents that have been conducting this investigation… These two investigations ended up bleeding together, and the agents discovered this and have been asking for further ammunition and permission, and the Justice Department — Loretta Lynch — has been stonewalling the investigation into the Clinton Foundation.  And again the foundation is the reason why the server was set up in her basement.  Now, what was going on?  What is pay-for-play?  Essentially it is how the Clintons got rich.  You set up a charitable foundation…

Remember, now, the Clintons leave Washington in 2000, by Hillary’s estimation, “broke.”  They were broke.  She has offered that as an explanation for why she had to behave in certain ways.  They had to earn some money.  They left the White House broke.  They even stole some furniture from the White House on the way out.  The real purpose of the foundation was to help rebuild Bill Clinton’s image from the Lewinsky days. You set up a charity, do good works around the world, recapture an image and a reputation.

But it was also a way to get personally rich. Within the umbrella of the Clinton Foundation, you have the Clinton Global Initiative, and they hit donors up all over the world.  They hit governments up. They hit wealthy individuals from all over the world up, and they were soliciting these donations for their foundation and soliciting being hired personally to give speeches, to be consultants to companies.  And this is how you go from the White House broke to now having a net worth of $350 million plus.

Having done what?  Set up a charity.

Who sets up a charity and gets rich?  Charities give money away.  But it hasn’t worked out that way with the Clintons.  Anyway, these investigations have been going on all this time while we’ve been distracted. Not distracted. But while we’ve been focused on the classified data and perhaps national security violations, what’s really been going on is Hillary Clinton leveraging her position as secretary of state to engender and get donations to their foundation and personal payments to both Bill and Hillary for speech making or to be hired as consultants or what have you.

So as secretary of state Mrs. Clinton — and, by the way, I’m sure as they’re soliciting donations for the foundation while she’s secretary. They’re also concluding she might be president someday.  So they are essentially offering the foreign policy of the United States or other considerations to donors to their foundation.  And this is what has been learned.  So after spending quite a bit of time on this yesterday, I get home last night, turn on Fox News to watch Special Report with Bret Baier, and it was astounding. 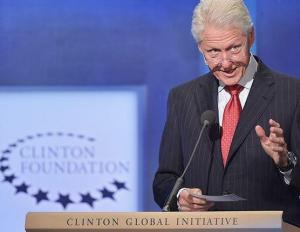 The FBI agents are, I think, hell-bent on having people find out what they have known, what they’ve learned.  They tried to do all they could for a year or more internally but were met with roadblock after roadblock after roadblock from the Department of Justice.  They were left with no option but than to start leaking out all of this information that they have accrued during the investigation of both the foundation and Hillary’s email server in the basement, which is essentially the same thing.

And is seems to me that they decided to get hold of Bret Baier at Fox News and tell him everything that they knew, and he began his reporting on this last night.  And here’s how he… Well, gotta take a break here.  I just saw the clock.  Gotta take a break.  But it’s astounding.  Folks, it’s just astounding, and it exists in a cocoon universe.  It is the evidence of corruption. It’s how the establishment works to protect itself; it’s insider-versus-outsider, elite-versus-not. Everything is wrapped up in this, and half the country or more is not gonna find out about it.

RUSH:  And here’s how Bret Baier began his report last night on Special Report.  He’s also On the Record with Brit Hume.  This is a summation of what he had.

BAIER:  The Clinton Foundation investigation is far more expansive than anybody has reported.  It was believed that the laptops that they had, after a narrow review for classification emails, were going to be destroyed by the FBI.  We have been told that those definitively have not been destroyed.  The Clinton Foundation investigation is so expansive they have interviewed and re-interviewed many people.  They described the evidence that they have as, quote, “a lot of it,” and there is an avalanche coming every day with WikiLeaks and the new emails.  They are, quote, “actively and aggressively pursuing this case.”

RUSH:  And they are being slow walked — Andy McCarthy referred to this in his column a couple days ago, that the DOJ, attorney general slow walking the investigation, trying to impede it, actually, but they are interviewing people.  They granted certain people immunity here, like Cheryl Mills and Heather Samuelson.  They have discovered, folks, that some of people granted immunity have been lying.  You do not lie when you get immunity.

The immunity is in the process of being pulled and I’m told that there are people they’re talking to that are preparing to rat out major players in this investigation because it’s getting to the point where you tell what you know to save yourself.  It’s that serious.  This is not about emails.  People say, “I’m sick and tired of hearing about emails.”  It’s not about emails, folks.  It’s about corruption at the highest levels of our government for all kinds of reasons, including personal enrichment by the Clintons.

RUSH: We’ll start in Alexandria, Virginia.  This is Sean.  Great to have you, sir.  Hi.

RUSH:  Yeah, that’s exactly right, and it’s exactly why Obama today and Hillary every day are out campaigning on the premise that Trump is unfit and he’s unqualified, and they do it on the basis of his character and his personality.  And yet everything Obama and Hillary have been in charge of, nobody can say it’s going great, and nobody can say they want more of it.  We’re having an absolute health care disaster, health insurance disaster.  We’re in a foreign policy disaster.  That’s continuing to unfold.  The economy is no great shakes.

You’re right; Trump’s fingerprints aren’t on any of it.  I think it’s one of the reasons/explanations why they really don’t know how to campaign against somebody like this.  I mean, it’s easy to besmirch somebody who’s been in politics.  You can lie about ’em and blame this or that political event on them, but Trump’s fingerprints are on nothing.  Whatever is going wrong in the country, you cannot blame Donald Trump for it.  To me, this is another reason why Hillary ought not even be close.  So we’ll see how it manifests.  But you got a great observation there.

RUSH: Now, as to the FBI investigation, I want to get back to this because I think it’s crucial for people to understand.  The president’s doing his best to deflect attention away from it.  The Democrats are treating it as though there’s nothing to see here, and yet it’s monumental.  It is profound.  I just want to make one thing, trying to make the complex understandable, as clear as I can.

Now, why didn’t she want anybody to know what she was doing?  Well, it turns out that what she didn’t want anybody knowing was how she and her husband were soliciting donations for their foundation, the Clinton Foundation.  That’s what she was protecting.  The entire reason for that server in her basement was not for convenience, not because she didn’t want to go to the trouble of logging on to the State Department server, not because she wanted more privacy.

It was to hide activity that she knew if anybody found out about she would be in deep trouble, both politically and legally, because what she has been doing, along with her husband, is soliciting donations from foreign governments, foreign entities, foreign individuals, wealthy.  She’s been selling.  What does she have to sell?  She’s secretary of state.  She has access to government policy to sell.  And that’s what she’s been selling. 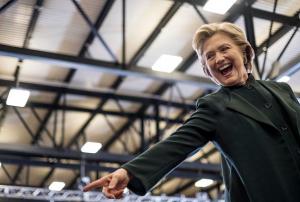 One other little bit of information before we have to be go break — not enough time for a call here, and there’s nobody up there that I see I want to be unfair with in terms of limited time.  So we’ll get back to the phone calls after the the bottom-of-the-hour break.

Bret Baier Fox News reported last night the Clinton Foundation investigation far more expansive than anybody has reported so far, has been going on for more than a year.  Remember we heard the laptop Cheryl Mills, who’s a Clinton Hillary aide — you want to hear something really odd?  She was allowed to sit in on Hillary’s official FBI interview, and they gave her limited immunity after letting her pretend to be Hillary’s lawyer!  She’s not a lawyer.  She’s an aide.  She’s a staffer.  She is a lawyer, but she’s never been hired by Hillary as a lawyer.  But that gave her attorney-client privilege.

Anyway, they seized her laptop along with one by Heather Samuelson, and the news was that they got the evidence they wanted, limited, and then they destroyed the laptops.  Agents did not destroy them.  They were livid that they were forced to destroy them and didn’t, and they have been using those laptops in gaining evidence.