We Find Ourselves in a Familiar Situation


RUSH:  And we find ourselves in that all too familiar situation.  Amazing how history repeats.  Greetings, folks.  How are you?  It’s great to have you here with us on yet another excursion into broadcast excellence hosted by me, your guiding light, Rush Limbaugh here behind the Golden EIB Microphone for yet another three-hour extravaganza.  The telephone number if you want to appear on the program is 800-282-2882.  The email address, ElRushbo@eibnet.us.

It’s amazing the way things work out.  My first comment is we find ourselves in a usual position.  During the nineties we had Bill Clinton who was misleading and lying to the American people practically all the time about matters of substance.  But because he’s the president, people believe him, people believe the president.  It’s in the book, it’s in the cards. 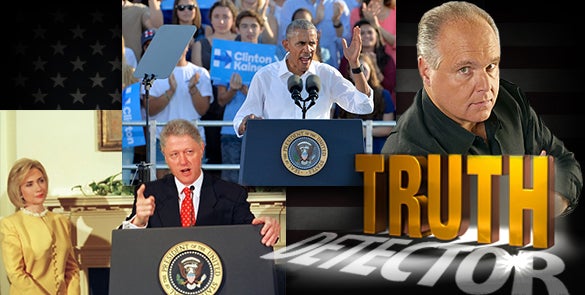 And who are we?  We have clear evidence and news that we have corruption out the wazoo, including in the White House, not just the State Department, and the president of the United States is out, he’s doing right now a campaign appearance, just wrapped it up, I guess in Florida for Hillary, and it is filled with things that are not true, they just simply are not true.  But he’s the president, and the president, the office of the presidency still has amazing respect, and people, particularly young people — and that’s who the audience was for his appearance today — they believe it.

Now, I’ll give you an example.  Obama yesterday and today is saying that the Department of Justice does not act on innuendo and rumors, and that’s all this is.  And so the Department of Justice is who’s wrong here.  The FBI is who is wrong here. James Comey is wrong.  Everybody looking into the Clinton Foundation, everybody looking into the Clinton private email server, they’re wrong.

Obama says this is nothing more than innuendo and rumor, and we don’t act on that, as a nation, he’s saying. (imitating Obama) “That’s not who we are.  We don’t do that.”  Obama pronounced Hillary innocent of all wrongdoing regarding her server.  Remember that?  When he said she was just careless, that she had no evil intent.  Now Obama is signaling that the FBI should not be investigating the foundation or the private server because all of this is just innuendo and rumor, and that’s all it’s based on.

And so when he says it, we find ourselves on the outside looking in, and there’s no way, folks, there’s simply no way even all of us on this so-called side of the media aisle, there’s no way all of us can compete with the revered and with respected office of the presidency.  And yet we must.  We must plod on on this program because President Obama is not telling anybody the truth about this.

It gets maddening, it gets frustrating, and any other number of adjectives to describe what’s happening here.  This is the architect of Obamacare, which is destroying the health care system in this country and the insurance system in this country.  A president who has done great damage to the greatest economy in the world with his different ideas for it.

Let me be charitable and withdraw that Obama has done any of this on purpose.  I know some of you people may not want to hear that, can’t contemplate it.  Okay, let’s just say he’s incompetent and doesn’t know what he’s doing, he’s an avowed socialist, socialism doesn’t work, we’ll give him the benefit of the doubt. But nevertheless the economy is in the crapper, and it shows no signs of rebounding.

I don’t care what they do with the unemployment numbers, we haven’t had any significant economic growth, not enough growth to produce good jobs, career oriented jobs since this man assumed office.  But to hear him tell the tale we’ve never been stronger, we’re never better, we’re doing just gangbusters out there, and if Donald Trump’s elected, it’s back to the Dark Ages, it’s the end of the world.  And people believe this, because he is the president.  And when the president says it, people are not comfortable not trusting their president.  People are not comfortable doubting their president.

And here we are again. This was our position all through nineties, and once again we find ourselves in the same position trying to get people’s attention, trying to wake them up and get them to understand what is actually going on. “Innuendo. Nothing to see here.” The president said that he didn’t even know about Hillary Clinton’s basement server until he read about it in the news.  But we now know that he was communicating regularly with her via that server and knew she had it and that it was off the grid because he was using the fake name.

And now today we learn that Huma Abedin advised the White House (meaning him) something like eight or nine times when Hillary changed her email address so that he would have it so that he could send her emails via her private server and her address.  And he’s out there telling people that there’s nothing but innuendo here.