RUSH: Mel Gibson prepared for me a captioned version of the movie that he has out that just started, Hacksaw Ridge.  They’ve got a really interesting way of doing this.  You know, one of the problems with… I can’t go to a theater to watch a screener because nothing is ever close captioned in the theater and I can literally not hear the dialogue because I’m deaf and cochlear implant signal-to-noise ratio response is just… With all the soundtrack noise and noise in the theaters, I can’t.  I cannot. I can hear everything but I can’t comprehend the speech.

So I have to see things close captioned.  Well, they do not make prerelease screeners that are captioned. Some of them do when they want me to watch a movie and they go out of their way. But they’ve got a cool way of doing this now.  They post it on a server that they control and they give you a special address for the server with a username and password.  And you watch it and you can air play it, project it up to your big screen or whatever. But that’s it. There’s no DVD involved.  They’re not sending anything to you, and they can track who’s watching it.

If you give the address to somebody else, they know.  So it’s a way for them to keep control of it and they can shut it down.  And I think you watch it one time and it goes down.  You’ve got to watch it all the way through. If you pause, I’m not sure about that. Anyway, I watched it, folks, and it’s awesome.  You know, Gibson’s latest big success was Passion of the Christ which focused on violence.  We have to… Let’s put it this way: It did not run from the violence.  It did not. The real violence that actually happened, they didn’t portray it as less than.

It reinforces the value and the worth in holding them.  The cinematography is great like any Mel Gibson movie is.  The violence is gruesome.  It’s brutal.  The war scenes are just as good as any I’ve ever seen in any movie, including Saving Private Ryan.  It was just good.  I just enjoyed it.  I know it’s premiering, I think, last night.  It will not be up for an Oscar because Hollywood is still mad at Mel Gibson.  But

RUSH:  Oh, let me tell you one thing before I forget this. I told you that Mel Gibson made me a copy of Hacksaw Ridge with screeners, and I watched it and it’s awesome.  I’m not a movie reviewer, so acting performances and all that — everybody that’s in it — it’s just a good, good, good movie.  And one of the first scenes, the hero of the movie opens in his childhood.  And he and his brother are running around where they live in the Blue Ridge Mountains.

I don’t know whether it intends to or not, but I’m telling you the way I watched it, it does a great job of demonstrating how much less wussy our culture was than it is today.  Because I guarantee you, this opening scene, with these two young brothers, like eight or nine, 10 years old? They’re nowhere near home and they’re climbing trees and up steep mountains.  They’re scaling 25-, 30-foot cliffs and this kind of thing, the kinds of thing that parents would be put in jail for today (chuckling) if a liberal found out it was happening.

RUSH: One quick thing on “Hacksaw Ridge.”  I guess I neglected to explain what the movie’s about.  If I did it’s because I made the mistake of assuming you’ve all seen ads for it.  It’s a true story.  It’s about a man named Desmond Doss from the Blue Ridge Mountains, World War II era.  He wants to join, but he’s a Seventh-day Adventist and as such will not touch a rifle.  He will not touch a gun, but he wants to serve in World War II. 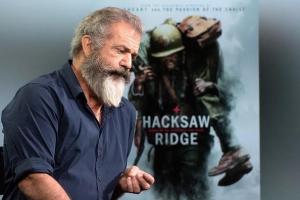 He saved 75 people.  Exactly what he wanted to do in signing up in the first place.  He did it without firing a shot.  The Japanese, in World War II, I don’t think people are properly educated about this.  It’s not a criticism, it’s just the case.  The way young people are raised today to look at war, you’d be stunned to find out how war really happened in World War II and the viciousness and the animalistic nature of the enemy that we faced in both places, in Europe and in the Pacific Theater.  I mean, it was brutal.  To this day the Japanese do not have a military, according to the terms of surrender we insisted on at the end of World War II.

It was not a time for political correctness, touchy feely, weakness of any kind.  And it’s accurately depicted here in this movie.  It’s violence, it’s got an R rating because of the violence and because of the gore.  But it’s true to form in everything historically that it tackles.  It will warm your heart in terms of values and tradition, and depending on what yours are, it will inspire confidence in you to hold onto yours as Desmond Doss did.

He’s a Seventh-day Adventist and a lot is made of that only in the sense that it relates to he refuses to fire a gun, but he doesn’t refuse to go to war.  They tried to call him a conscientious objector.  And he said, no, I’ not a conscientious objector. And he’s a hayseed, folks. He’s from the Blue Ridge Mountains.  Andrew Garfield portrays him, the guy who has so much hair it looks like he puts yeast in it.  But I was captivated by it.  They made a special edition of it with captions for me so I could see it.

If it wasn’t any good I wouldn’t tell you that it was.  But to me it was. (interruption) Well, I read some of the critics, “Too formula.”  I don’t pay much attention to critics, because I don’t know how to critique a movie the way they do.  You like it or you don’t.  Analyzing acting performances, yeah, they were all great to me.  I don’t know, I guess you can spot bad acting if you know what you’re looking at.  Anyway, that’s what it’s about.  That’s what I neglected to mention.