RUSH: Somebody is planning to report exit polling data starting at 8 a.m.  It’s from the Politico: “This year, a handful of different projects are underway to disrupt the rhythm and flow of information on Election Day — including one controversial effort that some worry could affect the actual election results. Slate and Vice News have partnered with Votecastr, a company helmed by Obama and Bush campaign veterans.”

Now, right there, that’s when you start getting a bad smell about things.  What in the world are Bush campaign veterans doing partnering up with Obama campaign veterans?  But it is happening.  “Slate and Vice News have partnered with Votecastr, a company helmed by Obama and Bush campaign veterans, to provide real-time projections of how the candidates are faring in each state throughout the day.”

Now, in the past they are released in what are called “waves.”  The early wave is usually around 2 p.m.  The next wave is around 5 p.m.  If you know how to watch — and they do not divulge actual vote counts according to exit polls until the polls in a state close.  But they will tell you all the demographic stuff they’re finding out.  “Women liked Hillary over Trump by a 2-to-1 margin in preferring a president with a vagina,” for example, or what have you.  That kind of stuff, they’ll start telling you.

But they won’t tell you how a state voted according to the exit polls.  But you’ll get all the demographic breakdown.  It doesn’t matter what network you watch.  It’s all the same data.  But around 5 o’clock is when everybody that works with the networks’ phones start ringing from folks that don’t work there, “What do the exit polls say? What do the exit polls say?”  And inexorably somebody leaks them.  I don’t have official access to the data, but I — as a powerful, influential member of the media — always get it between 5 and 5:30, and state by state.

Now, stop and think about that for a second.  People go in and vote however — they pull the lever, they mark the ballot, they do whatever they do — and they leave.  And they have voted.  And then they leave.  And an exit pollster comes up and asks them how they voted and other questions.  And based on what they say, that’s what makes up the exit polls.  People were lying to the pollsters. No, no. You know what was actually happening?  And that’s why what these clowns are doing tomorrow has such potential problems about it.

It turns out that the Democrats were using fraudulent exit polling data as a weapon to diminish turnout for Bush.  When that exit poll data began to leak out at the report at 5 o’clock that Kerry was winning big, it was supposed to keep Bush voters in the Central Time Zone and even the Eastern Time Zone where polls were open at home. It was to depress them, make them think, “There’s no sense in voting now if it’s over. For crying out loud, Mabel,” and they don’t vote.  And it was done on purpose. 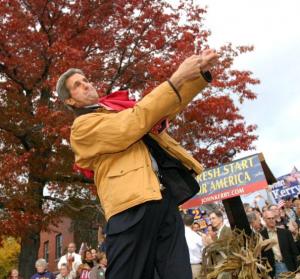 They’re going to take the exit polling data they’ve got and then start making projections all during the day.  This is not good.  There are some… You talk…? What is the likelihood that the people doing this have a preference?  I don’t care if it’s Trump or Hillary.  What if they have a preference and they color what they’re doing by virtue of that preference?  Early voting… I knew when early voting happened it was going to open the floodgate.  There’s no reason for early voting. Do you know early voting does not happen in California and New York?  They  don’t need to.  Democrats own the state.  There’s no reason to early vote there.  That’s why you ought to be suspicious.