RUSH: Now, yesterday afternoon, I, your beloved host was on the golf course.  We were just finishing up on 17.  We were walking from the 17th green on the way to the 18th tee and my phone beeped.  I had an alert from my brother.  So I looked at it, and that is when I learned that Comey had just announced that there was nothing new to see in any of these massive numbers of new e-mails that they had found on Carlos Danger’s laptop.

So it was a big to-do about nothing.  Nothing’s changed.  Hillary won’t be charged.  Nothing has popped up.  We didn’t find anything new.  So we walk onto the 18th tee and I was so ticked off I bombed one of the longest drives of the day.  As we golfers say, there was a lot of red ass in the swing.  Meaning I was ticked off.

RUSH ARCHIVE: The cynical view is that Comey is still carrying water for Clinton and is trying to get everybody to stop paying attention on the WikiLeaks dump because it’s starting to have an impact.  So you announce you’re opening the inquiry.  Get everybody all hot and bothered and focused on it. And then after three or four, five days, announce that it was a false alarm; nothing to see here, investigation now officially over. And meanwhile, in that five-day period everybody’s forgotten about WikiLeaks.  That’s the cynical view of this.

RUSH:  And everybody out there was falling all over themselves to credit me with that even though that view was presented to me in an email from a friend of mine who is a devout cynic.  And I shared his belief, his theory, and made no bones about the fact that it was him and that he was a cynic and that, therefore, this is the cynic’s view. The cynic’s view is that nothing’s real, everything’s faked, everything’s organized, everything is scripted, everything is choreographed and this was the latest.

Anyway, when I made that known, everybody out there in the conservative blogosphere and the Drive-By Media tried to attach that view to me on the basis that it was nothing more than just rag-tag conspiracy-type thinking.  Now it’s happened.  You should see the number of e-mails I got when I got home from the golf course yesterday.

“Man, oh man, Rush, did you call this.  I’m never going to doubt you ever again.  It’s amazing.  It’s amazing.  You called it, exactly what you said Comey was going to do he did, except he waited.”  I originally said — tell you how I phrased it to you:  The first opportunity we had to discuss Comey announcing the investigation was reopened, that was on a Friday.  It was Friday afternoon.  It was like in the 2:00 pm hour, the last hour of the program. 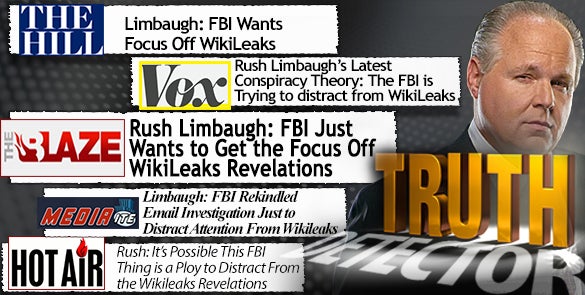 How many people said that?  There’s no way Comey would do this.  He’s not going to stick his neck out like that.  He would no way announce this unless there really was something of a bombshell nature.  Everybody thought that.  And I, El Rushbo, asked you to pause and ponder how you would feel if in the middle of the next week, say Wednesday or Thursday, that would be last week, that Comey came out and said, “Hey, we looked at it.  There’s nothing here.”

Well, that happened yesterday.  So I’ve got all these people sending me e-mails last night and messages.  “Man, oh man, did you call it.  Wow.”  Folks, I don’t know if I called it.  It was the cynical view that I always played it out to be.  But I wasn’t surprised, I’ll just tell you this.  (interruption) I know, this is the only place that that possibility was explored.

This is the only place in media where that view, that quasi prediction was even addressed.  Everybody else bought it hook line and sinker.  Well, I say everybody else.  There could be some stragglers out there.  We can’t know what everybody out there says about things, Mr. Snerdley.  But this clearly was the origination of that line of thinking.  And, boy, I was taking my share of heat for it as though I had descended into the tinfoil hat club.  And now it’s happened.  And how did you feel when you found out about it yesterday?

Were you shocked?  I wasn’t shocked.  I was surprised by the timing.  I thought once we got past Wednesday or Thursday that such an announcement wasn’t going to be made.  I was not shocked that it happened, not at all.  I’m being honest with you.  I’m not surprised.