RUSH:  Donald Trump in Sarasota today was over the top.  It was another massive crowd, filled with energy, and we’ve got four sound bites.  Let’s just get started.

TRUMP:  Isn’t it amazing when Jay Z and Beyonce use the filthy language that they use in their songs — using words that, if I ever said those words, it would be the reinstitution of the electric chair, right?

TRUMP: Right?  It’s true. And they use these words, and then she comes on and hugs them like everything’s right. And yet with me, “He’s very lewd.”  It’s a new word. “Lewd.”  I’ve never seen anything like it in my life.  She is such a phony.

RUSH:  I’ve had people say to me, “I wish he’d stop dealing with this. Come on, get back to the issues. Don’t respond to this stuff.”  Look, my entire career, folks, I’ve had the same thought Trump has about the overall cultural rot that’s happening here, and how it gets celebrated by people on the left.  And when they engage in actually taking our culture down to the gutter, they are applauded, they are given awards, they are heralded as great artists and so forth.  And you let one of us come out and have a slip of the tongue and say something and they’re all over us and want to take us out and destroy us.

Nobody ever stands up to them on it, and Trump is.  And it’s one of the reasons that Trump has this legion of support is that he fights back against these things that people all over the country who do not think their voice is heard are also saying.  Let’s take a look at this.  Let’s take two events.  You heard about the male soccer team at Harvard.  Last Friday in the news, the male soccer team at Harvard was keeping a scouting notebook on the incoming female soccer team players.  They were rating them on a scale of 1 to 10 and other scouting report aspects of these young arriving female soccer players.

When the Harvard administration found out about this, they cancelled the remainder of the male soccer season as a way of penalizing the men on the Harvard soccer team for daring to objectify women like this.  “Who rates women on a scale of 1 to 10?” they said. (chuckles) Try everybody? They even made a movie.  You guys remember the movie Dudley Moore was in called “10.”  And you know who the starrette was?  It was Bo Derek.  They even made a movie! She was a 10.

Whether people want to admit it or not, this kind of thing happens.  Largely, it’s human nature.  I have seen male sports writers today supporting what the Harvard administration did and pointing out that this is unseemly, “And if I had a daughter on the soccer team at Harvard I wouldn’t want her written about this way, talked about this way.”  It’s just… It’s a different era.  We have to accept it.  The male soccer team basically had their season cancelled for daring to do this.  Okay.  Fine and dandy.  Think about that as you will.

Hillary Clinton comes out — Trump’s right — and hugs them.  And they’re using these lyrics.  And it’s degrading to women.  It objectifies women by another woman, and by the top male rap artist in the country or R & B.  How would you classify Jay Z?  Is he a rap artist or R & B?  What would you say he is, just an entrepreneur crossing many venues? (interruption) “Huge celebrity.” Okay. So it comes out and he sings about his own wife in words like this, and Hillary comes and hugs them both and thanks them.

Meanwhile, the guys at Harvard on the soccer team, they had a little scouting book on the incoming females? “They gotta go! Cancel the season.”  So Trump has a point here.  It’s a two-way street, and which actually is more degrading and harmful?  Popular songs with lyrics like that…?  Even beyond that, just the fact that here comes Hillary Clinton embracing them and accepting their support.  Meanwhile, Obama’s out there lying about Trump being supported by the KKK.  Anyway, my point is that people have noticed this for decades now and they’re fed up with the hypocrisy, and here’s Trump reacting to it.  So I think, on balance, he helps himself with it.

Here’s the next bite, Trump in Sarasota…

TRUMP:  We’re going to win Michigan, by the way.

TRUMP: The women.  The women are going to come out big.  It’s all a phony deal.  They’re telling you a lot of phony stuff.  They are so worried.

RUSH:  The media is telling you a lot of phony stuff.  So worried.  I’m going to win more women and blacks than they think.  We’re one day away.  Here’s the next bite.  This is Trump just this morning in Sarasota.

TRUMP:  One of the things they’re seeing in a couple of these states like Florida: African-American aren’t turning out.  And when they do a lot of them are voting for Trump. 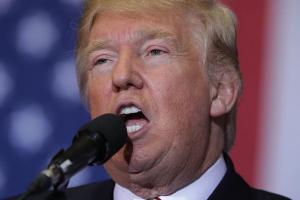 TRUMP:  I think the same is going to be true with Hispanics.

TRUMP:  Do not let this opportunity slip away.  We are fighting for every citizen who believes that government should serve the people, not the donors and not the special interests —

TRUMP:  — and we are fighting to bring us all together as Americans.  Just imagine what our country could accomplish if we started working together as one people, under one God, saluting one American flag.

RUSH: And let’s compare.  We happen to have the Bamster, (impression), “Barack Hussein Obama. He was out there today and he was in Ann Arbor — Ann Arbor, Michigan. Why? I don’t know why they sent me here.  This ought to be wrapped up!  What am I doing here?  Where’s the script?  What do I say?”  And here it is.

OBAMA:  Michigan, all that progress goes down the drain if we don’t win tomorrow.

OBAMA:  This race will be close here in Michigan, just like it will be in a lot of parts of the country.  And I know it’s been a long campaign.  And at the end of every campaign brings all kinds of craziness and negative ads and noise and distractions.  And for those of you who are voting for the first time, I know sometimes you think, well, this is kind of strange.

OBAMA:  It’s not always like that.  I want you to tune out all the noise, and I want you just to focus, because the choice you face when you step into the voting booth, it really could not be clearer.  Donald Trump is temperamentally unfit to be commander-in-chief.

RUSH:  After all this, that’s all they’ve got.  They can’t tell us how Trump’s policies here or there are bad.  Remember, Trump’s fingerprints aren’t on anything, folks.  Really, if you’re not happy with the way things are going, you’ve got one candidate in this race whose fingerprints are all over it, whose policies have been implemented and have given us this.  Okay.  This has now become obligatory, the obligatory Obama mention at every rally he attends.

OBAMA:  If you accept the support of Klan sympathizers, if they say they really like what you’re doing and you’re kind of slow to denounce or separate yourself from them, that’s what you’re going to do when you’re in office.

RUSH:  He’s trying to say that Trump has been courting the KKK and the KKK has been responding.  KKK supporting Trump. (imitating Obama) “If you accept the support of the Klan when you’re campaigning, what’s going to change when you get in the Oval Office?  When the Klan comes calling, you’re going to let them in.”  That’s what he’s trying to tell people.  The Klan are going to be regular visitors at the Oval Office if he gets elected in office because what you do on the campaign trail only gets amplified when you’re in the Oval Office.

This is disgusting, folks.  It’s despicable and bottom-of-the-barrel kind of stuff. It may be the best they’ve got.  I don’t doubt they have focused group this.  I don’t doubt — maybe they haven’t.  Maybe they’re just winging and prayering it here as we wind down.  But this is beneath everybody.  They don’t care.  It’s like Harry Reid lying about Romney not paying his taxes.  When it was finally exposed two years later, you know what Harry Reid said?  (paraphrasing) “I don’t care, we won, didn’t we?” He actually said he lost so it must have been okay.  Reid made up the fact that a friend told him that Romney hadn’t paid his taxes in 10 years.  The media went out to investigate and it took them two years after the election to find out that wasn’t true.

They went back to Dingy Harry.  “You told us that Romney hadn’t paid his taxes in 10 years.  That’s not true.”

“Well, he lost, didn’t he?”  You want more of that?  Then Hillary Clinton is your girl.