RUSH: “Rush, what do you mean, ‘In two weeks the left and the Democrats will revert back to who they are’?”  Okay, let me give you an example.  Back in 2002 when the Republicans won the midterms… It never happens. The party in power always loses midterm elections. People just naturally — human nature — express their unhappiness with the first two years of a presidency. It just happens, and the party out of power usually picks up seats.

What just happened?  Let’s keep this in perspective.  We just had, in figurative terms, a landslide election.  What I mean by that is the people that showed up and voted yesterday were very clear in what they were rejecting and what they were supporting, okay?  So, Trump gets inaugurated, and it’s not gonna be long before he fills a vacancy on the Supreme Court.  In fact, he’s gonna have a whole bunch of ’em, folks. This is great.  He’s gonna have a slew of them.  This election, I think, is going to speed the process of vacancies occurring on the Supreme Court.

But that’s just a little side bet that I will make with people, and I will not lose.  Here’s what’s gonna happen.  Whoever he appoints — unless he goes out and finds Ruth Bader Ginsburg Jr. Let’s play it safe. If he nominates somebody in the image of Antonin Scalia, let me tell you what’s gonna happen.  Chuck Schumer, who will be the leader of the Democrats in the Senate — and whoever the leader of the Democrats on the Judiciary Committee is — will immediately call a press conference and say that the nominee is unacceptable, that he’s too far outside the mainstream.

“We can’t put up with this. We can’t tolerate this,” and they will begin to smear this nominee and smear Trump, who has just won the election. Trump will have won big. The Republicans will have maintained the House. They have held onto the Senate. The American people… I don’t care what you want to say about the Electoral College. That’s gonna be the second thing they complain about.  Just give me a moment to get there.  But I’m giving this example.

So despite that, the Democrats will say that whoever Trump nominates is out of the mainstream, is unacceptable, and it’s not what the American people intended when they elected Trump.  The media will pick that up.  The media will then begin to help the Democrats smear this nominee on the basis that he’s not qualified because Trump chose him. He’s not qualified because Trump’s nominee does not reflect the mainstream of America.  Really?  They get to define the mainstream when they lose?

That’s exactly what they do, my friends.

We’ve not lost the country, to them or to anybody else.

So you can look for that and other thing like it.  You got cabinet appointments, legislation that Trump proposes.  You’re gonna hear Democrats react to it as though this is not what you voted for.  You’ll have voted Trump and you’ll have voted all these Republicans in, and then when the Republicans and Trump start doing what you elected them to do, the Democrats will run out and say, “That’s not what you elected ’em to do!”  You elected them to come out and do what the Democrats would have done.

Don’t forget what I told you about the reason Obama’s gonna stay in Washington in his post-presidency.  I predicted it to you.  I’m making a bunch of predictions today.  They’re gonna come true.  Just mark ’em.  Whatever they try on Obamacare, Obama’s gonna call a press conference with his buddies in the media — the people, poodles that have been humping his leg in the media — and they’re gonna join forces against Trump and say, “This not what the election meant. This is not what the American people wanted.

“We can’t have this, cannot allow this to happen.” There will be a battle begin, and it’ll boil down to Obama — maybe not Obama, I don’t know, but the Democrats certainly — saying, “This is not what the American people wanted in the election,” and the reason, folks, is they don’t give up.  Their purpose for living is to beat us.  We are their number one enemy.  And even when they lose, that remains their objective.  I’ve watched ’em.  I’ve studied ’em.  I know who they are.  I know what’s gonna happen.

What needs to happen on our side is what needs to be different.  We need to stop kowtowing to it.  We need to look ’em in the face and laugh and say, “You know, the corner of the room is over there.  You guys lost. Learn it, love it, live it, and leave us alone.  We’re in the process of fixing the mess you made!”  We don’t ever say that.  We talk about crossing the aisle, and we talk about considering opposing views, because we’re of the opinion the American people don’t like us, because the media’s told the Republicans the people don’t like ’em and Republicans have believed it.

And God bless everybody involved for make it happen.  It couldn’t be anymore crystal clear.  There’s nothing ambition about this at all.  Big Government liberalism — whether people know it or not — was told to go to hell.  Big Government liberalism is Obama.  It was rejected, whether it was positioned that way… I’m sure Trump didn’t run around saying, “We gotta beat liberalism.”  All well and good.  Doesn’t matter what you label it.  It is what it is, and it just got rejected. It just got shellacked.  It’s not hard, and it’s easy to learn from.

And that’s why we’re out here sitting so frustrated, ’cause we know it could be defeated. We know they could have been sent packing. We know Obama could have been defeated on substance if somebody would have just been honest with the voters about who he was and what he was gonna do, because it was knowable.

RUSH: In addition to this example I gave about how they’re gonna approach Trump’s first SCOTUS nominee, here’s something else that you can make book on.  It is going to happen.

The left, the Democrats, are going to start caterwauling about the electoral and that it has to go.  It may not happen today, but it’s going to happen.  Because it looks like Hillary barely won the popular vote, and that’s because of the state of California and the state of New York.  But Trump won the Electoral College.

This whole thing is a great illustration of the brilliance of the Founding Fathers, by the way, and the system they devised.  To make things equal around the country in terms of representation and proportionalism, regardless of population centers, and that’s what the Electoral College is for.  It also served another purpose back in the early days.  It was to guard against a bunch of idiot citizens not knowing what they were doing, say, and electing Putin.  Ha-ha-ha-ha.  Throw that in.

But it works out famously well.  Trump has now won Michigan.  He is padding his margin in the Electoral College.  It’s not close.  It doesn’t come anywhere near Florida in 2000.  But the left does not accept that the founders of this country gave us a Republic of Sovereign states, and they’re gonna make a move to eliminate the Electoral College because of this, ’cause they’re going to present this as they’ve been screwed again like in 2000.

And the reason they’re gonna do this — don’t listen to Hillary saying we’ve gotta give Trump an open mind, we owe it to Trump to work with him, Obama saying the same thing. Folks, they don’t mean this.  Please listen to me.  This happens every time they lose.  They do not mean it.  They sound magnanimous, but they’re not.  They are seething with rage and they’re already plotting how they can delegitimize this Trump victory, and this is the way they’re gonna do it, by claiming he’s illegitimate. 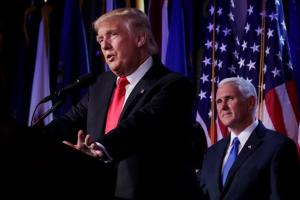 But they took this country down the sewer taking George Bush out.  It took them four years to get his approval number down to the thirties, and they’re gonna start on Donald Trump in about two weeks.  They will intensify it after he is inaugurated.  This is gonna be one of the ways they do it.  Do not doubt me.  This hasn’t even begun yet.  Just stick with me and don’t doubt me.

RUSH:  I just checked in with CNN, and the infobabe there, Brooke Baldwin, was asking Bill Burton, former spokesman for Obama — by the way, this guy was on Fox last night, too, during this period of time where Trump was coming back, about seven o’clock Trump was losing in a landslide.  About nine o’clock, Trump was making a move.  That’s how they presented it.  It was all BS.  And they answered, “It’s nothing, it’s nothing. Trump’s not going anywhere, doesn’t have a chance. Not gonna go anywhere. We’re not worried. We’re not nervous.”

So today he’s on there, of course they just got shellacked, and she says, “Is there anything, Bill, is there anything (crying) is there anything Obama can do to protect the things he’s done from Trump when Trump gets in there?”  I’m watching this, I said, they’re worried all these great things Obama’s done, Trump’s gonna go in there and just rip it all out.  And Bill Burton said, “Sorry, no, Trump will have the keys and do what he wants.”  Because here’s the thing you leftists are gonna have to live with.  You stood there and you stood silent when Obama was ignoring the Constitution and doing all of this garbage via executive order.  And you applauded that use of power by the president.

It’s gonna be very difficult for you guys start piping up and whining and moaning about a president using powers he doesn’t have when all Trump is probably gonna do is grab that, “Nope, that’s not legal. Nope, that’s not, rip that out. Nope, can’t do that.”  And Burton said there’s very little our president could do.  He knows that this stuff’s not etched in stone, is the point.  That’s why Obama wanted Hillary in there, to leave his stuff in there.  But stuff that’s not enacted via legislation, it’s up for grabs.  They know this.  And that’s why when Trump starts this, you’re gonna see Obama pipe up, folks.