RUSH: Here’s Goodell.  He was asked by Andrew Ross — there’s a bunch of Sorkins out there and I get ’em confused, but this is Andrew Ross Sorkin talking to Roger Goodell, the commissioner of the National Football League.  Question:  “The coarseness of the Donald Trump campaign, the comments he made about women and other things, does that make your job as commissioner harder?”

RUSH:  Are you kidding me?

GOODELL:  — harder publicly? Listen, I think our country has to have more respect for one another, and we have to unite.  I saw some very positive signs of that yesterday with our current president, Hillary Clinton’s comments publicly and others coming together and saying we have to get together, we have to unite, we have to address some of the issues and work together.

RUSH:  What this was about, you know, the NFL is undergoing a spate of domestic violence.  By the way, that’s been happening before Trump was elected.  Ray Rice dragging his knocked-out wife off the elevator.  The kicker for the New York Giants.  Now there’s another guy.  It’s rampant out there, and Goodell’s saying that Trump being elected is gonna make it harder for the NFL to combat domestic violence.  That’s hilarious.  (laughing)  It’s ridiculous!

The election of Donald Trump — look at the presumptions that go into everything. What I was gonna tell you about the Donna Brazile story, she struts on stage for a postmortem meeting, Democrat National Committee, to discuss what went wrong. And she starts telling everybody how great things are, they’re gonna start putting things back together, and they weren’t buying it.  And this kid, a young kid, a member of the Democrat National Committee named Zack, stands up and starts heckling her and tells her that she’s an old biddy, basically, and she’s gonna die of old age and he’s gonna die 40 years before his life expectancy because of climate change.  It is hilarious.

I think deeply about a lot of these things ’cause I care about people, I really do care, folks, bottom of my sizable beating heart.  Ba-boom ba-boom ba-boom.  I care that the Democrat Party through its fearmongering has so misinformed people and literally created, we have The Walking Dead, we have The Walking Fearful.  And this guy literally believes — I’ve been trying to tell you that these young Millennials think that the planet is not gonna be able to support human life by the time they hit 65. 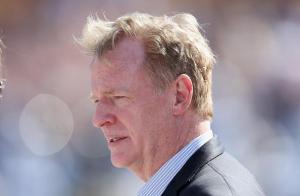 They are terribly frightened, really, really afraid, folks.  I’m not exaggerating here.  And the people who have made them feel this way have lied to them.  They don’t live and walk around in this kind of fear.  They use the fearmongering to scare these people into party loyalty.  It is also a way of defaming the opposition.  But look at how easy it apparently has been.  Roger Goodell, the commissioner of the National Football League, thinks the election of Donald Trump is gonna make his league have a greater challenge with domestic violence.

Why?  Does it mean that the election of Trump is sending a signal to the players in the NFL that somehow it’s okay to go out and beat your wife?  What can this possibly mean?  But you have to stop and pause and realize these people are serious.  I’ll say it again.  They started talking this way back in the early nineties.  And back then we all laughed.  I mean, we had some of the greatest parody bits, some of the greatest satire bits laughing at this stuff and making fun of it on the premise that nobody would believe this other than extreme kooks.  And little did we know their mainstream was sopping it up and believing every syllable of it and then voting on it.