I’d Tell President-Elect Trump to Yank Every Dime of Federal Funding from Cuomo, De Blasio, and Anyone Else Ignoring Immigration Law

RUSH:  From the UK Daily Mail: “Governor Andrew Cuomo Takes a Stand Against Trump and Offers People ‘Under Attack’ to Take Refuge in the Empire State –– Cuomo wrote: ‘Whether you are gay or straight, Muslim or Christian, rich or poor, black or white or brown, we respect all people in the state of New York.'” That’s BS.  Just, what was it, a couple years ago Cuomo invited all pro-life, pro-gun conservatives to leave New York State? Does anybody remember this?  He said New York is not open to conservatives.  It’s not going to be a welcoming place.

If I were Trump, I’d call Andrew Cuomo and say, “You want to do this?”  But I’d call De Blasio, too. He’s going to do the same thing in the city, and I think Rahm Emanuel is doing the same thing in Chicago.  I’d call these guys and say, “Fine, you want to do this?  You keep it up, and I’m gonna impound every dime of federal money your cities are getting.  I’m not gonna sit here and openly tolerate lawlessness like you are encouraging, Governor Cuomo.

“Illegal immigration is illegal.  Sanctuary cities are illegal.  Sanctuary states are illegal.  And we are not putting up with this.  We’re not gonna look the other way in the eyes of ‘compassion’ or what have you, while you continue to bring in undocumented hopefully soon to be registered Democrat voters under some premise that they’re being discriminated against by a bunch of hatemongers because none of it’s true. And if you want to keep getting federal money, you’re gonna shut this down and stop this right now.”

RUSH:  By the way, the mayor of Los Angeles is also in on this, mayors, Governor Cuomo, city of Chicago, will continue as immigrant sanctuary and the mayors of New York and Los Angeles pledge to remain immigrant sanctuaries.  All of this is Reuters, U.K. Daily Mail, AP.  This is lawlessness.  Sanctuary cities are against the law.  Illegal immigration is against it law. 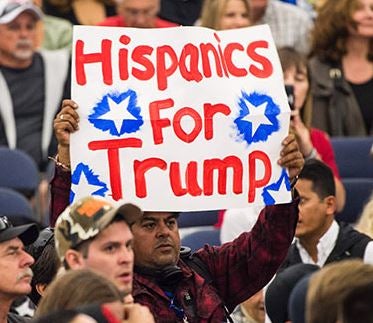 You know, the Democrats are always trying to help us do the right thing, aren’t they?  Chuck-U Schumer and Dingy Harry and Nancy Pelosi have been telling us that unless we reach out to Hispanics and unless we join this push for amnesty, that we are never gonna win the White House again, and look what happened.

Even on election night, even on Fox News, on Fox News they had people left and right talking about how Trump was gonna lose because all of the early voting Hispanics just had to be voting for Hillary.  And Trump got the identical number of Hispanics that Romney got.  We didn’t lose any ground with Hispanics.  We didn’t lose anything with Trump’s position on this.  And many Hispanics actually ended up being Trump supporters.

So I’d like to help the Democrats like they have been offering us.  And I’m gonna say, if you guys don’t shut down your sanctuary cities, you’re gonna continue to become an even smaller minority.  People are gonna continue to vote against you. Maybe not in your city which is all left, all Democrat, maybe not in your state, but nationwide, the Democrat Party is not gonna provide a launching pad for you because there aren’t gonna be enough people that are gonna vote for you because the fact that you continue to engage in wanton violation of United States law is going to be made clear and abundant to everybody.

You are not part of a governing majority nationwide in this country, and your way of thinking is not representative of a majority of the thinking in this country.  It just isn’t, and it hasn’t been for a while.  It’s been an illusion that everybody bought, including me.  Look, folks, I can’t sit and chastise anybody.  We all fell for this, and largely because of the way our own party leaders reacted over the years.  I had them come here and tell me we couldn’t win the White House ever again with just us.  So whether I believed it or not, they did.

And look, look how one election, one election has exposed so much fraud!  Fraud in the media, fraud in the Democrat Party.  So much wanton illusion.  So much purposeful lying to people exposed in one election.  It’s overwhelming.  When you really get into it and dig deep, the meaning of this election and what has been put on display, what has been exhibited here.  It’s profound and it is deep.

RUSH: But here is Alan in Allentown, which we also own.  Great to have you, sir.  How you doing?

CALLER:  I’m doing great, Rush.  It’s wonderful to talk to you.  I’ve been listening for a very long time.  I used to watch your TV show.  Actually as a kid I introduced my father to your program when I —

RUSH:  I know.  There was somebody from Allentown in the TV audience every show.  I’m not kidding.

CALLER:  It was a wonderful program, and I was sad to see it go.

RUSH:  I appreciate that.  I really do.

CALLER:  I’ll get to my point.  What maybe you could elaborate on is I seem to remember Democrats reminding Republicans that immigration is federal law and I just wondered if you could elaborate on that and maybe refresh my memory.  I just remember there was a big to-do about that a couple years back where Republicans were trying to do things and we were reminded, “Hey, step aside, it’s federal law.”

RUSH:  Yeah, I know exactly what you’re talking about.  I’ll give you an example.  You’re talking about Arizona.  State of Arizona, federal law is not being enforced immigration law, so the governor at the time, Jan Brewer, all right, we’re gonna do our own set of laws here that are gonna mirror federal law, and we passed ’em, and they implemented them, and Obama sued them.

And they rendered Arizona’s law, and a judge backed ’em up, every Obama judge they could find backed ’em up. So he’s got a great point here.  Federal government told a governor (raspberry) you.  You have nothing to say over immigration.  Now he’s asking, well, how can the governor of New York and how can the governor of Chicago and the mayors of New York and Los Angeles get away with defying federal law by establishing their states and cities as sanctuary cities expressly for the purpose of housing and paying for illegal immigrants?

And the answer is — dadelut dadelut dadelut — according to the law, they can’t.  But Obama chose not to enforce it.  Obama chose not to enforce very much of immigration law, which is why I said, if I were Trump, I’d call these guys and I would say, “If you don’t renounce this, then every penny of federal money you get is gonna be impounded until you do.”

Now, let me address something here.  I’ve had a couple of emails from people, I opened the program by saying that, and I also opened the program by — I mean literally, before I even greeted everybody and said hi, welcome to the program, I said, if it were up to me, if I were Trump, I would call Obama and I would call Hillary, and I would demand that he tell those protesters and rioters to stand down, or I will. And that I will call local law enforcement all over this country and I’m gonna tell ’em, do what you have to do; I have your back when I’m inaugurated in January.