RUSH: Grab audio sound bite number 27 and number 28.  And I may not play number 28, depending on what I hear here in number 27.  This was outside Trump Tower in New York City today.  This socialist mayor, Bill de Blasio, held a press conference to talk about his meeting with Trump.  And here’s a little bit of what he said.

DE BLASIO:  My job as mayor is to be their voice and to give him perspective on what New Yorkers are feeling right now, what their concerns are, what their fears are.  I thought it was very important, particularly as the president-elect begins had his transition, for him to hear the voices of the people —

DE BLASIO:  — and to get some perspective from outside the transition bubble.

RUSH:  He knows.  He doesn’t need you, of all people, to tell him.  Now, here’s the hubris of this. Here is the mayor of New York City, who is largely considered to be kind of a laughing matter, and he wants to meet with Trump because he, de Blasio, is the voice of the people, and he, as the voice of the people, needs to tell Trump what people on the buses and the streets and the subways are thinking and doing and saying.

So, once again, the presumption is Trump’s an idiot. He’s blind, deaf, purposefully not listening, and he’s gotta know how we’re hurting. He’s gotta know the pain. Trump’s gotta know we’re hurting, we’re in pain, and do something about it now.  So de Blasio decides he’s going to carry that message.  Yeah, I think let’s play the next sound bite.  De Blasio continued with his recounting of his education… 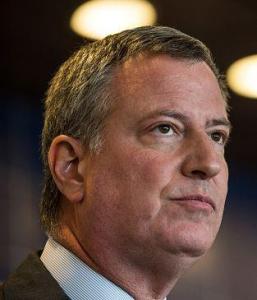 RUSH:  Oh wow. This guy lectured Trump on everything.  But here’s… (interruption) I know he’s not popular.  That’s my whole point. He’s a laughing matter, but he’s not popular.  But this guy presumes to tell Trump… Notice what it is.  He’s gotta know how people are feeling. He’s got a feeling, was feeling — and I told him, I told him, and he knows now.  And that’s what we are dealing with.  All these people are feeling rejected because they have been, massively so.