Book #5 Is Available Today! Rush Revere and the Presidency 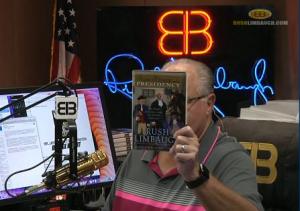 We’re so grateful, folks. We are just so grateful and thankful for the opportunity that the confluence of events has presented us with this, the fifth book in the Time-Travel Adventures with Exceptional Americans series starring me, Rush Revere, as a revered substitute teacher at Manchester Middle School.  And my talking horse, Liberty, able to time travel back to any point in American history I want because my horse can time travel and talk and I can take students from my substitute class, and that’s what the books are about.

I’ve been holding the latest copy in front of my face on the Dittocam since the program started because I wanted people to see it.  We’re so proud of this, folks. We’re proud of the record numbers of pre-orders that you have made possible with this book. But we’re really excited about the opportunity that we have been given.

We wrote the book about the presidents. Rush Revere and the Presidency, it’s about George Washington and how he became president, how did it all happen, what are his thoughts about it, expressed in ways that young people will relate to and learn from.

RUSH: It was in this particular season that we decided to write the fifth book in the Rush Revere Time-Travel Adventures with Exceptional Americans series. This one is on the presidency, and that’s the title of it: Rush Revere and the Presidency.  And man, oh, man, here’s what the book looks like again.  I don’t have time to zoom in.  I’ve only got… I can’t drop this. I’ve got only two hands. So you’ll have to look at it a little closer there.  I’ll zoom in tighter a little bit later.

It’s on the bookshelves and in the stores and on the shelves today after a record pre-order.  Now, we struggled, we sweated, we slaved to meet the deadlines and get this out because we were writing this and assembling it and doing the illustrations and everything and fact-checking it — the historical checks — all during the campaign.  It has been a hectic, hectic time, but we felt duty-bound to do it because the objective here is to tell the truth of the American founding, which is necessary now more than ever.

Given the way our founding has been distorted by no less than the current administration and everybody in it and the media and what kids are taught from kindergarten on. Middle school, high school, college.  The truth of the founding is a giant lie, led by Howard Zinn who writes the most popular — well, the most frequently used — textbook for American history in schools today.  And the purpose of this series has been to reach young people.  It’s not a children’s book —  it’s got pictures and crayon drawings and cartoons. But this is an actual hardcover book for young people.

What we found is their parents and grandparents who also read it, in many cases are learning things they didn’t know.  That’s how bad the state of public education on American history — particularly the founding — is, that people in adult strata can read these books and actually learn things they didn’t know because they were never taught them, either.  The technique here is, I say, the time-traveling horse, Liberty.

The talking, time-traveling horse. Because of a lightning strike early in his young life, the horse is mysteriously able to time travel and speak — only in the past, to the past, and only within American history.  But anywhere Rush Revere wants Liberty to go, he can go, and take students.  And so the reader is actually taken to these various historical events that we highlight and focus on, and they become part of the story.  The students of the substitute teacher, Rush Revere, actually learn from, speak to, listen to the Founding Fathers and great historical figures of America.

And in this book, it’s important to point out, it’s about the Washington presidency. But we have included a lot on Martha Washington and Abigail Adams because the wives, the women in this era were crucially important to who their husbands were.  And we wanted to make sure that young girls reading these books were inspired and motivated as well, given the attempts to confuse them in America today, both in history and in the media.

In a nutshell, after the long, hard fight for independence from Britain, the American patriots and Founding Fathers never wanted to live under the rule of a tyrant or under the rule of a king again.  They fought desperately for the freedoms described in the Constitution, the Bill of Rights.  They worked to ensure that they would always be protected.  They limited government.  They limited the role, the scope, and the power of government in our founding documents.

George Washington was thus inaugurated as the first president of the United States in 1789 to be the leader of the American people, and the readers of this book are taken back to that time in history where they experience what Washington went through, the entreaties to him to become a king, what he intended, how he looked at the entire thing, the pressures and the joys.  We try to bring it home to the reader and make it real for them.

This was the first time in human history that anything like this had ever happened, where free people elected their leader who was subservient to them.  And it’s a reminder of how important the presidency is.  It’s a reminder of how many have sacrificed for our right to vote (despite the Hamilton cast not even bothering to).  It’s the right to vote to create the system that we all know very well and how vital it is that we preserve it and pass it on to future generations.

RUSH: Again,  today the book. The fifth book in the Rush Revere Time-Traveling Adventures with Exceptional Americans series is on the shelves, if you can find it, Rush Revere and the Presidency.  In this adventure, Liberty and the crew of students travel back in time to meet the first presidents and first ladies of the U.S.  They experience the election process firsthand, understand what it takes to be a great leader.

In the process, the young students come to realize what it’s really all about, who George Washington was and why we might not have the United States today were it not for George Washington.  That’s really what the book is about — and Martha Washington, John Adams, Abigail Adams. It’s a labor of love, folks, and it’s just a great opportunity, given everything that’s happened now, to open young people’s minds to the joyous truth of America.

RUSH: One more little thing, a little anecdote here about Rush Revere and the Presidency.  Little did we know when we were writing it — it was Kathryn’s idea — but we have a Donna Brazile character in this book.

How prescient are we?  One of the other students running for class president is a character that’s been introduced in previous books.  Her name is Elizabeth, and she is a haughty, spoiled, snot-nosed brat.  She’s the daughter of the principal.  And in this election, she cheats!  She cheats.  I’m saying to you that we essentially have our own Donna Brazile character in the book, even though at the time we wrote it we had no idea.  We had wild guesses, of course. The left cheats at pretty much everything they do.