RUSH: This is Joe in Mahwah, New Jersey.  Welcome, Joe.  Great to have you on the program, sir.  Hi.

CALLER:  Hi, Rush.  How you doin’?  My question is — and I’m glad you brought up the Electoral College in your opening statement — what happens if, by chance, they were able to flip the votes to Hillary?  What recourse would Trump have?

RUSH:  I have asked a lot of people if they thought there was any possibility that the left’s efforts at intimidating the Electoral College could succeed, and to a person — to every man and woman expert I have asked, Joe — they have all said it can’t happen.  In many states, the electors are required by law to vote the way the popular vote in the state went.

RUSH:  Yeah. Look, I think your concern is real.  I have more concern about this than the experts that I just talked about.  Everyone I’ve talked to says, “Naw, naw nothing there. They can’t. It’s impossible.  No matter what kind of pressure’s brought to bear, death threats, it’s impossible.”  I don’t believe it.  I’m not gonna believe this ’til it happens.

RUSH:  I think it’s entirely possible that they…  Now, if the electors end up voting in a way that elects Hillary Clinton, it would not stand. That would be a change from the popular vote. The House of Representatives would end up determining the presidency and that would, of course, be Trump.  So… But, Joe, hang on here just a second.

RUSH: We welcome back to the program Joe in Mahwah, New Jersey.  Joe, here’s the way this all could possibly happen, as various scholars here at the Limbaugh Institute have looked at this.

RUSH: Because of the number of states — it’s either 21 or 29 states plus DC — that have laws mandating the electors follow the popular vote in their states, but if they do, the penalties are not that great. They’re financial. They’re not that great. But the law is the law, and most people abide by it.  The rule of thumb is this. In looking at this, experts don’t believe that there are enough places where this could realistically happen to put Hillary over 270. But!  But!  There is a scenario, according to my scholars who’ve looked this, where it could happen that Trump doesn’t hit 270, either.

CALLER:  Right.  That’s what I was more concerned about.

RUSH:  Well, if that happens, it goes to the House of Representatives, and the Republicans in the House would choose the president, because they’re the majority and Trump would win.  Now, all of this is a long shot. But the effort that is being made to intimidate and threaten these electors is practically unprecedented, and I’m told much of it is it coming from the Hillary camp. Much it.

And who knows.  But again, I just want to tell you: Practically everybody I’ve asked is acting like there’s not a single thing here that can go wrong.  Everybody I’ve asked.  But I don’t trust that because I know who these people are and I know what they’re doing.  I read you the sample email at the beginning of the program about how they’re threatening these electors.

RUSH:  And they’re promising to pay their fines. Some, there’s a fine if you don’t vote as you’re pledged to vote.  So until it’s done, I don’t trust it.  But regardless, if it happens, the House of Representatives likely would end up choosing the president. They vote, and the Republicans have the majority there, and I guarantee you there would be no question now that they would all vote for Trump. So he’s still gonna be president.

But if what you described happened, it would be unprecedented. It would be. You want to talk about roiling the country? The Clinton camp would run around saying they’ve been cheated twice, ’cause they’re probably thinking they’ve got this in the bag.  Some of the Clinton people, they delude themselves, and I’m sure a lot of them are thinking they’ve got this Electoral College thing done, and there’s gonna be this giant earthquake on December 19th.

CALLER: Well, I hope not. I mean, that would be a constitutional crisis that we’ve never seen before.

RUSH:  We are gonna be in a constitutional crisis as long as there are leftists, because the Constitution is their obstacle. The Constitution is what’s standing in their way of getting where they want to go.  Joe, before you go, your turn.  Do you want a new iPhone 7 or 7 Plus?

CALLER:  Oh, that would be great.  Seven plus, please.

RUSH: (laughing) You know, I thought seriously about limiting all calls to only AT&T users.  Well, you can take your pick of colors.

RUSH:  You want black? You will get black! You want the matte black or the shiny black? 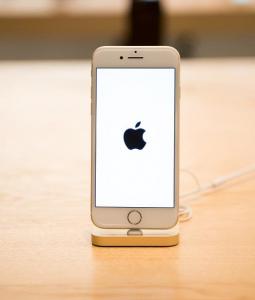 RUSH: — it might have a T Mobile SIM card in it, it might have an AT&T SIM card in it, and it might not have either.  The point is, your phone is unlocked and will work on AT&T no matter what SIM card is in it.  So if you’re gonna take this to an AT&T Store to get your phone number moved to the new phone, you take it in its box and tell ’em it’s gift, and you tell ’em that it’s unlocked, and they’ll set you right up.  You can switch SIM cards yourself if you want to try, but if you’re gonna go to AT&T, don’t let them tell you it’s a T Mobile phone.  It’ll work on both, and unlocked. It’ll work on AT&T.

CALLER:  Thank you very much.

RUSH:  You stand by so we get your address and send it to you.  I just… I don’t take the shrink wrap off, folks.  I don’t open them to see what’s in there.  So I’m just giving you heads-up as to what you’re gonna find based on what I know is inside the box — and Joe, I appreciate the call.