Pelosi’s Challenger Is Right: The Democrats Are a Coastal Party


RUSH: Folks, we do have two Americas right now, and this Tim Ryan guy that wants Pelosi’s job is right: The Democrat Party is not a national party anymore.  Now, stop and think about that for a minute, because he’s right about it.  But it took an election to reveal this.

Prior to this election everybody thought the Democrat Party was the majority party and it was on its way to transforming America and that a very small and declining-in-size minority of Americans were opposed to this transformation.  There were many of you who were thinking, “My God, we are so outnumbered, it’s over! We’ve lost the country. Rush, it’s time for you to tell us it’s time to panic.”  And it turns out that that whole picture was an illusion.

It wasn’t true, and it wasn’t even close to being true — and one election exposed this illusion, which had been presented to us by the Democrat Party. But the media is the primary culprit. The media with the ability to shape public opinion just with the telling of stories — not even reporting the news, just sharing of anecdotal things — is able to portray and paint a picture of America that just isn’t the case.  One election shows the Democrat Party’s not even a national party. 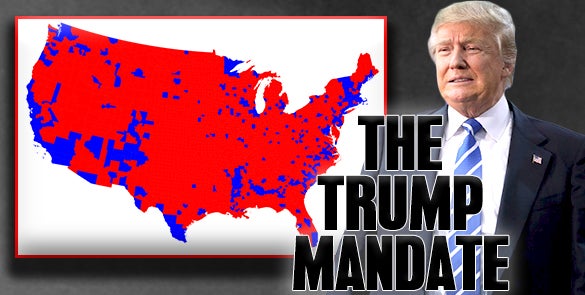 And the stuff that makes America work and makes America great is all in the middle, in a sense.  And they aren’t there.  But even if you disagree with that premise — you know, where the people who make America work live — the fact of the matter is they are not a majority party.  They do not represent a majority of thinking, and yet look what they have been able to do the last eight years, living that illusion.  They’ve been able to totally change the definition of marriage.

They have totally uprooted America’s pop culture.  They have taken over education.  And that’s why there’s a special kind of stupid now that dominates the thinking of the Democrat Party.