RUSH: “Donald Trump has chosen charter school advocate Betsy DeVos as his secretary of education.”  A charter school advocate!  This is gonna cause heads to explode in every teachers union building and bunker that there is.  Holy smokes, this is big! Betsy DeVos! You know the DeVos family.  Staunch conservatives, Rich DeVos, Amway, owns the Orlando Magic.  Great, great, great guy.  This woman becomes the second woman chosen to fill a spot in Trump’s cabinet.

RUSH: Let’s grab a call quickly.  Marty in Reading, Pennsylvania.  How are you, sir?

CALLER:  Pretty good.  How are you, sir?

RUSH:  Good. Thank you very much.  How are you?

CALLER:  I’m good.  I just wanted to give you a call and hopefully the Trump people listen to your program and realize how many people that voted for him hope that he fulfills his campaign promises and that he goes after and prosecutes Hillary.  I mean, if anyone — a normal person — would have done the things she’s done, we would have been in prison without looking for daylight.

CALLER:  Even after she did the Benghazi debacle —

CALLER:  — she should have been prosecuted then.  I can’t believe that they left her alone.

RUSH:  Well, maybe they won’t.  Marty, I’m gonna address this in great detail in the next segment, but before you go — I’m asking everybody — would you like a new iPhone 7 or 7 Plus?

RUSH: Big one.  What’s your carrier?

RUSH:  All right!  We gotcha covered.  I’ll make sure you get a jet-black Verizon iPhone 7 Plus.  Do not hang up so Mr. Snerdley can get your address so we can FedEx it to you.  If all goes well, you will have it on Friday.

RUSH: Michael in Bellmore, New York.  Michael, welcome.  Great to have you on the program, sir.  Hi.

CALLER:  Thank you for taking my call, Rush.

CALLER:  Happy Thanksgiving to you and your family.

CALLER:  I wanted your thoughts about these picks by President-Elect Donald Trump. 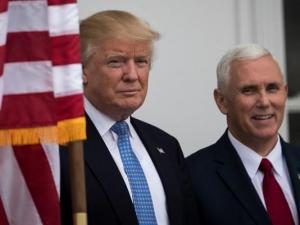 RUSH:  Okay, so you’re obviously surprised that these picks are much more conservative than you think Trump is. So you’re thinking somebody’s gotta be making these picks and it isn’t Trump or it’s —

CALLER:  Well, it’s Trump, but with them much more included, like Governor Pence is, you could see he’s very involved.

CALLER:  Can you see him eight years in Washington?

RUSH:  Yeah, if he said that right now, yeah, I’d be stunned.  I would be totally stunned.  I can’t believe he would undercut — if he announces that he’s leaving after four years, that is the biggest the message the left could get to shut him down on everything.  I don’t believe he’s even thinking that way.  I really don’t.  Look, we’ll talk about this in greater detail, but I’ve gotta ask, do you want a new iPhone 7 or 7 Plus?  Time is running down and I want to make sure I offer it to you.

CALLER:  Yes and I’m actually gonna give it to my wife.

RUSH:  I have restocked.  I now have iPhone 7s in colors, so we’ll send her a rose gold.  I’m telling you, she will love it.

RUSH: Wait ’til we see his nominees.  For example, his nominees… You ought to see my little tech bloggers.  They are paranoid that Trump’s gonna do away with net neutrality.  They are paranoid at the names Trump’s bandying about for the FCC.  They want net neutrality.  They want the government in charge of the internet.  They want the government punishing cable providers and ISPs who overcharge these little Millennials who don’t want to have to pay for anything.

If you take a look at the reaction to Trump’s cabinet appointments and regulatory board appointments so far, there’s nothing to complain about other than Romney, and we don’t know if that’s gonna happen.