The Establishment Thinks Trump Has No Plan


RUSH: Let me read to you just a bit from a column today by JPod, our old buddy John Podhoretz writing in the New York Post.  I’m not gonna read the whole thing, just a few relevant excerpts here.  “But we’re missing one profound thing about Trump, and we keep missing it,” he’s talking about himself and the buddies in the media, “and we will continue to miss it: Trump is not a politician.

“He doesn’t think of himself as a politician, and he doesn’t act like a politician, and we’re all desperately trying to fit him into our understanding of what he’s supposed to be.” (translated) He’s running for president.  He got elected.  That means he’s a politician.  That means X, Y, and Z and A, B, and C.  But he’s not any of those things! So we keep trying to make him what he’s not, because he has entered our arena, and he better be what people in our arena are.  But he’s not.

What he means by that, when a George W. Bush announces for the presidency and then runs, you are able to discern what his agenda is, what his program is, what his beliefs are, his fundraising structure. You are able to learn everything about Bush and who he is, and you can judge and report on him accordingly.  With Trump they can’t figure it out.  Because with Trump they can’t find an organizing principle.  They can’t find the lifelong reason he’s wanted to do this.  And then Podhoretz’s next line:

“What if Trump has no plan? That seems the likeliest interpretation of his tweeting and even the bizarre rigmarole surrounding his consideration of Mitt Romney to be secretary of state.”   So they’re honestly sitting there, after having listened to Trump for a year and a half, after having watched Trump — or at least they’ve had the opportunity — assuming he’s got no plan.  Well, he most certainly does have a plan, and he’s been very clear about it.  He’s been very precise about it.  What is it about it that these people don’t see?

Why are they not able to listen to what Donald Trump says he’s gonna do and believe he means it?  Well, they don’t believe it and they don’t believe anybody in their world would ever speak this way, would ever have think kind of agenda or these kinds of objectives, and so nobody else would either. No reasonable person could possibility behave like Donald Trump does, not in our world. “What if Trump’s got no plan?”  He’s got no plan?  His plan is what’s behind him running for office.  His plan is to make the country great again!

His plan is based on his and millions of other people’s belief that this country is in decline and dwindling away in ways it shouldn’t be — and the one thing we know. The people in Washington — both parties, wherever they are — think tanks, magazines, media, elective office, doesn’t matter. We know they have never thought at any time in the last eight years that this country’s in crisis.  That has been the great dividing line.  We’re out here thinking we’re on the verge of losing the country, and they’re laughing at us for thinking so.

Because in of their world, everything’s fine.  Their kids got into private school. They all have their incomes. They live in the areas they want to live. They go to restaurants and cocktail parties. Everything’s fine! They cannot possibly understand people that think the country is in crisis, that we’re on the verge of losing it.  So it’s obvious they can’t, then, comprehend Trump’s plan.  Even if they did, they don’t agree with it or think it’s legitimate.  But it’s worse than that.  They don’t even think he has a plan!

How do you say that when you look at his transition?  Improvising?  How do you say there’s no plan, that he’s just getting up every day and going through the motions, throwing it up against the wall to see what sticks?  Back to Mr. Podhoretz.  He says, “We would like to grasp the outlines of a Trump foreign policy doctrine and to establish the contours of his approach on domestic matters. But the truth is there’s precious little to grasp, and it’s likely whatever contours there may be are as unclear to him as they are to us.”

This is why I said earlier: They are never gonna understand him, they’re never gonna figure it out, because he’s not one of them. He doesn’t come from their world. They can’t plug him into whatever cookie-cutter molds they have there in the establishment for plugging people into, and so since they can’t plug him into one of their molds, he’s not real. He’s just going through the motions. He has no plan, he’s improvising — and, as such, he’s not bright.

Underlining all this is: This man cannot be smart. He just can’t be IQ, intellectually with it, if he’s not willing to include us in things like this.  He says, Podhoretz wraps up, “I don’t find this analysis reassuring. But I think it’s true. And if it is, then the way everyone is going about trying to understand this entirely new phenomenon in electoral politics and presidential leadership is hopelessly misguided and needs to change.”  He’s right about that.

CALLER:  Thank you, Rush.  I’m calling in to what you kind of started the show with, the media, the establishment, the Drive-Bys, the left not understanding Trump —

CALLER:  — as a private citizen, as opposed to a lifetime politician.  I think the one thing… I agreed with most everything you said, but the one thing that we miss — and I’m a conservative.  I do this as much as they’ve done it to us over the last eight years. When theories disagreements or lack of understanding, we just say that on the other side doesn’t get it. “They’re dumb. How can they not grasp the fact that this guy has this movement or whatnot?” When in actuality, I believe they grasp it fully, and the problem is, their fear is not that he keeps the media out and uses Twitter or things like that, but that he’ll actually succeed.

CALLER:  Correct.  Correct.  When you talk about, you know, adolescent arrogance or, you know, laughing him off or the way that they’ve treated him. Well, he got elected, and they said, “Well, what it couldn’t have happened,” and then, you know, without even being sworn in –without even being, you know, a certified election — he, quote, unquote, saves a thousand jobs in Indiana.  They can’t… That makes their heads explode, not because of the way he does these things. That’s what they’ll say.

You know, they don’t like the fact that he’s brash or he’s a misogynist or this, that, and the other.  It’s that what he does actually works.  But one example I can say is when he was running he was the worst businessman in the world and everything that he touched went bankrupt.  That was their plea.  Well, now that he’s elected, they’re bringing up the fact that he has successful businesses in over 35 countries in hotels and this, that, and the other and he needs split time.  They go with whatever message they can because they know he can be successful, and I believe that’s their true fear.

They used the same tactics, the same theories, the same philosophies, the same tricks — and as they kept failing, they kept trying more of it.  They never adjusted, ’cause I don’t think they knew how.  In their world, money equals success.  Jeb Bush was gonna win ’cause he had $115 million PAC.  That was it!  That’s all they needed.  They were gonna be able to wipe everybody else out with that.  They got six delegates with their $115 million, and I will guarantee you they’re still scratching their heads over this.

There’s resentment, and they may… When you say they understand, I think they’re fully threatened precisely ’cause they don’t know how to stop him.  The media doesn’t know how.  Every tactic the media has used to successfully destroy Republican candidates, Donald Trump has not only survived, he has thrived. He’s built on and he has expanded his base, after each one of these assaults.  I guarantee you, they don’t understand it. (interruption) And if… (sigh) We’ll find out.  You know, politics, Hollywood, everything’s a copycat industry.

Let’s see if the next time around the Democrats try to come up with their own version of what they think Trump is.  That’ll be another way we find out whether or not they understand it or not.  Could they go out and find somebody in America in the Democrat Party who is their version of Trump? (interruption) Okay, you could throw some name and address out.  But will they do it?  Would they do it?  Would they go get an outsider? (interruption) You think so, huh?  Well, the difference there is the Republicans didn’t go get Trump.

They fought him, too. 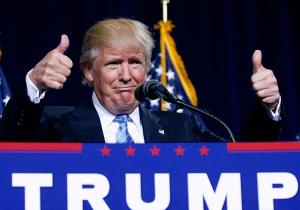