A Rush Baby from Africa


RUSH:  Benjamin, Miami Gardens, Florida.  Great to have you on the EIB Network.  Hello.

CALLER:  Yes.  Quickly I wanted to say I found out, I discovered your channel when I was in New York.  I’m originally from Ivory Coast, West Africa.

CALLER:  Yes, so you have a Rush Baby in Africa.  Of course I live in America, but —

RUSH:  Do you know my wife spent some of her childhood years in Guinea-Bissau.

CALLER:  I learn so much by listening to you over the course of the years, it’s unbelievable.

RUSH:  Well, I appreciate it. I really do.

RUSH:  If you were giving medals out, I would accept one from you.

CALLER:  (laughing) Listen, my question was the following.  I mean, before the election, we heard that President Obama had the highest rating, 55% or something like that.

CALLER:  I think listening a few minutes ago you said something about the Democrats and Obama’s policy was sent packing. I think you probably answered all of my questions.  I just wanted to know, why does it happen?  I mean, if people approve him that much, how come they didn’t vote for whoever he was supporting?

RUSH:  Well, there’s no way of knowing for sure, but I can tell you what I think, because it doesn’t make sense.  I mean, Obama, he campaigned and he specifically asked people to vote for Hillary to save his agenda.

RUSH:  To continue his — so he made this campaign about him.  We have to acknowledge that.  He didn’t say elect Hillary ’cause she’s great.  Well, he did, but he also said you need to save my agenda.  You need to show up and vote for Hillary so that my work can continue.  So he put himself on the ballot.

RUSH:  — won 83% of the geographic area of the country.  And if you map that, you’re gonna see the Democrats’ strongholds are New York, Los Angeles, San Francisco, maybe a little bit of a Seattle, and Chicago.  You’re gonna see coastal and then the little outpost in Chicago —

CALLER:  The blue spot on the edges, yeah.

RUSH:  Exactly.  So what I think explains Obama’s approval numbers is that he’s a likable person.  The average American who sees Obama on TV, he’s a likable guy. He comes off as intelligent, and I think there is a distinct racial component.  I think that people, when talking to pollsters and other people they don’t know, when being asked to render an opinion on the president, will tend toward the positive to avoid anybody perceiving them as not liking him simply ’cause he’s black.

So to eliminate any possibility that the pollster or others might think that they are racist or discriminatory, they will say, “Oh, yeah, I love Obama. I approve of the job Obama’s doing.”  But when you poll his policies and he’s not part of the question, it’s a totally different story.  Obamacare, amnesty, they’re way down on the approval list.  They’re nowhere even 40.  But you put him in the question and he goes to 53, 55, as you said. I just think it’s the racial component, and I think there’s a lot of guilt in America about racial matters and people just find it the course of least resistance —

RUSH:  — to say that, “Oh, yeah, Obama, love the guy, love the job he’s doing,” and everybody goes away happy.

CALLER:  Well, it’s unfortunate people cannot express their true feelings, you know?  This is America, after all. I don’t get it.

RUSH:  Benjamin — (laughing) — you just zero in on it, man, especially in America. 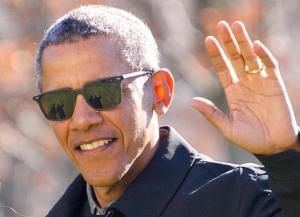 RUSH: — and yet you’re asking, it’s a legitimate question.  How in the world can this happen, if the president’s got a 55% approval number, which is astronomical at this time in a second term, it’s astronomical, like George Bush was in the thirties here.  Now, there’s another answer, too.  The media has not spent any amount of time beating up on Obama like they do most presidents.

RUSH:  So there’s a lot of factors here.  But I don’t think you can eliminate the racial component, ’cause it’s real simple.  Poll Obama’s policies without him in the question, it’s bad, bad news.  Same questions with Obama in the question, totally different reaction.  So, anyway, I actually think, Benjamin, that the racial component here has been a detriment in that it has paralyzed legitimate criticism.  It has paralyzed and prevented legitimate debate.

I mean, he’s the president.  He’s historic, the first African-American president, but, okay.  Fine.  Feel good about it, but he’s still the president.  What he does really, really matters.  And to have debate about that shut down simply because of his race is a paralyzing thing that’s not good for anybody, but I think that’s what happened.  I have to go, Benjamin.  I really appreciate your call.  Thank you much.